Please ensure Javascript is enabled for purposes of website accessibility
Log In Help Join The Motley Fool
Free Article Join Over 1 Million Premium Members And Get More In-Depth Stock Guidance and Research
By Jennifer Saibil - Mar 23, 2021 at 8:15AM

Sales are strong, but that's not the whole story.

While many small restaurants were crushed by the pandemic, the larger chains were able to weather the storm, and many companies that offer takeout and delivery even thrived.

Grubhub (GRUB), a food delivery service that has partnerships with restaurants, has powered many of the deliveries during the pandemic, and posted higher sales. But its net loss also widened, and it announced last June that it will be acquired by Dutch food delivery service company Just Eat Takeaway(JET 1.14%), which operates services on several continents. Is it time to buy? 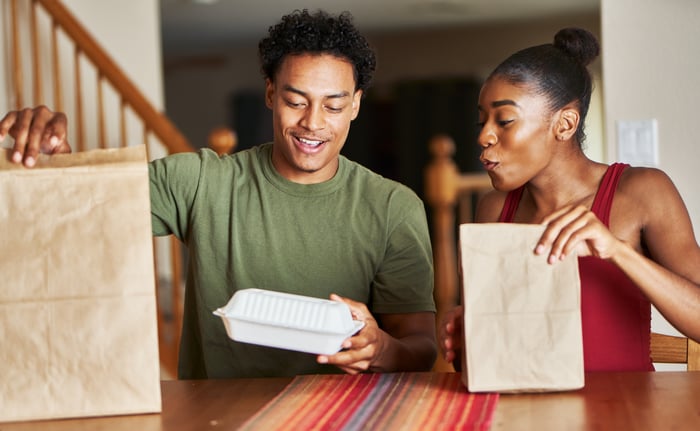 Serving the country under lockdown

Grubhub is the oldest of the food delivery services, which include competitors Uber (UBER -3.28%) Eats and DoorDash (DASH -10.74%). DoorDash has become the largest of the group by sales, with $2.9 billion vs. Grubhub's $1.8 billion in 2020, and DoorDash's fourth-quarter revenue increased 26%. That said, Grubhub still saw a 38% increase over 2019 sales, and fourth-quarter sales increased 48%. Losses widened from $28 million to $68 million in Q4, but EBITDA increased 17%.

The first question I would ask when considering Grubhub's future is whether that type of growth is sustainable as restaurants open their doors and customers don't require Grubhub's services as frequently and they did in 2020. The next question would be how the acquisition will affect shareholders.

The largest food delivery service in the world

Just Eat Takeaway (JET), which is based in Amsterdam, doesn't currently operate in the U.S., but it owns food delivery service companies all over Europe, Canada, Australia, South America, and the Middle East. The acquisition of Grubhub will give it a foothold in the U.S., and also make it the largest online food delivery service outside of China. Shareholders will receive 0.671 shares of JET for each share of Grubhub, based on the price in June 2020 (when the announcement took place) of about $75.15. The merger is meant to go through in early 2021, so it should be right around the corner.

The purchase of Grubhub is meant to help both companies scale and reduce redundancies, eventually moving toward making a profit.

Grubhub is still a fairly small company, with just over half a billion dollars in fourth-quarter sales. Though it's lost market share to newer rivals, there are still ways to grow.

The ability to scale with JET's assistance will be important for Grubhub's future. For example, DoorDash posted a profit in the second quarter as sales skyrocketed. It have since posted two quarters of losses as it invests in its capabilities, and Grubhub has that same opportunity as it becomes part of a larger entity. DoorDash is also adding clients beyond restaurants, such as grocery and convenience. As of this time last year, Grubhub had higher revenue that DoorDash, but that changed during the pandemic.

Gruhub will have to look for new growth opportunities as well if it wants to stay competitive.

Grubhub stock reached a high in Sept. 2018 after several years of growth, but it has since tumbled, losing as much as 81% over the following 12 months. Ouch. It's already down 17% in 2021, and at below the sale per share price of $75 when the deal goes through, there are some gains to be made if you buy today.

But forward-looking, with the market becoming more crowded and the company losing its top spot to DoorDash, I would hold off on purchasing Grubhub stock.