Even with the near-50% rally Grubhub (NYSE:GRUB) staged at the end of the year, 2019 was not good for investors in the food delivery specialist -- who still lost more than a third of their investment. Yet it was mostly a disastrous third quarter earnings report, where revenue failed to meet expectations, and guidance for the fourth that was well below what was forecast that caused much of Grubhub's stock decline. All told, shares fell more than 40% in one day.

Although the stock has made up much of the loss that day, Grubhub still trades below where it was before the earnings report and even some in the food industry don't see much hope for long-term recovery for the food delivery leader -- or others in the space, for that matter. 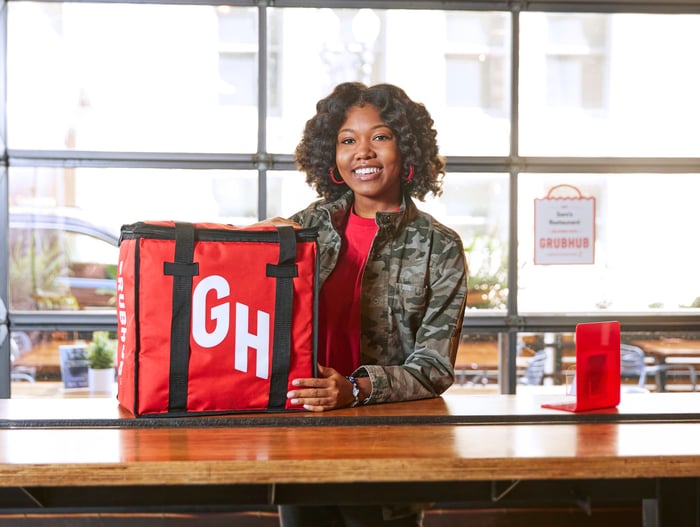 Getting behind the wheel

In a recent interview with Yahoo! Finance analyst Brian Sozzi, Domino's (NYSE:DPZ) CEO Richard Allison predicted the carnage in food delivery was not over, because "delivery as a service that these third parties are offering [is] not sustainable in its current form."

He singled out Grubhub for special criticism, noting that after changing its business model from order aggregator to third-party delivery, it decimated its income statement. "They have grown revenue very rapidly but their profit has declined to almost nothing," he told Sozzi, who also noted Uber Eats lost nearly $1 billion in operating profits over the first nine months of 2019, nearly triple what it had done the year before.

Allison could just be making self-serving statements, since third-party delivery services have been, well, eating Domino's lunch over the past four quarters.

The world is your menu

Just prior to Grubhub's earnings report, the pizza shop issued its own financial results, and though it had notched its 34th consecutive quarter of positive same-store sales growth in the U.S., growth has slowed dramatically, and Allison blamed third-party delivery apps at competing fast-food and casual dining chains for the decline.

For a long time, pizza was the only real game in town when it came to having food delivered, and Domino's -- which steadfastly refuses to use third-party outlets, preferring instead to rely upon its own drivers -- was one of the most convenient options.

But the rise of DoorDash, Grubhub, Uber Eats, and even Postmates has leveled the food delivery playing field and cut into Domino's dominance. Now a hungry consumer can order delivery from Burger King through DoorDash and Postmates, Taco Bell and KFC from Yum! Brands' partnership with Grubhub, and even from rival Papa John's through a mix of DoorDash delivery and its own drivers.

Yet you can't dismiss Allison's analysis of Grubhub's situation. As Sozzi noted, the massive losses accumulating at Grubhub, Uber Eats, and even DoorDash, which is estimated to be losing half a billion dollars annually, is not sustainable, and it's likely there will be industry consolidation in the near future.

There also needs to be a greater focus on making profitable sales. Grubhub added nearly a million active diners in the third quarter compared to the second, but the number of orders placed on its platform -- what it calls daily average grubs -- declined by 6%. CEO Matt Maloney blamed customers for being "promiscuous" and not having loyalty to any one platform anymore.

It's the exact situation Domino's is suffering from: the proliferation of food options available for delivery means consumers no longer have to settle for one kind of food or get their meals delivered from a single app. Whatever cuisine they want, it's now a tap away.

That doesn't bode well for Grubhub in 2020 as competition is only getting more intense. Mahoney told investors in his shareholders letter the meal delivery company "will be moving quickly, spending more and trying many different strategies" over the next year or so, hinting that the effort to keep customers loyal is going to further erode earnings.

It will be offering rewards and incentives to consumers who use Grubhub often and to restaurants for participating on its platform. That could continue the scenario where sales still rise, but profits continue to evaporate.

Even with Grubhub's decline over the past year its stock remains overvalued, at more than 200 times projected earnings, three times its sales, and more than 26 times the free cash flow it produces. It's hard to envision a scenario that doesn't have Grubhub digging itself a deeper hole in 2020.