Please ensure Javascript is enabled for purposes of website accessibility
Log In Help Join The Motley Fool
Free Article Join Over 1 Million Premium Members And Get More In-Depth Stock Guidance and Research
By Rich Duprey - Oct 27, 2019 at 8:36AM

The food delivery service has been losing ground to the competition as its own growth slows.

Grubhub (GRUB) got a short-lived boost from announcing a partnership with McDonald's in the New York City area. Nevertheless, competition from DoorDash and Uber (UBER 0.47%) is intense (until recently UberEats was the exclusive partner of the burger chain), and investors are increasingly concerned about the meal delivery specialist's decelerating growth rates.

Second-quarter earnings show Grubhub's revenue beating analyst expectations with a 36% increase, but it was the third straight quarter in which revenue growth declined year over year. As Grubhub prepares to report third-quarter earnings on Tuesday, Oct. 29, let's take a look at what investors might expect. 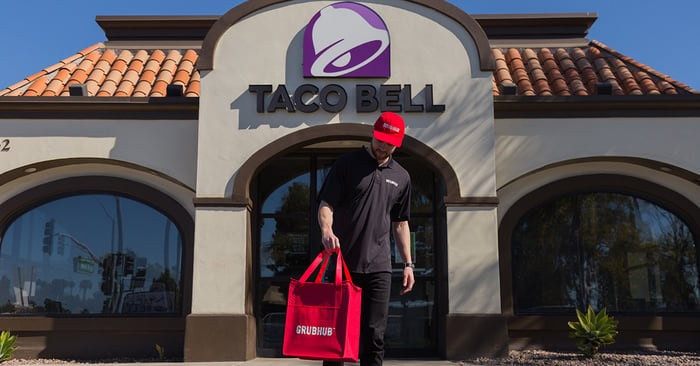 Stuck in a traffic jam

Not only is the meal delivery field crowded, but competitors are gaining ground while Grubhub is slipping. Data analytics firm Second Measure said Grubhub to lose ground to rival DoorDash as the latter gains market share and the former loses it. Using anonymized credit card data, Second Measure says DoorDash grew its market share between June and October from a 33.8% share to 34%, while Grubhub slipped from 32.7% to a 30% share. UberEats has a 20% share and Postmates 10%.

Although revenue is still growing, with gross food sales -- the total of food, tips, taxes, and delivery charges ordered through the service -- up 20% in the second quarter and the number of new unique accounts growing 30%, the rates of growth are slowing and privately held  DoorDash is growing faster.

Noted short-seller Jim Chanos also believes Grubhub isn't making much money on its customers, generating around $0.15 per order. He says costs will rise as labor costs increase, and it will run into the kind of problems Uber and Lyft are facing in California, which just enacted a law that requires gig economy workers be classified as employees rather than independent contractors.

While Grubhub has a presence in California, Second Measure says it is the most popular delivery service in New York, Boston, and Philadelphia (DoorDash is tops in Dallas-Fort Worth and Houston, which account for more than half its sales).

DoorDash's more parochial nature, though, suggests Grubhub has plenty more country to expand into, even as Uber and Postmates vie for ground.

The delivery service also is making good use of partnerships. In addition to McDonald's, the company has lined up deals with a number of restaurants including Yum! Brands' Taco Bell and KFC chains, Shake Shack, Blue Apron, and Dunkin' Brands, some of which are exclusive deals.

Those could be important as customers return to their favorite place and app in ordering a meal, and locking them into Grubhub's service will help boost sales. About one-fifth of customers currently jump between competing services when placing food orders, according to Second Measure, and as more restaurants like McDonald's seek to give their customers more options, that could happen more frequently. Two years ago, 83% of Grubhub's customers didn't use a competing delivery service; that's dropped to 61% today.

What's it mean to investors?

Grubhub expects its revenue to rise 29% to 38% in the third quarter and 34% to 39% for the full year, representing a further deceleration of growth. Earnings, whether GAAP or adjusted, have also fallen so far this year, and Grubhub expects them to decline anywhere from 0% to 12% in the third quarter. For the full year it is anticipating a 1% to 13% increase, which may be difficult if its market share continues to wither.

The meal delivery specialist's stock is down 26% year to date and off by 45% from its 52-week high, indicating the market has soured on its growing again as fast as it did. It trades at 28 times next year's earnings estimates, which seems pricey given the competitive landscape, but with analysts forecasting it will be able to grow per-share profits at a 24% compounded annual rate, a financial report that just meets expectations could be seen as a driver for better returns.