Please ensure Javascript is enabled for purposes of website accessibility
Log In Help Join The Motley Fool
Free Article Join Over 1 Million Premium Members And Get More In-Depth Stock Guidance and Research
By Leo Sun - Jun 18, 2019 at 8:48AM

Grubhub widens its moat against DoorDash, while Dunkin’ strengthens its digital defenses against Starbucks.

Grubhub will offer the deliveries for free during the last week of June, and plans to expand the service to Dunkin's other markets -- including Boston, Philadelphia, and Chicago -- in the coming months. Let's see how this deal could benefit both companies. 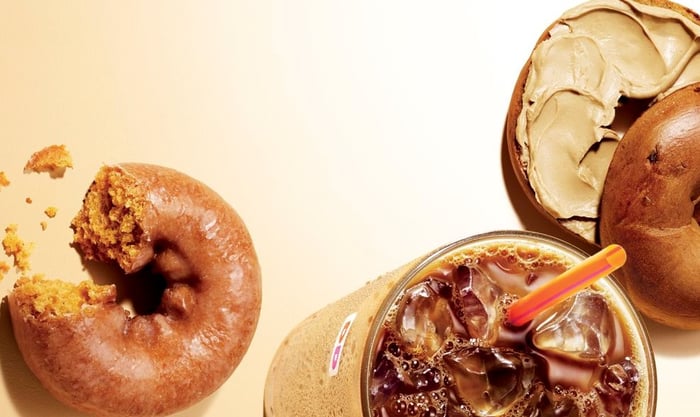 How does this deal help Grubhub?

Grubhub, DoorDash, and Uber (UBER -4.09%) Eats are the three most popular restaurant delivery services in America. Grubhub and its subsidiaries controlled 32% of the market in April according to Second Measure, followed by DoorDash's 29% share and Uber Eats' 22% share.

Roughly a fifth of all three apps' users use overlapping services, so all three companies are jockeying for exclusive deals to lock in users. Grubhub holds an exclusive deal with Yum Brands, DoorDash inked one with Cheesecake Factory, and Uber Eats is McDonald's exclusive partner -- although that golden partnership could end this year.

Grubhub's deal with Dunkin' isn't an exclusive one, and 400 Dunkin' Donuts stores represents just a tiny slice of its 12,900 worldwide locations and Grubhub's network of 115,000 takeout restaurants. Nonetheless, Dunkin's decision to partner with Grubhub is still a testament to the platform's strength in New York.

Dunkin' is looking for regional leaders

Grubhub controlled 68% of New York City's delivery market in April according to Second Measure. Grubhub is also the market leader in Boston and Chicago, where it held market shares of 44% and 40%, respectively. That's probably why Grubhub and Dunkin' listed those cities as the next markets after New York.

Dunkin is also still partnered with DoorDash in certain cities, and doesn't plan to end that relationship anytime soon. Therefore, investors shouldn't confuse Grubhub's Dunkin' deal with the bigger Yum deal, which included exclusive deliveries for KFC and Taco Bell and a $200 million investment from the fast food giant.

A vote of confidence for Grubhub's digital ecosystem

Grubhub is locking in restaurants with an expanding ecosystem of digital services, mostly built on services from LevelUp, the payment services and loyalty points provider it acquired last year. 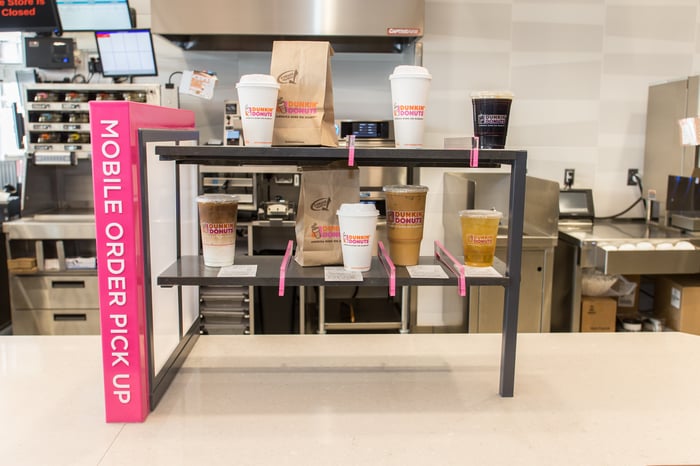 Dunkin's decision to integrate Grubhub's services into its POS system could streamline its mobile orders and widen its moat against rival Starbucks (SBUX -2.23%), which aggressively expanded its mobile ecosystem with payment and loyalty services in recent years. Starbucks also offers deliveries through Uber Eats.

Dunkin's mobile app is mainly used for placing advance orders and picking them up in stores. Those "on the go" orders accounted for 4% of Dunkin's total transactions last quarter, and weekly sales rose 25% annually during the period. Mobile orders also account for over a quarter of its transactions at higher-volume stores in many urban areas.

Integrating more delivery options through Grubhub could significantly boost Dunkin' Donuts' comparable store sales, which rose just 2.4% in the U.S. last quarter. That in turn would offset the weakness of Dunkin's Baskin Robbins brand, which reported a 2.8% comps decline in its U.S. stores.

Grubhub's stock tumbled about 40% over the past 12 months on concerns about its decelerating growth, higher expenses, and rising competition. However, Grubhub remains the market leader in the U.S., and it's much more profitable than DoorDash and Uber Eats.

Partnering with Dunkin' won't move the needle for Grubhub right away, but it could set the foundations for a broader nationwide partnership. As for Dunkin', its digital efforts will get a shot in the arm and strengthen its position against Starbucks and Uber Eats.