Please ensure Javascript is enabled for purposes of website accessibility
Log In Help Join The Motley Fool
Free Article Join Over 1 Million Premium Members And Get More In-Depth Stock Guidance and Research
By Keith Noonan - Jan 22, 2020 at 8:32AM

Looking for stocks that will deliver huge returns? These companies could elevate your portfolio.

If you're looking for stocks that have the potential to post tremendous returns over the next decade, the technology sector stands out as the single best starting place. Tech companies have powered the stock market's returns over the last two decades, and the ability of technology to influence and improve other business fields means that it can power and benefit from the growth of other sectors.

Picking companies with strong competitive advantages that are poised to benefit from tech trends and growth in emerging markets stands out as one of the best ways to fill your portfolio with stocks that will post market-crushing returns. Investors seeking tech companies that can deliver powerful long-term returns over the next decade should consider adding these three companies to their portfolios. 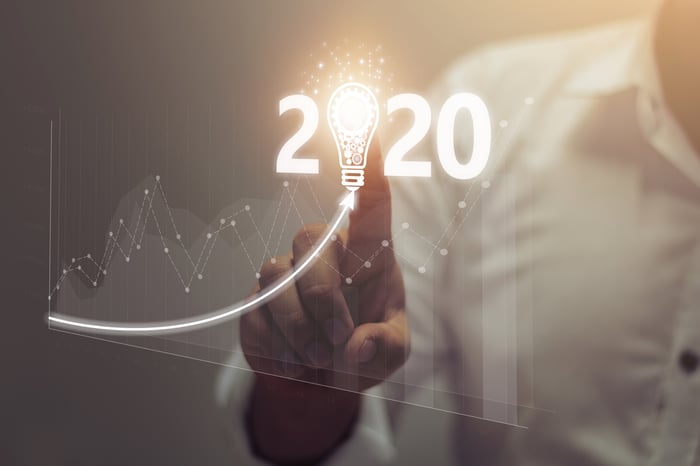 StoneCo (STNE 6.46%) is a leading player in Brazil's payment-processing market and a standout stock for investors looking to profit from "the war on cash" trend. Despite relatively weak economic conditions for the Brazilian economy over the last few years, StoneCo has been posting stellar growth, and the payment-processing market in the country has huge long-term growth potential.

The chart below tracks the growth for the company's revenue and the number of merchant-business partners using its platform to process credit card and mobile-based payments over the last four quarters: 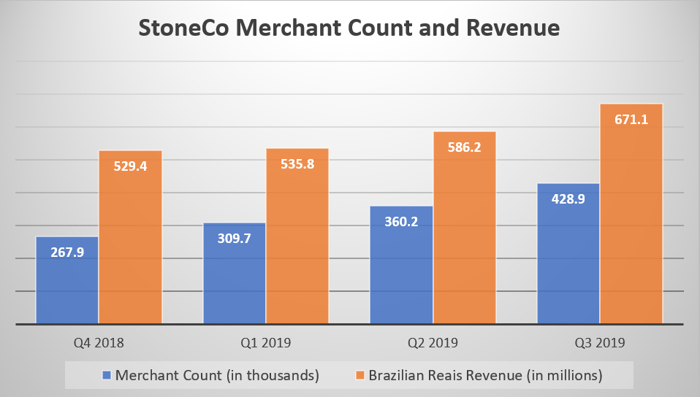 StoneCo's third-quarter merchant count was up 82.8% year over year, revenue was up 62.1% year over year, and net income for the period came in 111.6% higher than the prior-year period. The business is posting strong margins as well -- with a take rate of roughly 1.9% of total payment volume and a net profit margin of 28.5% on total revenue in the last quarter.

StoneCo has a clear path to delivering big returns this decade as the company brings more merchants on board its payment processing platform, bridges customers over to its software support offerings, and expands its consumer-level banking-and-credit services. Brazil has a population of roughly 210 million people. It's Latin America's most populous country and biggest economy, and has a payment-processing market that's at an early growth stage compared to the U.S. and Europe. Factor in the potential to expand its services to other countries in the region, and StoneCo could post explosive growth over the next 10 years.

JD.com (JD 4.15%) is China's second-largest e-commerce company, trailing only Alibaba in terms of market share. Investors concerned that the much-larger Alibaba will tamp down on JD's growth potential should know that the smaller company is backed by Chinese multimedia giant Tencent and has distinct competitive advantages that should allow it to thrive in China's fast-growing online-retail market.

JD is a top retailer of high-end electronics, appliances, brand-name clothing, and cosmetics. Its focus on operating a platform that provides a trustworthy business-to-consumer sales experience is a key differentiator and means that shoppers don't have to worry about winding up with the kinds of counterfeit or low-quality goods that are rampant on many other Chinese platforms.

Evidencing both the tremendous growth of the Chinese e-commerce market and the business's own strengths, JD.com's revenues grew at a staggering compound annual growth rate of 50% from fiscal 2012 through fiscal 2018. The online retailer continues to post impressive growth -- with sales up 29% year over year in the company's most recent quarter.

The business's expanding scale is helping JD grow its margins, with non-GAAP (adjusted) gross profit margin rising from 11.9% in 2015 to 14.7% across the first nine months of the current fiscal year and total adjusted profit margin rising from 0.2% to 2% across the same stretch. The business has also been posting rapid free cash flow growth even as it has spent on scaling up and maintaining its warehouse and overall operational footprint.

The graphic below from JD.com's third-quarter earnings presentation tracks the progression of the company's FCF generation in Chinese yuan (RMB): 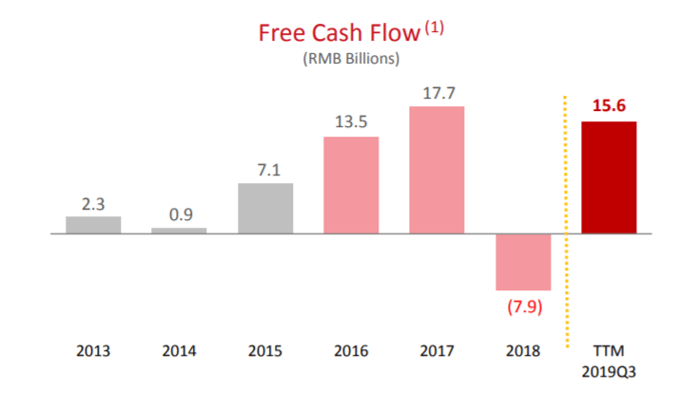 The big FCF drop in 2018 might look concerning at first glance, but it stemmed from capital expenditures nearly doubling to 21.4 billion yuan as a result of the company's expansion push and a one-off slowdown related to the way the company settles marketplace transactions.

JD.com is also a leader when it comes to shipping infrastructure, with more than 650 warehouses, roughly 7,000 pick-up-and-delivery locations, and a forefront position in automated delivery robots. The company is not only using its distribution network to improve the efficiency of its own e-commerce business, it's providing services to third parties -- giving it additional ways to benefit from the overall growth of China's e-commerce and parcel-shipping industries.

If you're looking for a growth stock that's worth holding on to for the ultra-long term, Activision Blizzard (ATVI 0.69%) should be on your short list. The video game company has already delivered stellar performance over the last decade, but it has a variety of favorable operating tailwinds and business strengths that suggest that it still has huge potential.

The hit-driven nature of the video game industry means that investors should go in with the understanding that there will be ups and downs in the business cycle. However, Activision Blizzard's stable of hit franchises, proven development studios, and decades of marketing experience put it in good position to be a lasting leader in interactive entertainment.

The industry looks poised for big growth -- with a report from GlobalData suggesting the market could grow from $131 billion in 2018 to $300 billion in 2025. Compared to entertainment industries like movies or music, the video games business is still relatively young -- particularly in many international markets.

Consider that India, with its population of roughly 1.4 billion people, is expected to generate over $1 billion in revenue from mobile games for the first time ever this year. For comparison, the U.S. mobile market was worth roughly $10 billion in 2019 despite having a population that's roughly a quarter of India's. The domestic market still offers paths to expansion for Activision Blizzard, but tailwinds created by growth for the global middle class will likely be a bigger tailwind in the decades to come.

Activision Blizzard also pays a dividend, and while its yield is relatively small at roughly 0.6%, the company has raised its payout every year since it initiated a dividend in 2010. Its low payout ratio puts it in good shape to continue hiking its distribution. With compelling business strengths and a growing returned-income component, Activision Blizzard is a top bet on the future of entertainment.