Please ensure Javascript is enabled for purposes of website accessibility
Log In Help Join The Motley Fool
Free Article Join Over 1 Million Premium Members And Get More In-Depth Stock Guidance and Research
By Royston Yang - Jan 22, 2020 at 10:41AM

The toy industry is in constant flux as kids find new ways to entertain themselves. Hasbro has been evolving to keep up with the times.

Hasbro (HAS 2.40%) is one of the largest and most progressive global toy companies. It owns a portfolio of beloved toy brands, including Monopoly, Play-Doh, Power Rangers, and My Little Pony. Results from the first nine months of 2019 were solid: Though revenue was only up 3.2% year over year, Hasbro managed to increase its operating profit by 44.0%, and adjusted net earnings per share were up 12.3% year over year.

Shares of the company hit an all-time high of $124 per share in July 2019 before settling down to its current level of $106, and shareholders enjoyed a 30% capital gain last year. This great performance is not without reason though -- the company has demonstrated its ability to evolve with the times by leveraging its strengths as a toy company to create multiple streams of income. Its recent acquisition of Entertainment One for $4 billion will further strengthen its stable of brands and has the potential to boost revenue and profit growth even more. The company reports its fourth-quarter and full-year earnings on Feb. 11.

In fact, the division with the highest growth rate of 23% year over year (for the first nine months of 2019) was the entertainment, licensing, and digital division, underscoring the importance of tapping into tie-ups and licenses to generate an alternative source of revenue. Here is a look at three ways Hasbro has evolved, and how it's been able to grow its toy business over time. 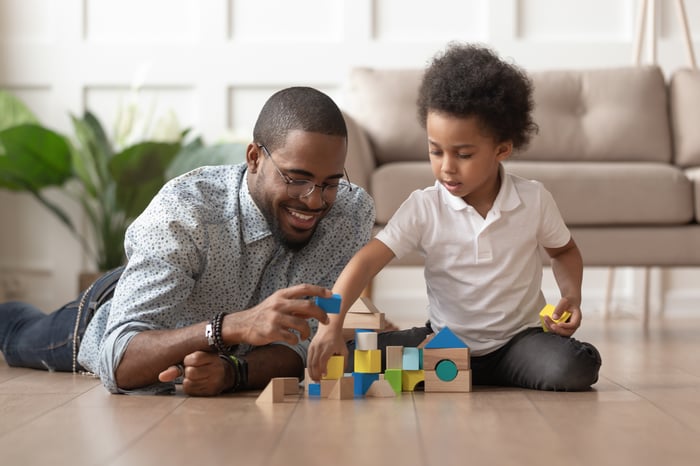 Brand-building is always an important aspect of marketing, and Hasbro tied up with two partners, Kingsmen Creatives and Kilburn Live, during 2019 to build up their best-selling Nerf blaster brand. A licensing agreement was signed back in Feb. 2018 with Kingsmen Creatives in Singapore to open Nerf Family Entertainment Centers (FEC) across Asia. Kingsmen will conceptualize, create, build, and operate these centers while paying Hasbro a licensing fee for using the Nerf brand. The world's first Nerf FEC opened in Singapore in Oct. 2019.  Hasbro has also expanded the licensing agreement to eventually bring these centers to the U.S. market. The first U.S.-based Nerf FEC is slated to begin operations in 2020 and will bring in even more licensing revenue for Hasbro.

Hasbro's partnership with Kilburn Live involves a new entertainment touring event, Nerf Challenge. The attraction was open from Dec. 7, 2019 through Jan. 5, 2020 in Los Angeles and featured a 50,000 square-foot arena with obstacles and play areas for an action-packed experience.

Nerf Challenge will be rolling out across multiples cities in the U.S. and Canada during the year. This focus on live play and events for Hasbro's iconic toy brand helps the company better connect with and engage its loyal fan base, encouraging repeat purchases and strengthening brand identity.

A My Little Pony animated feature is being planned for 2021 in partnership with Paramount. This brand has grown over the last 10 years into a global lifestyle franchise with billions in sales. Hasbro needs to reimagine the brand, invest in content, and release a movie with a new, refreshed storyline that will capture the hearts (and wallets) of its young fans.

These methods are lucrative as kids love a great story that involves their favorite lovable characters. With movie and TV series tie-ins with movie studios, Hasbro can open up a strong source of recurring revenue.

A third area that Hasbro is working on is in multiplayer video games and esports. According to a late 2019 presentation made by Christian Cocks, president of the Wizards of the Coast gaming division, Hasbro intends to be a leading publisher of fantasy games across any platform. The company has two key gaming brands, Magic: The Gathering and Dungeons & Dragons. The former boasts around 40 million players and double-digit annual revenue growth over the past 10 years. The launch of Magic: The Gathering Arena has sought to further connect players from around the world in a massive, multiplayer online adventure experience.

The idea is to eventually launch this platform in the esports world, creating a viable and potentially rewarding new revenue stream for Hasbro. With the overall esports market expected to reach $2.2 billion by 2023 and growing at a compound annual rate of 18.6% from 2018 to 2023, there is massive potential for Hasbro to tap into this opportunity with its iconic brands.

Investors are in for an exciting time as the above three initiatives take root. Though Hasbro shares are trading at a premium valuation of 25 times forward earnings estimates, it's clear that many investors are optimistic about the company's potential and willing to pay for that growth. Hasbro's reputation as an innovative toy manufacturer should allow it to prove naysayers wrong and help it to propel revenue and net income to new records.