Please ensure Javascript is enabled for purposes of website accessibility
Log In Help Join The Motley Fool
Free Article Join Over 1 Million Premium Members And Get More In-Depth Stock Guidance and Research
By Adria Cimino - Jan 22, 2020 at 9:00AM

The apparel retailer's decision to halt its Old Navy spinoff is good news, but only a new leader and strategic plan can mark a clear start to recovery.

On Jan. 16, Gap (GPS -6.04%) announced its decision to cancel the spinoff plans for its Old Navy brand. Investors seem pleased with the news as the stock has enjoyed small gains in the days following the announcement. 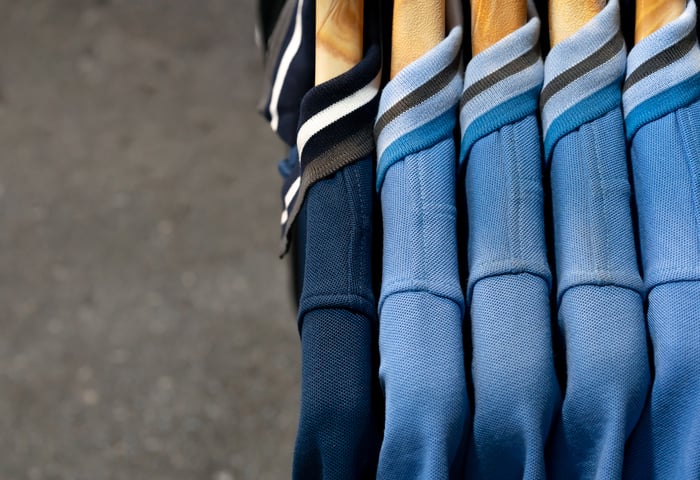 Though this decision is a clear step in the right direction, the embattled company still faces plenty of headwinds. Mall closures, retail competition, and the absence of a permanent CEO will continue to put the brakes on any significant share gains in the near term.

Gap's former chief executive Art Peck first announced the spinoff plan last year. The idea was to offer Old Navy, the retailer's strongest brand, financial independence so it could continue to grow, unhampered by flagging sales at Gap's other brands. Even at that time, some worried about the costs of such an operation and the survival of the weaker brands, including Gap itself and Banana Republic. When the company announced the unexpected departure of Peck in November, concerns deepened about how it would proceed with the spinoff plan.

Spin off to gain strength

To make the matter more complicated, Old Navy was no longer generating stellar results. In the third quarter, the brand's same-store sales were down 4%, a complete reversal from the prior year's 4% growth. In fact, Old Navy's comparable sales have declined in each of the past three quarters, a worrying trend for a brand that was being positioned to survive on its own.

This latest decision to keep Old Navy under Gap's umbrella eliminates one element of risk and uncertainty for shareholders, and the overall company's near-term outlook is another bright spot. Gap guided to total fiscal 2019 comparable sales and net sales at the higher end of its previous range of down mid-single digits and down low-single digits, respectively. It also said adjusted earnings for the year would be "moderately" higher than its earlier guidance of $1.70 to $1.75 per share.

While encouraging, these positive points aren't enough to make Gap a buy at this stage. The outlook for malls, where Gap and other brands like Old Navy and Banana Republic are often located, is grim. Credit Suisse analysts, in a 2017 report, wrote that they expect 20% to 25% of malls to close by 2022. Rivals who have aggressively transformed their e-commerce offerings to align with the in-store experience have already pushed ahead, meaning Gap is going to have to play catch-up. H&M, which specializes in inexpensive trendy and relaxed clothes, revamped its online presence over the past two years and reported a 9% increase in net sales in the fourth quarter.

The biggest element of uncertainty, and probably the biggest reason to hold off on investing in the stock, is the lack of a permanent chief executive officer. At the moment, Robert Fisher, son of the company's co-founders, is at the helm and the search is on for someone to take over the role long term. And the company announced last week that Gap brand chief executive officer Neil Fiske will step down. Without these key roles filled, investors are in the dark regarding Gap's strategy and how the company will address its many challenges going forward.

Sure, the stock has suffered, losing 31% in 2019 alone, and the shares trade at only 10.5 times forward earnings estimates as of this writing, close to their lowest levels ever. But until the company provides stability with new leadership and a vision for the future -- now including Old Navy -- it's far too early to bet on a recovery for this retailer.