Please ensure Javascript is enabled for purposes of website accessibility
Log In Help Join The Motley Fool
Free Article Join Over 1 Million Premium Members And Get More In-Depth Stock Guidance and Research
By Anders Bylund - Jan 22, 2020 at 9:57AM

The open-source software vendor is already pulling its weight, but it will take some time to pay down the debt IBM took on for this $33 billion buyout.

Computing titan International Business Machines (IBM -3.92%) announced its latest results Tuesday evening. The report, which covered the fourth quarter of fiscal 2019, edged out analyst expectations across the board and IBM's shares posted a modest gain in after-hours trading.

IBM's fourth-quarter results by the numbers

Big Blue's adjusted earnings fell while the underlying GAAP net profit nearly doubled. The non-GAAP results backed out a $1.9 billion tax benefit from the year-ago period that was scaled down to a mere $14 million in this report.

The entire income statement also carries contributions from Linux vendor Red Hat, which IBM acquired in a blockbuster $33 billion deal that closed last summer. Red Hat reported fourth-quarter earnings of $1.07 billion, up from $863 million in the comparable year-ago period as a separate company. The company is now included in IBM's cloud and cognitive software division, which posted 9% year-over-year revenue growth to $7.2 billion.

IBM is known for its desire to send its cash flow back to shareholders through a combination of generous dividends and substantial share buybacks. That's still a long-term ambition for Big Blue, but the company is tapping the brakes on its stock buybacks for a couple of years in order to pay down the debt that was used for financing the Red Hat acquisition.

On that note, IBM generated $6 billion in free cash flow in the fourth quarter and funneled $1.4 billion of that into dividend payouts. Another $3.4 billion was invested in accelerated debt repayments. Management hopes to complete the Red Hat-related debt service by the end of 2021, restoring IBM's damaged credit ratings to a higher-level investment grade. 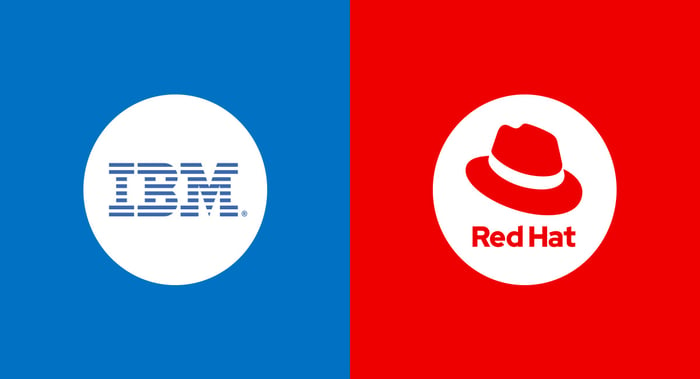 What's next for IBM?

Looking ahead, IBM's management expects GAAP earnings to rise in fiscal year 2020, compared to $10.57 per share in the just-completed year. Adjusted earnings should land north of $13.35 per share, implying at least 4% year-over-year growth. Free cash flow should also increase by roughly 4%, landing near $12.5 billion.

"With this trajectory, in 2020, we expect to grow revenue, operating earnings per share, and free cash flow, and expand operating gross margin," CFO Jim Kavanaugh said in the earnings call. "Within that, we'll maintain a high level of investment focused on hybrid cloud and data and AI capabilities, we'll drive productivity and take structural actions, especially in our [Global Technology Services] business. And remember, we'll continue to face year-to-year headwinds from the divested businesses, especially in the first half, and our P&L will also still have an impact from the Red Hat non-cash purchase accounting adjustments, though less than 2019."

This version of Big Blue, with Red Hat front and center, is finally on track to deliver on the cloud-based strategic shift that started eight years ago, though it's happening while also paying down the massive debt that came with the Red Hat deal. Nothing is ever easy in this rapidly changing tech industry. That being said, I still like IBM as a long-term wealth creator that marries a perennially undervalued stock -- the shares are trading at just 10.9 times trailing earnings -- to a bountiful 4.7% dividend yield. It's a great buy for patient investors.