Please ensure Javascript is enabled for purposes of website accessibility
Log In Help Join The Motley Fool
Free Article Join Over 1 Million Premium Members And Get More In-Depth Stock Guidance and Research
By David Butler - Updated Jan 22, 2020 at 8:30AM

Despite its incredible run over the last decade, shares of the streaming giant are now priced at a rather high premium. The mounting pressure from new streaming competition from the likes of Disney (DIS) is a direct obstacle to continued user growth.

Fourth-quarter earnings out late Tuesday showed year-over-year declines in new membership growth, continued weak cash flow, and a weaker forecast for first-quarter membership growth. On the positive side of the report, earnings did improve. But the stock is still priced very high.

The good and the bad of the latest earnings report 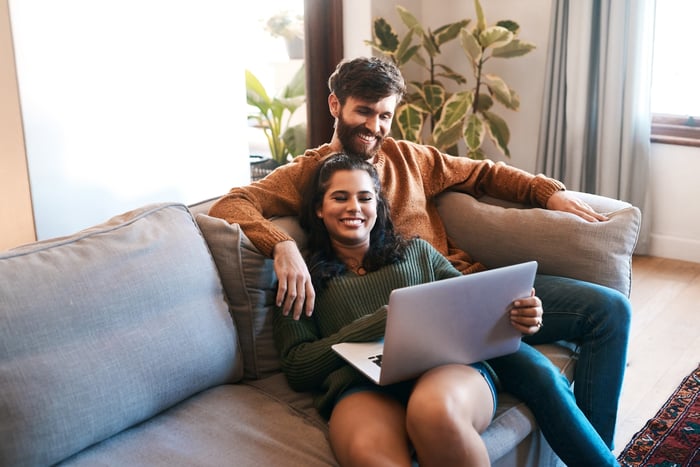 Some might argue that the growth rate remains solid, but remember how much is already baked into the share pricing. There's a lot of future expectation built into Netflix's current stock price, and Netflix needs to grow users substantially each quarter in order to create the revenue and earnings needed to justify the price.

Increased competition is beginning to have ramifications

We've seen some attempts to downplay the effect of competitors that have jumped into the fray recently, but the company's forecasted user growth for Q1 of 2020 suggests otherwise. Netflix anticipates overall paid memberships to grow 16.9% year over year to 174.1 million users. If that forecasting proves accurate, that would be the slowest growth that Netflix has put together in the last six quarters.

In the fourth-quarter earnings statement, the company acknowledged that competition is one of the areas putting pressure on user growth, and that the firm is "working hard to improve our service to combat these factors." When you consider that Netflix has essentially had a niche market all to itself until now, one has to question whether there is really anything the streaming giant can do.

Disney is going all-in on streaming with Disney+. With the company's ownership in Hulu, the integration of assets from 21st Century Fox, and its own massive content library (much of which is slowly being pulled from Netflix), there's a time-tested juggernaut swinging at Netflix with full force.

Apple (AAPL) is involved to a lesser extent with its small lineup of shows for Apple TV, but one has to assume this will grow. Comcast's (CMCSA) NBCUniversal is bringing its streaming service, Peacock, into the fray in April. This will be another streaming competitor that will diminish Netflix's content library. Popular shows like The Office are leaving next year for these new services.

This loss of popular content to others will be truly damaging for Netflix. Integrating the efforts of outside entities was how the service succeeded in the first place. Original content creation is an expensive game, and if Netflix is forced to do more and more on its own, cash flow is going to continue to suffer. Fourth-quarter free cash flow was negative $1.67 billion. The original content that Netflix makes is superb, but you can see from the cash flow statement that it's also expensive and the current production model is not sustainable. As this rising battle progresses, it seems likely that Netflix will have to put more and more cash it doesn't have into original content.

The stock was up in after-hours trading

Shares were up a few points in after-hours trading post-release. In all, Netflix had earnings of $4.13 per diluted share in 2019. That gives the stock a trailing P/E ratio of around 83 times earnings. Shares are simply expensive. Moreover, they're expensive in a segment that is now adding significant competition.

Netflix hasn't really had to handle this situation before. For the first time, it'll face pricing competition and other streaming players with big balance sheets. The company's performance will be analyzed relative to others more now than ever before. This is a new world. As someone who likes value stocks, a lot of progress has to be made to see any additional value in this growth stock.