Please ensure Javascript is enabled for purposes of website accessibility
Log In Help Join The Motley Fool
Free Article Join Over 1 Million Premium Members And Get More In-Depth Stock Guidance and Research
By Travis Hoium - Updated Jan 22, 2020 at 11:01AM

Earnings weren't at all what investors had hoped for.

Let's start with the headline numbers. Revenue in the fiscal fourth quarter dropped 38% to $11.0 million, and net loss was $36.0 million, or $0.23 per share. What's most striking is that gross loss was $23.4 million after noncash charges of $17.5 million due to decisions to end or not pursue long-term power purchase agreements at two plants. Even without those noncash charges, gross loss was $5.9 million. 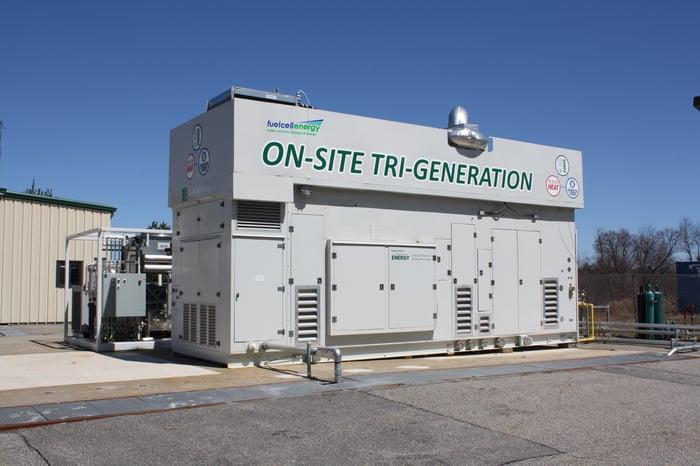 To put the numbers into perspective with what might have been priced into the stock, analysts were expecting $11.5 million in revenue and an $0.11 loss per share. So top- and bottom-line results fell well short of those levels.

Another somewhat surprising number was $1.32 billion in contracted backlog after management suggested in November that backlog was more than $2 billion. The larger number might have included noncontracted projects, but it had been baked into the bullish case traders have been pushing over the last two months.

FuelCell Energy Inc.'s stock had been one of the top-performing stocks on the market over the past two months, and with that performance came rising expectations. Investors were hoping to see revenue growth, margin improvement, and growing backlog, which seemed to be starting to take place when third-quarter 2019 results were announced. The fourth quarter was a big step backward, and with a new restructuring plan that includes a $200 million credit facility and huge cost cuts, it's far from certain when shareholders will see any turnaround in operations.