Please ensure Javascript is enabled for purposes of website accessibility
Log In Help Join The Motley Fool
Free Article Join Over 1 Million Premium Members And Get More In-Depth Stock Guidance and Research
By Travis Hoium - Jan 22, 2020 at 9:23AM

The tech giant is just following the money.

In 2017, Microsoft (MSFT 1.15%) entered the virtual reality (VR) industry with what it called "mixed reality" headsets made by ASUS, Lenovo, HP, Dell, and Samsung. The differentiation of these headsets from early Oculus and HTC Vive headsets was their inside-out tracking, meaning they didn't need external trackers to locate the headset, but they were still tethered to a computer. The concept was novel at the time, but operations were glitchy, and Facebook's (META 1.19%) Oculus and HTC's Vive products were superior even at Microsoft's launch.

Since then, Microsoft has done little to upgrade or support VR, leaving the business to flounder in the market. Today, only the Samsung headset is available on the Microsoft Store online. To end any speculation of a VR update, Xbox head Phil Spencer squashed the idea of VR for Xbox saying, "Nobody's asking for VR." Maybe nobody's asking for VR, but Microsoft is investing in related augmented reality (AR) technology that customers are definitely asking for. 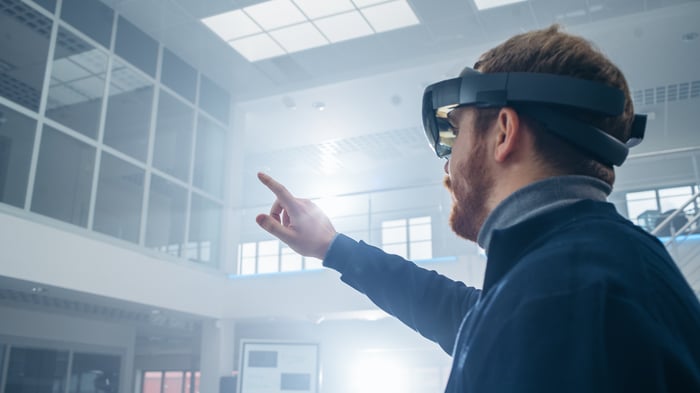 The VR/AR industry is booming, with market intelligence company IDC expecting growth of 79% to $18.8 billion in 2020. But it's not consumer products that are expected to drive growth, it's enterprise applications. IDC projects that spending in areas like investment services and banking will grow at over 100% annually for the next five years. So enterprise solutions are big business, and that's where Microsoft sees its opportunity in AR.

At $3,500, Microsoft's HoloLens 2 AR headset isn't meant to be a consumer device. Its price and design are intended for industrial applications like training, equipment maintenance, engineering, and new product design. Those are areas where a company may see millions of dollars in value for a headset and some customer software, which justify the higher cost compared with a $400 Oculus Quest headset.

But with a higher price comes fewer unit sales. Oculus likely sold over 1 million headsets in 2019, but Microsoft is selling a fraction of that number. In mid-2018, it said sales of HoloLens were only about 50,000 units, and even with a $479 million contract to sell 100,000 HoloLens headsets to the U.S. Army, this is a fairly small business. But it'll likely be higher margin because each unit costs nearly 10 times what an Oculus Quest headset sells for.

For now, the AR headset market is dominated by Microsoft, with Magic Leap's Magic Leap 1 headset making small inroads. But Facebook and Apple (AAPL 1.18%) are rumored to be developing AR headsets as well, so the AR field may become more crowded in the next few years. We don't know what they'll introduce in AR, but given their current markets, it would make sense for them to be in the consumer segment, so Microsoft may have enterprise AR all to itself for the foreseeable future.

AR hardware is an extension of Microsoft's software

If we look at the use cases for HoloLens' augmented reality (which includes architectural design, maintenance repair, and even medical applications), they're really an extension of what customers are doing on their Windows computers. The AR headset is just a tool to visualize what's on the computer in a different way. That's fundamentally different from gaming in VR, and gives Microsoft a great position to provide value to both enterprise users and third-party software developers.

This will likely be fundamentally different from how Magic Leap, Apple, or Facebook views augmented reality. They'll be making stand-alone devices or extensions of a mobile device (like the iPhone). That may allow them to address markets that are different from what HoloLens targets, and it's clear the enterprise market can absorb a much higher price point given the value compared with a consumer device.

Microsoft has a big head start in AR

The big tech companies all have their eyes on VR and AR, but few have found ways to generate a profit or build much market share. Microsoft knows it's going after a relatively small market with the $3,500 HoloLens 2. But that's where AR has value, and it may be able to build a small but profitable business right now. From there, the market can tell Microsoft where there's value, and it can grow from there.