The move should spur growth for the company's Zillow Offers program. Here's what investors need to know.

When Zillow Group (Z 6.05%) (ZG 6.26%) initially announced plans to enter the home-flipping market with its "Instant Offers" pilot program in mid-2017, it was clear the company intended to fundamentally disrupt the traditionally cumbersome homebuying process.

Since renamed "Zillow Offers," the initiative has expanded to 23 large metropolitan markets in 11 states -- most recently adding Los Angeles in December and Tucson, Arizona, last week. Last quarter alone, Zillow fielded a whopping 80,000 Offer requests from its website visitors. And in the process it bought nearly 2,300 homes, sold over 1,200, and ended the period with more than 2,800 homes on its balance sheet.

But if recently announced partnerships are any indication, Zillow is doing all it can to continue accelerating its homebuying efforts. 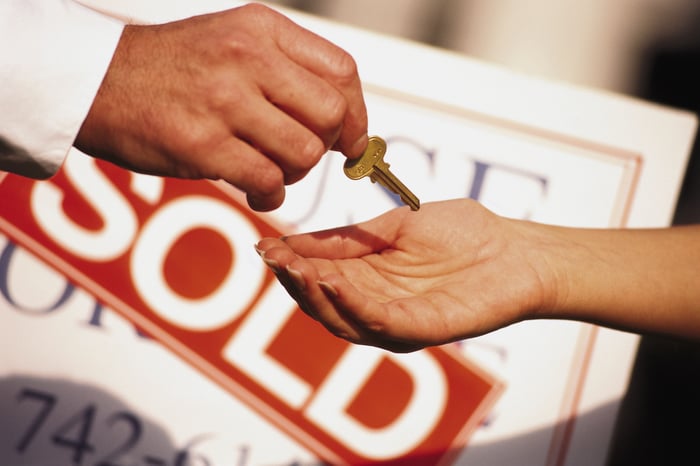 In a press release last week, Zillow Offers unveiled new partnerships with 10 regional homebuilders across Georgia, North Carolina, Texas, Florida, and California. Its aim: to "give home shoppers an easier and more convenient way to move into their dream home."

More specifically, clients building a home with one of Zillow's new partners will be given the opportunity to sell their existing homes "on their own timeline" directly to Zillow through Zillow Offers. To be sure, Zillow Offers also touted flexible closing periods for these buyers of as long as eight months, essentially removing the hassle of timing the sale of their older dwellings via traditional means.

"Not only are these buyers trying to prepare for open houses and align timelines, they can be struggling with the daunting reality of owning two homes at once," elaborated Lucy Wohltman, Zillow VP of new construction. "At its core, Zillow Offers was designed to alleviate these pain points by giving homeowners a quick and efficient way to sell their home in time to purchase their next."

Considering public builders endure average cancellation rates of roughly 16% on new construction -- a figure partly driven by clients' inability to sell their current homes -- the partnerships are also a win for homebuilders who opt to join forces with Zillow Offers.

To be fair, this isn't a novel concept -- Zillow technically unveiled its first slate of 11 homebuilder partners in a separate press release last September. Still, the newest group will significantly widen Zillow's homebuilder prospect funnel. And this should leave Zillow in an even better position to reach its ambitious goal of scaling over the next several years to purchasing an average of 15,000 homes per quarter -- a run rate Zillow expects would generate annualized revenue of around $20 billion for its budding Homes segment alone.

That might sound like an insane growth rate considering Zillow's latest guidance calls for full-year 2019 revenue to arrive right around $2.6 billion. But if Zillow can successfully ramp to those levels while simultaneously leveraging that scale for improved profitability, its stock price should respond in kind.