How a company that disappointed its core audience protected itself anyway.

Activision Blizzard (ATVI -0.28%) is on nearly everyone's Millennial Exposure (ME) list: companies that are focusing on grabbing a piece of the $68 trillion Great Wealth Transfer that's going down for the next three decades or so. (In 2017, we thought it would only be around $24 trillion!)

ME companies are the Walmarts (NYSE: WMT) of the future: the American businesses cementing the brands of future American legend. And more than stateside mainstays Electronic Arts (EA -0.08%) or Take-Two Interactive (TTWO -1.81%), Activision has the household-name American brands (Call of Duty, World of Warcraft, Overwatch, Hearthstone, Diablo, StarCraft) that investors are hanging their hats on in forward-thinking valuations. 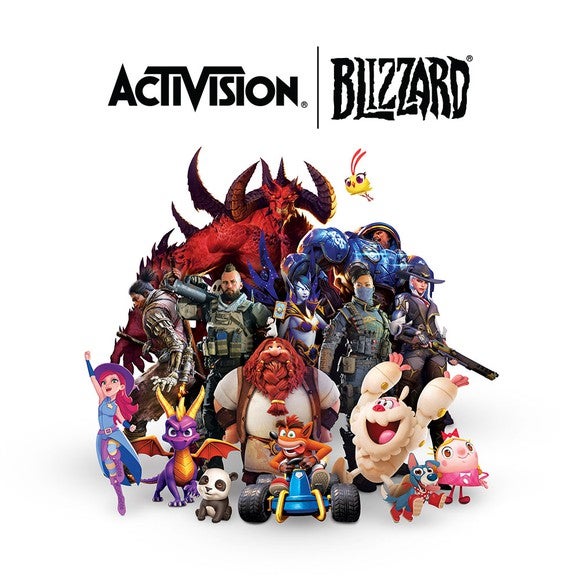 The American gaming industry as a whole took a huge fall from its all-time highs in late 2018. Every major domestic gaming company experienced a six-month low circa March 2019 and has been recovering since then. Currently, Activision sits at a 27.49% loss compared with its Sept. 28, 2018, high of $83.19. The correction might be generally attributed to a generational shift from physical, console-based product to digitally based mobile and social gaming.

Consumers also stopped spending record amounts of money on in-game content, which accounted for 50% of console revenue in 2018. Activision and its American competitors experienced a 2018 holiday sales hiccup, which weighed down 2018 Q4 results across the board and likely correlated highly with the 2019 gaming stock slump.

The companies responded quickly, and the strategy they employed to bounce back has yet to really sink in with their core American audiences. 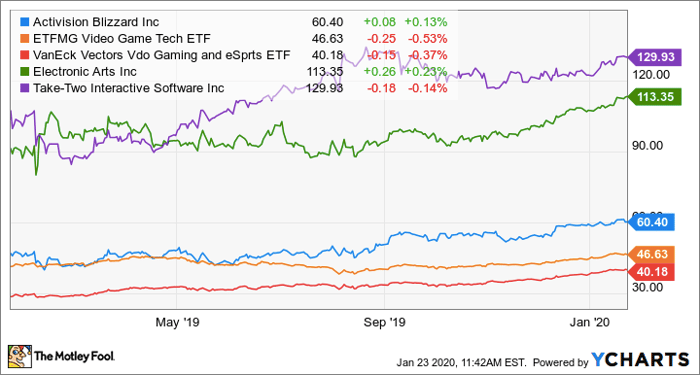 Note in the chart above that when it comes to tracking gaming companies specifically, the VanEck Vectors Video Gaming and eSports ETF is more accurate than the more diversified ETFMG Video Game Tech ETF.

With an internet population just under 4 times that of America, China is now No. 1 in total video game revenue ($36.54 billion versus America's $35.51 billion), although the country imposes strict gameplay curfews on children under 18. Chinese gaming companies have been dangling the carrot of market access over the heads of American companies for quite some time under the radar. The result: considerable Chinese influence over American gaming.

The massive Chinese holding company Tencent owns just under 5% of Activision Blizzard. American gamers found out just how much 5% can be during a dustup a few months ago at the annual BlizzCon festival.

At BlizzCon 2019, Blizzard punished Hong Kong gamer Ng Wai Chung (known as Blitzchung) for using a company-sanctioned stream to speak out in favor of Hong Kong's liberation. He forfeited thousands in prize money and was banned from the following year's tournament.

In America, the response was powerful and immediate, rising to the level of Congress and inspiring a widespread commercial boycott of Activision Blizzard's key titles. Meanwhile, the stock suffered only a 7.82% loss and recovered that loss in a month. Why?

Investors were much more concerned that Activision Blizzard procure the appropriate credentials to continue to distribute Call of Duty: Mobile in China. Activision seemed most concerned with this as well. The company deployed two press releases simultaneously in response to the Blitzchung controversy, one to America and one to China. The American release apologized, reduced the punishment, and guaranteed free speech to BlizzCon players. The Chinese release doubled down on the decision, promising a ban and to "protect [China's] national dignity."

So, yeah, Activision sent two completely different messages out, but the smoke screen was enough for the company to renew its agreement with Chinese distributor NetEase (NTES -0.12%) out to 2023 and help to ensure Call of Duty: Mobile's continued success in China. (Failure might have cost the company billions of dollars in in-game transactions over the next few months.)

Since then, American bloggers have exposed the subterfuge ad infinitum. Every player in the world of gaming knows what Activision did. But if you look at the ticker, you'll see investor sentiment turn positive at about the same point that American consumer sentiment turned negative (circa Nov. 12, 2019).

Can the scale of a company protect it from losing value even as it disappoints its core audience?