Please ensure Javascript is enabled for purposes of website accessibility
Log In Help Join The Motley Fool
Free Article Join Over 1 Million Premium Members And Get More In-Depth Stock Guidance and Research
By Timothy Green - Jan 23, 2020 at 11:40AM

Travelers slumped after missing the mark with its fourth-quarter report, and Intel will try to avoid the same fate this afternoon.

Escalating fears over a viral outbreak in China appear to be putting pressure on stock markets around the world. The Dow Jones Industrial Average (^DJI 2.68%) was down 0.58% at 11:20 a.m. EST, a steeper decline than for the other major U.S. stock indices.

Leading the Dow lower was The Travelers Companies (TRV 4.35%), which reported mixed results that weren't well received by the market. Intel (INTC 3.21%) stock managed to rally despite the broad stock market declines, as the tech giant prepares to report its fourth-quarter results after the market closes.

A mixed report from Travelers

Shares of Travelers were down big on Thursday after the property casualty insurance provider reported its fourth-quarter results. Adjusted earnings per share beat analyst expectations by $0.05, coming in at $3.32, but net earned premium of $7.25 billion missed the mark by $10 million. The stock was down 4.8% in late-morning trading.

While the market didn't react well to Travelers' results, the numbers weren't so bad overall. Net written premiums jumped 6% year over year, driving a 3% rise in revenue. Book value per share soared 17% from the prior-year period, while adjusted book value per share rose a more modest 6%. Catastrophe losses were way down, just $85 million compared to $610 million in the same quarter last year.

Travelers' CEO, Alan Schnitzer, touted the company's strong retention: "In an environment of elevated loss activity and persistently low interest rates, we were once again successful in achieving meaningful improvement in renewal premium change while maintaining high levels of retention."

Along with its fourth-quarter report, Travelers declared a quarterly dividend of $0.82 per share, payable on March 31 to shareholders of record on March 10.

Chip giant Intel finds itself in a complicated situation. The company is having trouble satisfying demand for its chips, thanks to chronic delays getting its 10-nanometer manufacturing process online. At the same time, rival Advanced Micro Devices has launched competitive products with aggressive pricing, forcing Intel to consider widespread price cuts to maintain its dominant market share. 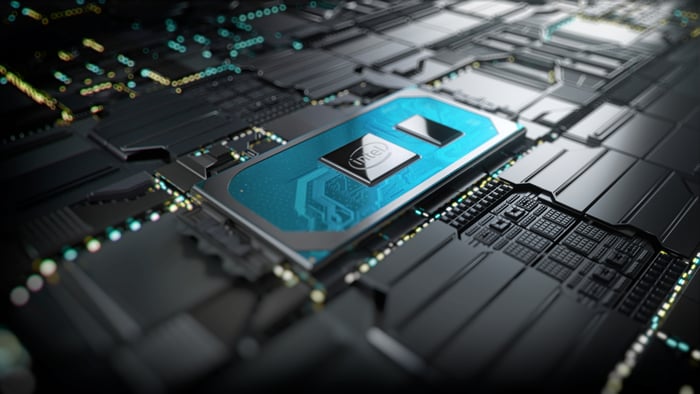 Intel will need to convince investors that it can effectively navigate an increasingly competitive environment when it reports its fourth-quarter results this afternoon. The company expects to report revenue of $19.2 billion and adjusted earnings per share of $1.24, up 2.7% and down 3.1%, respectively, from the fourth quarter of 2018. Shares of Intel were up 0.6% Thursday morning on a down day for the broader market.

Preventing AMD from winning too much market share in both the PC CPU and server CPU markets will almost certainly put pressure on Intel's profitability in 2020 and beyond. Intel has already lowered prices in a few places: Its latest X-series high-end desktop chips came with severe price reductions, and it recently cut the price of some high-memory server chips. More price cutting is likely this year as AMD continues its assault on multiple fronts.

Intel's guidance for 2020, particularly for earnings, has the potential to disappoint. Analysts are expecting a slight rise in adjusted earnings per share this year, but that may be overly optimistic given the circumstances. If Intel's guidance falls short, the stock's ongoing rally could come to an abrupt end.