Please ensure Javascript is enabled for purposes of website accessibility
Log In Help Join The Motley Fool
Free Article Join Over 1 Million Premium Members And Get More In-Depth Stock Guidance and Research
By Mark Prvulovic - Jan 23, 2020 at 9:17AM

There have been some worrying developments for the cancer superdrug, but are they worth losing sleep over?

Merck's (MRK 2.11%) cancer immunology drug, Keytruda, is already one of the best-selling drugs in the world and is well on track to becoming the No. 1 drug by revenue within the next few years. Having already been approved to treat a number of different cancer types, Keytruda is poised to play a crucial role in the company's future sales growth.

Over the past couple of weeks, however, Keytruda has been hit by some mixed, if not outright disappointing, clinical results. Let's take a closer look at some of these developments and whether they should worry pharmaceutical investors. 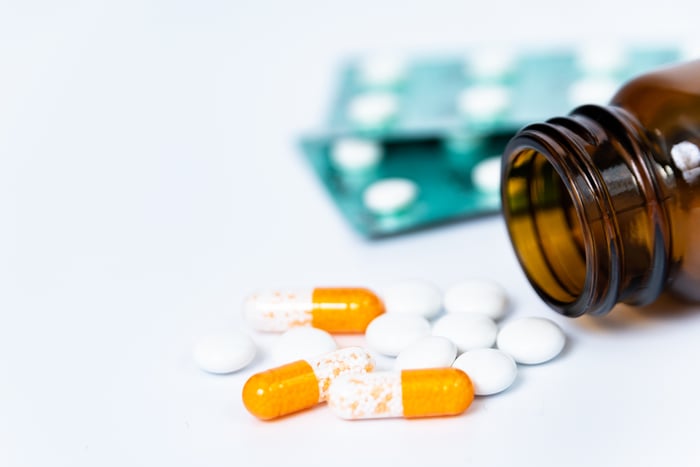 The most notable setback so far in 2020 for the drug involved a phase 3 trial treating small-cell lung cancer (SCLC). Merck announced on Jan. 7 that Keytruda failed to extend the lifespan of patients who are diagnosed with the condition, although it helped slow down cancer progression in combination with chemotherapy.

Keytruda and Opdivo are both PD-1 inhibitors, a type of drug that suppresses PD-1 (programmed cell death 1) proteins in the body, which is responsible for signaling to the immune system to avoid specific cells. The idea is that the body's immune system will turn back on and aggressively target the cells that don't have this protein -- in this instance, cancer cells.

However, drugs that operate in a different manner have had a measure of success in treating SCLC. They include AstraZeneca's Imfiniz and Roche's Tecentriq, both of which target the slightly different PD-L1 pathway. Tecentriq, in particular, has been approved as a first-line treatment for patients with SCLC.

Investors should remember that SCLC accounts for only 10% to 15% of all lung cancer cases, with the vast majority being a type of non-small-cell lung cancer. For this latter category, Keytruda has already received approval from the Food and Drug Administration (FDA) as a treatment, albeit for patients who aren't suitable for surgery or chemoradiation. Even if Keytruda ends up failing to capture the smaller SCLC market and cedes it to other drugmakers, the NSCLC population -- which is represents 85% to 90% of all lung cancer patients -- is a massive market in and off itself. Current estimates predict that the global NSCLC market size will reach $43.7 billion by 2026

However, Keytruda isn't strictly a lung cancer drug; it's approved to treat a variety of other cancers like lymphoma, melanoma, gastric, cervical, and head and neck cancer, whether by itself or in combination with other drugs. When you add all these potential markets together, a setback in the relatively narrow small-cell lung cancer indication becomes even less worrisome.

It's also worth mentioning that Keytruda has a plethora of ongoing studies, and of course not every study is going to yield positive results. A simple search on the internet will reveal a number of clinical flops, most notable of which are a late-stage breast cancer trial that fell apart in May 2019. Another notable failure came from two phase 3 trials concerning Keytruda's effectiveness in treating multiple melanoma, a type of cancer that affects a specific type of white blood cell -- the plasma cells -- found primarily in the bone marrow.

It's to be expected that Keytruda won't hit a clinical home run every time a study comes out. In the big picture, however, things look pretty solid.

What about the potential competition?

Looking at the domestic U.S. market, which accounts for the majority of Keytruda's revenue, Merck faces perhaps the most competition from Roche's Tecentriq. Despite bringing in only one-tenth the gross revenue of Keytruda in 2018, it is seen as the top front-runner behind Merck's cancer drug, holding an edge in clinical results in treating SCLC. While not a short-term threat, Tecentriq poses an increasing "long-term risk" to Keytruda's position, according to Wall Street analysts.

In international markets, such as China, local competitors are popping up that can siphon away market share. Just recently, BeiGene announced strong results for its non-small-cell lung cancer drug, tislelizumab, which, if it receives regulatory approval, would directly compete with Keytruda in China.

Both in the U.S. and internationally, however, it's unlikely that Keytruda's dominance will be shaken up too much in the next year or two. However, within five to 10 years, it's definitely possible that rival drugs could catch up with, or even overtake, Keytruda in terms of market share. Keytruda is also protected from generic competition for several more years, with its patent protection expiring in 2028.

Future Keytruda catalysts to watch for

Keytruda is predicted to reach over $10 billion in annual revenue for 2019, and is well on track to reach peak annual sales of $22.5 billion by 2025. Neither competition nor the occasional clinical setback is likely to do much to change this.

However, there still are some major catalysts for the cancer drug that investors might want to keep an eye on. Most notably, results from a phase 3 trial in the realm of breast cancer is expected to come out in the first quarter while another phase 3 trial for renal cell cancer expected around April.

As for Merck's stock, it trades at a reasonable 25.2 price-to-earnings (P/E) ratio, much lower than AstraZeneca's 63.1 P/E but a bit pricier than Bristol-Myers' 19.4. In some ways, it's surprising that Merck doesn't trade at a higher premium considering Keytruda's revenue projections, but I wouldn't say the stock is underpriced. Overall, I'd say Merck looks like a pretty good buy at the moment, with Keytruda's financial and clinical positions remaining unthreatened for at least the next couple of years.