Please ensure Javascript is enabled for purposes of website accessibility
Log In Help Join The Motley Fool
Free Article Join Over 1 Million Premium Members And Get More In-Depth Stock Guidance and Research
By Adam Levy - Jan 24, 2020 at 8:00AM

TikTok might be able to compete for engagement, but can it win over advertisers?

TikTok, the short-form video app from Chinese company ByteDance, has seen incredible growth over the past year. Snap (SNAP 4.78%) CEO Evan Spiegel thinks it could grow bigger than Instagram, which had over 1 billion monthly active users at last update. He also thinks it's more likely for TikTok to grab engagement from the Facebook (FB 1.29%) subsidiary because the content is simply more interesting.

While TikTok might compete with Instagram for attention, it's more likely to compete with Snap for marketers.

TikTok is testing a self-serve ad platform, and the biggest complaint from marketers so far is a lack of targeting capabilities and measurement data, according to a report by Digiday. That makes it a better replacement for the broadly focused advertisements on Snapchat compared to highly targeted ads seen on Instagram or Facebook. 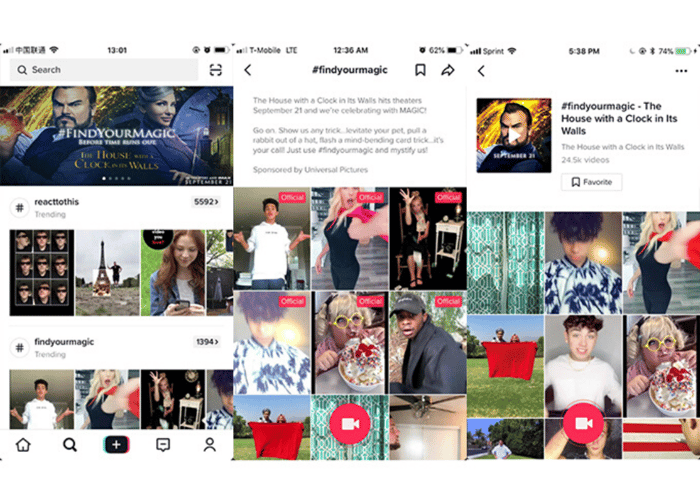 An example of a sponsored hashtag ad on TikTok from Universal Pictures. Image source: TikTok.

The most important metric for advertisers

At the end of the day, marketers don't care how many sets of unique eyeballs saw their ads, or how many times they saw them either. They just care what kind of return they get on the money they spend on ads.

Marketers have gotten very good at getting the most out of Facebook's ad inventory and the targeting capabilities it offers. As a result of its broad user base and deep levels of data on its users, marketers get high returns on their ad spend. And they correspondingly spend a lot on each ad. Facebook has been able to keep average ad prices relatively stable despite ramping up ads in Stories, which both Facebook and marketers are still trying to figure out how to make more effective.

Facebook's ad prices are largely supported by the long-tail of marketers that can get the most out of Facebook's targeting capabilities. At last count, the company had over 7 million active advertisers, 3 million of which were advertising on Stories. Combined, they produce enough demand to drive comparable ad prices higher every quarter.

Snap, by comparison, collects very little data on its users and gives marketers limited targeting capabilities. It's struggled to grow its active advertiser base beyond the big brand advertisers at the top of the market. Snap's management points out that its advertising revenue growth is being fueled by a move to "always-on" advertising, that is, existing advertisers spending more and spending year-round.

TikTok's self-serve ad platform looks and behaves a lot more like Snapchat than Instagram or Facebook. That'll make it a challenge for Snap to keep growing ad spend per advertiser as TikTok ramps up its advertising efforts.

What about the effect on engagement?

Instagram isn't completely immune to the threat of TikTok, though. Management has already said it's reached a saturation point in the number of ads its users see in the Instagram feed. And if engagement shifts from Instagram to TikTok, it would see its ad inventory drop as a result.

Interestingly, Facebook has seen engagement remain relatively stable, even climb higher, in its legacy feed products despite the growth of its own Stories products, Snapchat, TikTok, and various other mobile apps over the past year. Facebook isn't just competing with other social media apps for time spent, it's competing with general entertainment.

Notably, nobody is talking about the continued growth of YouTube, and its potential to negatively affect engagement on Instagram. Nor do investors discuss how Disney+ could take time away from Facebook.

Time spent on mobile keeps climbing. Americans spent nine more minutes per day on their smartphones in 2019 on average, and that number should keep climbing into the future, according to estimates from eMarketer. The biggest loser, meanwhile, has been television.

That secular trend will enable Facebook's competitors to grow engagement without producing a huge negative effect on the amount of time people spend on Facebook's properties. The potential for an alternative source of ad inventory from up-and-coming tech companies like TikTok is a considerable threat, however, as marketers look to maximize the value of their ad spend. But considering TikTok's limited targeting abilities and lagging measurement metrics, it's a bigger threat to Snap's ability to keep growing revenue than Facebook's.