Please ensure Javascript is enabled for purposes of website accessibility
Log In Help Join The Motley Fool
Free Article Join Over 1 Million Premium Members And Get More In-Depth Stock Guidance and Research
By Eric Volkman - Jan 24, 2020 at 10:18AM

Cannabis sold under license costs nearly twice as much as product from illegal sources.

On Thursday, Statistics Canada issued its latest quarterly update about the development of that country's cannabis market, and one key set of figures in that report merits a closer look from investors.

On the retail pricing front, the gap between the average selling price of licensed cannabis and that of the illicit variety has widened, increasing the attractiveness of the latter.

In Q4, the price of a gram of legal marijuana rose slightly on a quarter-over-quarter basis to 10.30 Canadian dollars ($7.83), while illegal product cost an average of CA$5.73 ($4.36) per gram. The CA$4.57 ($3.47) gap between the two is the second-widest it has been since the law legalizing recreational cannabis in Canada first came into effect in late 2018. 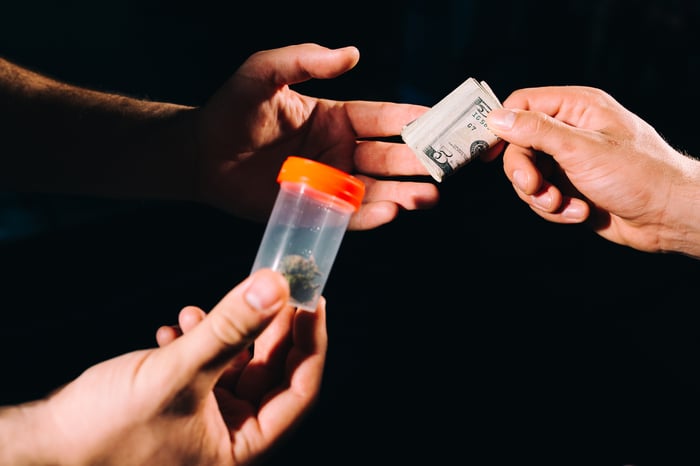 Over the past five quarters, there has been a notable difference in the trends of those prices. From Q4 2018 to Q4 2019, the average selling price for licensed product grew by more than 6%. That for illegally produced weed declined by 11%.

The price difference has been caused in no small degree by the slow pace at which governments are awarding retail licenses to would-be cannabis sellers in certain areas of the country (such as Ontario). A somewhat aggressive tax rate on legal cannabis only adds to the list of challenges for legitimate producers and sellers.

These factors have contributed to revenue declines for even the biggest Canadian cannabis companies, such as industry bellwethers Aurora Cannabis (ACB 1.87%) and Canopy Growth (CGC 10.34%). In their most recently reported quarters, Aurora suffered a 24% quarter-over-quarter decrease in net revenue, while Canopy Growth's top line slumped by 15%.

On Thursday, shares of Aurora Cannabis closed 1.5% higher, while shares of Canopy Growth rose by almost 1.9%.