Please ensure Javascript is enabled for purposes of website accessibility
Log In Help Join The Motley Fool
Free Article Join Over 1 Million Premium Members And Get More In-Depth Stock Guidance and Research
By David Haen - Jan 24, 2020 at 8:00AM

With its first FDA approval in hand, a second, more lucrative indication looms on the horizon.

Ardelyx (ARDX 1.60%) has hit its stride, and investors should take advantage of the opportunity. Last fall, the Food and Drug Administration  approved the company's first drug.

Shortly thereafter, the same drug successfully achieved the endpoints in a late-stage pivotal trial for a different, albeit larger patient population. The company plans to submit the results to the FDA in mid-2020 and hopes to gain approval in 2021. 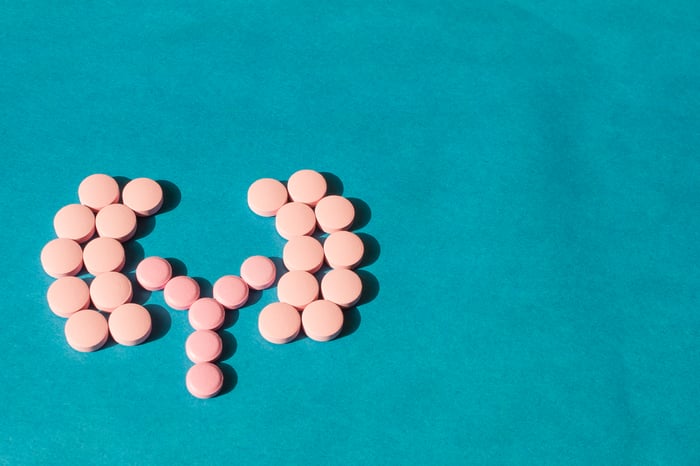 FDA-approved but not launched

In September, the FDA approved Ardelyx's drug Ibsrela for the treatment of adults with irritable bowel disease with constipation (IBS-C). Ibsrela, a pill taken twice a day, works via a different mechanism than other approved drugs. Ardelyx's CEO Mike Raab described IBS-C as a "highly burdensome and difficult-to-treat condition affecting more than 11 million people in the United States."

Ardelyx, recognizing the challenges of selling a drug for a big market like IBS-C, decided it will seek a commercial partner rather than try to bring the drug to market itself. This will allow the company to keep its focus squarely on advancing Ibsrela as a treatment for another potential lucrative disease.

A more attractive opportunity ahead

Beyond IBS-C, Ardelyx developed Ibsrela as a treatment for hyperphosphatemia, a condition marked by increased phosphorous levels in the body. These levels serve as an independent predictor of morbidity and mortality for dialysis patients. Roughly 85% of dialysis patients require treatment to lower their phosphate levels.

According to the company, the prescription phosphate binding market exceeds $1 billion propelled by more than half a million dialysis patients. Ardelyx believes its different mechanism from other phosphate binders and greater convenience (one small pill twice a day versus three or more pills three times daily) will make it a preferred treatment option. The company has begun gearing up and plans to sell Ibsrela (probably under a different name) itself, assuming it gets approved to treat hyperphosphatemia.

To back this up, Ardelyx completed three phase 3 clinical trials demonstrating the ability of Ibsrela to lower phosphate levels. The Phreedom trial, aimed at evaluating the long-term use of the drug, treated patients on dialysis with chronic kidney disease for 52 weeks. In December, the company released top-line results showing Ibsrela met the primary and secondary endpoints.

The main blemish for the drug is that 52% of patients reported diarrhea, with the majority being mild or moderate in severity. Let's not forget the initial approval is for treating constipation in IBS patients. The company claims this dissipates over time. It will be interesting to see how patients and doctors address this in real-world experience.

Will a partner emerge?

Unfortunately, no partnership to market Ibsrela in the U.S. has been announced yet. That means Ibsrela has lost at least one-quarter of sales, with more in sight. Striking a partnership deal could provide a sizable multi-million-dollar up-front payment plus future royalties, which could bolster the stock.

Perhaps, something else is going on here. What if Ardelyx does not really want to launch Ibsrela for IBS-C because of the drug's potential in hyperphosphatemia? Let's unpack this further.

In the IBS-C market, Ibsrela faces competitors such as Linzess by Allergan and Ironwood Pharmaceuticals and Trulance by Bausch Health. A supply of 30 capsules or tablets of either drug runs about $500, according to GoodRx. That means Ibsrela will likely need to be priced similarly to be competitive.

Launching at that price effectively caps what Ardelyx can charge for the pills in hyperphosphatemia. Both IBS-C and hyperphosphatemia patients take one pill twice a day. Competitive drugs for hyperphosphatemia, such as Velphoro from Vifor Pharma, can cost between $1,400 to $1,600 for a 30-day supply. Ardelyx stands to make three times as much per pill if it gets pricing in that range compared to the IBS-C. While some may question the ethics around this, it is a savvy business move that should ultimately benefit the company's shareholders.

Ardelyx announced that it intends to file a New Drug Application with the FDA for treating hyperphosphatemia in mid-2020. It expects a final decision on approval in 2021. Until then, what can investors look for? First, the company plans to present detailed results from the recent trials at major medical conferences. That will drive awareness and potentially boost the stock price. Second, maybe the company forges a collaboration to sell Ibsrela for IBS-C, maybe not.

Third, the company does not need to raise money. Ardelyx raised $125 million in capital in December. On Jan. 13, the company filed a Form 8-K that said it had $247.5 million in cash as of Dec. 31, 2019, which is enough to fund operations until early 2022. Investors likely will not face a dilutive round of financing this year that would likely lower the stock price.

Biotech investors will likely see the stock start to ramp up as more data is presented at medical conferences and as the FDA's approval deadline approaches. Investors may even get an early surprise with a buyout offer from a big pharma company. A single product addressing two large markets like Ibsrela may benefit from the breadth of capability of a big pharma partner. And maybe that's what Ardelyx's management secretly wants after all.