Friday was a volatile day for the Dow Jones Industrial Average (^DJI -0.75%). Up early in the morning, the Dow was down 0.32% by noon EST. The outbreak of a virus in China could be weighing on the index as the disease spreads.

Charting its own path on Friday was Intel (INTC -0.80%), which rose sharply after handily beating analyst expectations with its fourth-quarter report. Apple (AAPL -2.46%) was also up after two analysts boosted their price targets.

Intel has managed to fend off rival Advanced Micro Devices, at least for now. Despite AMD launching competitive products across the desktop, laptop, and server chip markets, pressuring Intel on price, the chip giant was still able to impress investors with its fourth-quarter report. 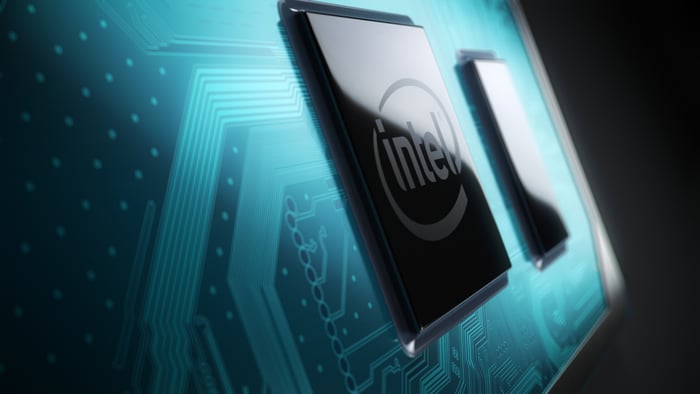 Fourth-quarter revenue was $20.2 billion, up 8% from the prior-year period. Adjusted earnings per share were $1.52, up 19%. Both numbers easily beat analyst expectations.

The PC business managed to grow revenue by 2%, although notebook volumes and desktop pricing were down on a year-over-year basis. The data center group was the star of the show, with 19% growth fueled by surging demand from cloud computing providers. Sales to cloud service providers were up 48% in the quarter, pushing unit volumes up 12% and average selling prices up 5%.

Intel plans to add additional wafer capacity in 2020 to meet growing demand for its PC chips. The company has been struggling to produce enough chips, and AMD's resurgence isn't helping matters. For 2020, Intel expects to produce revenue of $73.5 billion and non-GAAP (adjusted) EPS of $5.00, up 2.1% and 2.7%, respectively, from 2019.

Intel stock was up 9% by lunchtime Friday. Shares of the tech giant are now up around 44% over the past year.

Wedbush analyst Dan Ives now sees Apple stock rising to $400, up from a previous target of $350. Ives believes the market is underestimating the potential for an iPhone upgrade cycle driven by 5G-enabled phones. He is also impressed with demand for Apple's AirPods and expects the company to beat expectations when it reports its quarterly results on Jan. 28.

Rosenblatt analyst Jun Zhang is less optimistic, raising his price target from $150 to $250. Zhang admits that AirPod demand is strong, but he's worried that the market is actually too optimistic about the 5G upgrade cycle. He also has concerns about the base iPhone 11 and a new low-cost iPhone lowering average selling prices.

The Journal report on Apple TV+ exceeding 33 million U.S. subscribers doesn't necessarily mean much, since a free subscription comes with new Apple devices. The real test will be whether those subscribers renew when their free trial is up.

With Apple's earnings report coming next week, investors won't have to wait long to see if these higher price targets are justified.