Please ensure Javascript is enabled for purposes of website accessibility
Log In Help Join The Motley Fool
Free Article Join Over 1 Million Premium Members And Get More In-Depth Stock Guidance and Research
By Jennifer Saibil - Updated Jan 24, 2020 at 9:05AM

Both of these companies have seen major growth in international markets, and this forward-thinking approach gives them a boost as the marketplace becomes global.

I'm writing this as I sit in a Starbucks (SBUX -0.55%) cafe at Charles De Gaulle Airport in Paris, and while the language is different, the experience is very much the same.  Many of the high-end luxury shops are understandably quiet, but Starbucks is hopping. It seems like everyone knows that here, you'll get a quality cup of coffee in a relaxed environment and a table for your laptop.

This idea of getting a consistently quality product, no matter where one is in the world, seems to translate across countries and cultures.  Many large U.S. companies, such as Nike (NKE -2.13%) are catching on. By focusing on a wider global audience, these companies stand to benefit from new opportunities and strengthened revenue streams in the decade ahead. 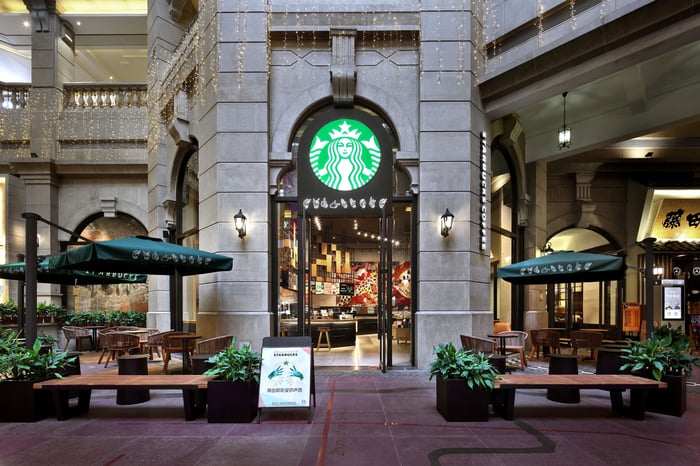 Starbucks has a vision

The main driver of Starbucks revenue is domestic sales, which accounted for 69% of the total revenue in the 2019 fourth quarter. However, notwithstanding positive comps and cash flow from domestic operations, growth is coming from international locations, and Starbucks is cultivating these markets that are slowly catching up.

Starbucks is now in over 80 global markets, and the fourth quarter of 2019 saw a 3% increase in international comps, up from a 1% increase in 2018. Overall, revenue was up 6% year-over-year.

The company has done a thorough analysis of the issues involved in international operations, including higher development costs and risks related to varying cultural norms. But it helps that most of us drink coffee, which makes for a more seamless international transition.

Why has Starbucks been so successful worldwide? The same reasons it's seen so much success in the U.S.: a commitment to the customer experience, which matters everywhere, and strong technological innovation, which gives it the power to manage international growth.

In many ways, Nike is hard to beat, too. Its image as a technological front-runner and high status symbol gives it an edge in sales, and no other athletic shoe company can quite match it in terms of revenue and innovation. The second quarter of 2020 saw $10.3 billion in revenue and 10% growth, crushing numbers for its closest rival, Adidas (ADDYY 0.46%), which saw $7.1 billion and 6% growth in its most recent quarterly report.

The greater share of the gain came from international markets, specifically in China, as these areas have been fueling the company's growth over the past year:

Not only are these numbers fantastic, they're also remarkably consistent, which is important for investors to consider when evaluating a company's longer-term sustainability.

The company released the Nike app in China this past quarter, and it was downloaded 1 million times on the day of the launch, making it the top shopping app in all of China. Nike monitors that region thoroughly to find opportunities for community engagement, and the result has been explosive growth.

Nike plans to achieve greater worldwide dominance through its premium and exclusive products that appeal to a mass audience of fans internationally. Former CEO Phil Knight said in his book Shoe Dog, "Business is war without bullets," and Nike knows that to keep its top spot, it can't let up on the offensive.

With the rise of digital sales, having an international presence and strategy has become all the more important. Starbucks and Nike are ahead of the pack, which goes a long way toward ensuring long-term growth.

Going global is not a simple task for any company. It requires stability and a core business back at home before any company can grow beyond its borders, and enough brand recognition that it can have the confidence that it will take hold outside of its home country.

Both of these companies have seen rising share price, with Starbucks up 46% and Nike up 32% over one year, and there's good reason to believe that they will continue in that direction.