Major trends in the United States could power the growth for these stocks for years to come.

Home Depot (HD 1.18%) reaffirmed its fiscal 2019 earnings outlook last November, even though full-year revenue and comparable-sales growth of 1.8% and 3.5%, respectively, came in lower than previous guidance from management. Shares have only recently recovered to preannouncement levels, but I have a hunch that the company and the overall industry are in a strong position in 2020 and beyond.

Here's why now is the time to nail down -- pun intended -- a position in the home improvement sector. 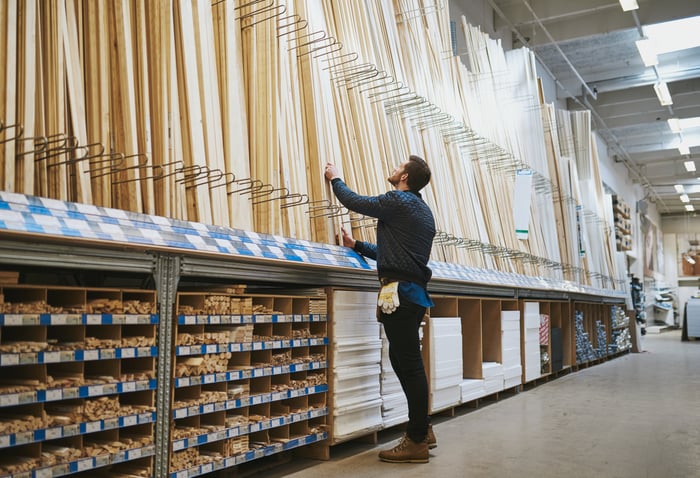 The Census Bureau projected in 2015 that the U.S. population will hit 400 million in 2051 and expand to 417 million by 2060. Based on those projections, demand for items such as lumber, electrical and plumbing supplies, and other housing and construction materials should enjoy strong demand.

Then there's a Harvard study that shows a healthy progression of the home remodeling market, from $277 billion in 2010 to $424 billion in 2017. The same report also indicates that "with new construction still slow to recover from historic lows, almost 80% of the nation's 137 million homes are now at least 20 years old, and 40% are at least 50 years old."

There's no guarantee these trends will become tailwinds for the home improvement industry, but management at the likes of Home Depot and Lowe's (LOW 0.50%) are no doubt excited about the potential for their businesses.

So which companies deserve a look?

If I had to choose between Home Depot and Lowe's, I'd go with Lowe's. Though revenue in the third quarter was roughly flat with the prior-year period at $17.4 billion, comparable sales saw a 2.2% gain. For the first three quarters of 2019, earnings rose 25% year over year to $4.80 per share. The company is expected to continue growing at a healthy pace, with double-digit earnings growth in 2019, 2020, and 2021. Not bad for a brick-and-mortar retail chain.

Nor should it be overlooked that Lowe's has been consistently returning capital to shareholders. According to its third-quarter earnings release, "the company repurchased $835 million of stock under its share repurchase program and paid $428 million in dividends." The stock yields 1.8% as of this writing.

So what about Home Depot? The company has earned its title as the leader of this space with a storied operating history and deep product selection. It has also excelled in serving its "Pro" market, as this niche of industry professionals is among Home Depot's biggest and fastest-growing area of customers.

But analysts don't expect Home Depot to see earnings grow at quite the same pace as its rival, and though it also sports a healthy 2.4% dividend, valuation is the sticking point. Home Depot trades at 21.5 times forward earnings estimates, while Lowe's has a lower multiple of 18.5 and a stronger growth trajectory over the next several years.

A third name to consider

Sherwin-Williams (SHW 0.68%) is another name I'm keeping an eye on. I'm a fan of its paints and in-store customer service, not to mention its ability to thrive despite stiff competition from the home improvement heavyweights.

The company has healthy solid cash generation, which has similarly given it the flexibility to reward shareholders. In fact, as CEO John Morikis said during the most recent earnings call, "Year to date, we returned over $892 million to shareholders through cash dividends and share repurchases, an increase of 46% year over year."

On a pullback, I think Sherwin-Williams could be worth considering. With analysts forecasting several more years of double-digit earnings growth and a 0.8% dividend yield, the main thing holding me back is price. The stock commands the richest valuation of the three companies, with a forward price-to-earnings multiple of more than 25.

Regardless of which one you pick from this home improvement trio, I'm left with the feeling that each company is well positioned to take advantage of the long-term benefits of a growing population and aging housing market across the country. Any pullback among these stocks would only sweeten the situation.