Please ensure Javascript is enabled for purposes of website accessibility
Log In Help Join The Motley Fool
Free Article Join Over 1 Million Premium Members And Get More In-Depth Stock Guidance and Research
By Donna Fuscaldo - Jan 24, 2020 at 9:25AM

Companies' shares (and bottom lines) should get a lift from the environmental efforts of these tech giants.

Recently, Amazon (AMZN 0.73%), Apple (AAPL 0.96%), and Microsoft (MSFT 1.28%) have all vowed to lower their greenhouse emissions, pledging to be carbon-negative in the decades to come.

Those announcements have been well-received by consumers, lawmakers, and climate activists alike. But it's not only the environment, and humanity, that stands to benefit. Investors in these tech companies are also seeing stocks get a lift from their environment-saving initiatives.

Let's take Microsoft -- the latest to announce a new green plan -- for starters.

Last week, the software giant announced that by 2030 it will be carbon-negative, and by 2050 it will remove all the carbon it's emitted since its founding in 1975. Microsoft also announced a technology initiative to help suppliers and customers reduce their carbon footprints, and a $1 billion climate innovation fund to speed up the development of technologies to reduce, capture, and remove carbon. 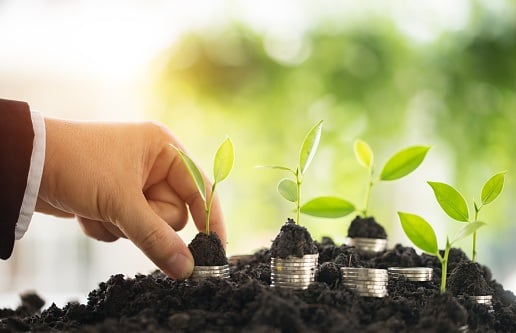 "Reducing carbon is where the world needs to go, and we recognize that it's what our customers and employees are asking us to pursue. This is a bold bet -- a moonshot -- for Microsoft. And it will need to become a moonshot for the world," Microsoft wrote. "It won't be easy for Microsoft to become carbon negative by 2030. But we believe it's the right goal. And with the right commitment, it's an achievable goal."

Not only did the company make the world feel a little bit safer, but investors got a little bit richer: Shares increased 2% the day after its green announcement, setting a new all-time high. That's since been surpassed, as Microsoft's stock continues to climb in 2020. While there's a lot to like about Microsoft beyond becoming carbon-negative by 2030, investors have been rewarding companies that are taking the initiatives to save the planet. They recognize a rapidly warming planet can lead to conditions that could hurt a company's bottom line.

Investors are increasingly focused on sustainability

That's the reasoning behind the decision by BlackRock (BLK -0.96%), the world's largest asset management firm, to exit investments that present a "high sustainability-related risk." Climate change "is almost invariably the top issue that clients around the world raise with BlackRock. From Europe to Australia, South America to China, Florida to Oregon, investors are asking how they should modify their portfolios," wrote the firm's CEO Larry Fink in a letter to other CEOs. "They are seeking to understand both the physical risks associated with climate change as well as the ways that climate policy will impact prices, costs, and demand across the entire economy."

Microsoft is among a growing number of companies that are taking on what was traditionally the role of government in the fight against climate change. With President Donald Trump paying little attention to global warming as he helps prop up fossil-fuel industries, companies are carrying the mantle and seeing their stocks rise along with their efforts. It doesn't hurt that Microsoft wants to play a major role in creating the technologies that will combat climate change. If those technologies are used by suppliers and businesses around the world, it's another revenue stream for the software giant.

In a recent interview discussing the company's green efforts, Microsoft CFO Amy Hood said its programs, as well as a $750 million investment to create cheap housing in Microsoft's hometown of Seattle, will generate good returns. She wouldn't say when the returns will be realized, but the writing is on the wall: Microsoft intends to make money off its green efforts.

Amazon is also all-in with the green movement, announcing in the fall that it will achieve net-zero carbon emissions by 2040. Its plan includes buying 100,000 electric delivery trucks and reaching 100% renewable energy in 2030. By throwing its might behind greener operations, the company doesn't only stand to save a lot of money on operations -- it will also calm constituents, including customers who are angry about all the environmental waste Amazon produces.

Consumers are well aware that every year fossil-fuel-burning planes, trucks, and vans deliver billions of Amazon's products to customers around the world. The company's green initiatives can also build goodwill with its employees, who have grown vocal about their disdain. All of this bodes well for Amazon's stock.

Apple, too, has many reasons to pursue a greener way of operating, outside of its corporate responsibility. The iPhone maker has vowed to someday produce all of its products with 100% renewable energy and to make new products without mining any materials from the earth. By shifting to renewable energy, Apple will save a lot of money. The business of making electronic gadgets, and streaming services like games and movies, take up a lot of energy; the less the company pays for energy, the more money falls to the bottom line. According to Apple, since 2008, it's reduced the average energy needed to make its products by 70%.

Green initiatives alone may not send shares of Apple, Amazon, and Microsoft up by double digits -- but with investors increasingly focused on sustainability and with proposed initiatives poised to take costs out of operations, they will help. All three stocks got an initial lift from their companies' announcements. As more investors care about sustainability, these companies are poised to benefit from their push toward a greener planet.