Please ensure Javascript is enabled for purposes of website accessibility
Log In Help Join The Motley Fool
Free Article Join Over 1 Million Premium Members And Get More In-Depth Stock Guidance and Research
By Rich Duprey - Jan 25, 2020 at 11:29AM

But it likely wouldn't happen soon.

Philip Morris CEO Andre Calantzopoulos said the two companies were better off concentrating solely on distributing Philip Morris' IQOS heated tobacco device. It is the only e-cig to receive FDA marketing approval, and Altria has the rights to market, distribute, and sell the device in the U.S. "After much deliberation, the companies have agreed to focus on launching IQOS in the U.S. as part of their mutual interest to achieve a smoke-free future,” Calantzopoulos was quoted as saying in a press release.

But Bloomberg earlier this week reported that the two might not have totally written off the idea of a union. At a gathering of global political and business leaders in Davos, Switzerland, Philip Morris COO Jacek Olczak reportedly said in answer to a question about whether Philip Morris would revisit the idea of merger, "the chapter is closed, but not the book." 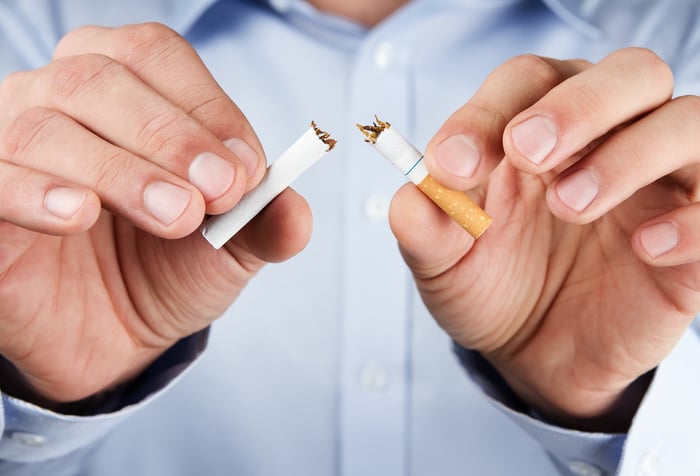 It's not likely investors will see any action right away, however, as Altria is still trying to untangle regulatory umbrage over its $12.8 billion investment in Juul.

More than a year after taking a 35% stake in the e-cig maker, the Federal Trade Commission still has not signed off on the deal. Adding to the probes already underway over the investment and the way that Juul has marketed its devices to teens, there's also concern over what, if any, influence Altria exerted in the resignation of Juul's CEO and having one of its own former executives inserted in his place.

The Wall Street Journal recently reported that the FTC is still investigating antitrust issues stemming from the transaction, looking closely at retail shelf space Altria acquired for e-cigs despite winding down its own MarkTen e-cig business. That shelf space was subsequently given to Juul.

Other opportunities are on the horizon

Yet Philip Morris apparently still sees the value of joining the two companies together. Because Altria and Philip Morris International were once one company, and the Marlboro brand is common to both -- Altria sells it in the U.S., Philip Morris sells it to the rest of the world -- there would indeed be efficiencies that could be realized.

Calantzopoulos told Bloomberg he sees consolidation in the e-cig industry's future, and that is undoubtedly true as the FDA's deadline for electronic cigarette companies to submit pre-market tobacco product applications is fast approaching and few e-cig manufacturers will be able to meet the high hurdle the FDA has set by themselves. So far, only Philip Morris and British American Tobacco have had the resources to file their applications, and have done so at great expense. For those companies unable to comply, their products will be pulled from the market, giving the biggest players a chance to scoop them up at significant discounts.

Calantzopoulos says Philip Morris wants to be the e-cig leader with its IQOS device, and is getting ready to launch a new version called IQOS Mesh. The device uses a metallic mesh to heat a pre-filled, pre-sealed "cap" containing an e-liquid. Called VEEV, the caps contain nicotine, flavors, and a heater.

Because they're all self-contained and produced by Philip Morris, they solve the problem of third parties concocting e-liquids that may contain harmful additives. The CDC says an outbreak last summer that saw thousands of vapers injured and dozens killed from lung injuries is likely linked to "tetrahydrocannabinol (THC)-containing e-cigarette, or vaping, products, particularly from informal sources like friends, family, or in-person or online dealers." So a closed system has benefits.

Although keeping Altria and Philip Morris separate made sense for a lot of investors, as it gave them the choice of whether they wanted to be exposed to the litigious U.S. tobacco market, there are good arguments to be made for joining them together again.