As a consumer, you won't notice much difference between their payment networks. But you may see some differences between them as an investor.

If you can find a company with a toll-road-like business model, major potential for growth, and characteristics that cushion it from both inflation and macroeconomic downturns, well, that could be a dreamy business to invest in.

Allow me to present Visa and Mastercard.

They operate the two largest payments networks outside of China -- the backbone infrastructure through which card-based transactions take place. Their technology performs the authorization, clearance, and settlement functions of transactions between the banks that issue credit cards and the banks of the merchants that accept them.

Their two primary rivals are American Express (NYSE: AXP) and Discover (NYSE: DFS), but these smaller competitors also make money from issuing cards and lending. Visa and Mastercard, by contrast, are "pure plays" in the lower-risk payments processing space, in which operators take a small percentage of every transaction processed over their networks. Visa and Mastercard also have wider global acceptance than the other two, giving each larger economies of scale and high margins.

In recent years, both Visa and Mastercard have greatly expanded their acceptance, international reach, and technological capabilities, cementing their leading positions in this four-company oligopoly.  But you were going to invest in just one of these two stocks today, which one should it be? 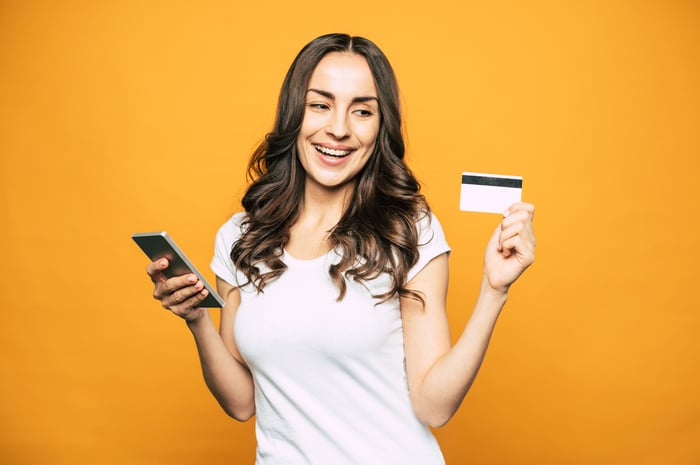 Though they have very similar capabilities and take rates, they do differ significantly in scale: Visa is currently almost twice the size of Mastercard on a payment volume basis. While that affords Visa higher margins, it also means that Mastercard has more potential to grow.

Looking at their stats side-by-side gives one a sense of how similar they are. Mastercard is nearly half the size of Visa, but it's growing faster. In fact, Mastercard's transaction growth was 14.4% last quarter, while Visa's was only 6.6% on a constant-currency basis. However, Visa appears to be doing a better job of monetizing its traffic and garnering revenue from other data-processing services, which is why it has higher revenue per transaction and higher margins.

As you can see below, neither company's shares are cheap right now, with both sporting very high P/E ratios. However, the market appears to be giving Mastercard more credit for its faster transaction growth rate and its potential to outpace Visa in the years ahead. Mastercard's P/E ratio is an extremely high 48.2 compared to Visa's P/E of 38.8. 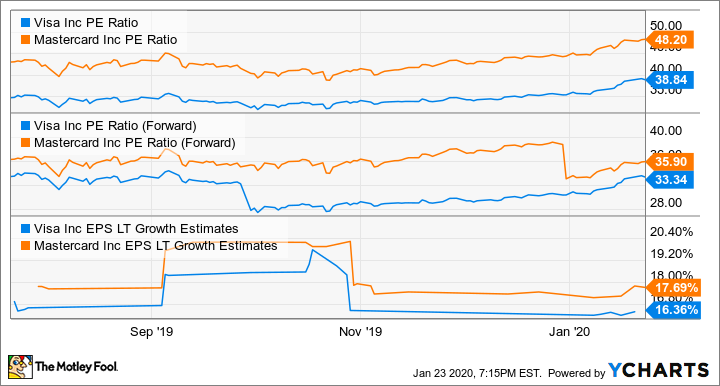 Thus, the market appears to be appropriately factoring Mastercard's better growth profile into its valuation. This makes the decision between the two companies more difficult.

Peering into the crystal ball

Looking ahead, investors may want to pay attention to how each company fares in their new, non-retail growth businesses, such as business-to-business payments, person-to-person payments, and international remittances. Visa just made a big splash with its $5.3 billion purchase of Plaid, a start-up that powers the movement of money across up-and-coming fintech apps such as Venmo. For its part, Mastercard made a slew of acquisitions in 2019 alone across data analytics, fraud detection, point-of-sale financing, and cross-border payments.

In the end, both of these stocks appear to be fine options for investors who want to profit from the war on cash. Both have solid, entrenched positions that will benefit from the increasing number of credit, debit, and digital purchases being made worldwide, and both are also expanding into analytics and other payments-related businesses. Mastercard may have greater appeal for growth investors due to its smaller size and higher growth rate, while more defensive investors may prefer Visa due to its larger size, higher margins, and lower valuation.

But quite honestly, I think it's a coin flip between them given each company's risk-return profile. Fortunately, as an investor, you can just buy both stocks in equal amounts in order to play the strong secular trends in card and digital payments, which saves you from having to worry about whether you've chosen the right one.