Please ensure Javascript is enabled for purposes of website accessibility
Log In Help Join The Motley Fool
Free Article Join Over 1 Million Premium Members And Get More In-Depth Stock Guidance and Research
By John Ballard - Jan 25, 2020 at 10:30AM

Disney+ may reach more subscribers than anyone expects over the next decade.

Shares of Walt Disney (DIS -4.01%) are up over 20% since the company announced its Disney+ service in April last year. Analysts who attended the unveiling of the service were reportedly very impressed with the presentation.

Closer to launch, it became clear that The Mandalorian would serve as the service's marquee show, but no one could have foreseen the success the show has had over the holiday quarter, thanks to management's decision to keep one of the main characters of the show -- The Child (also called "Baby Yoda") -- top secret.

One analyst from Bank of America believes Disney's projection of 60 million to 90 million subscribers for Disney+ by fiscal 2024 is too low. A survey revealed that nearly a third of Disney+ subscribers dropped another service after it launched in November, with 9% responding that they unsubscribed from Netflix (NFLX -3.79%).

Netflix just reported lower-than-expected net additions for the U.S. in its fourth-quarter earnings report, a sign that the launch of Disney+ and other new services did have an impact on its results. Based on positive trends in awareness and penetration, the Bank of America analyst believes Disney probably reached 25 million subscribers in its fiscal first quarter, which ended in December.

The success of Disney+ is crucial to the growth of the company. It was inevitable that it would invest in a digital streaming platform at some point, especially after its acquisition of BAMTech in 2017. But Bob Iger, who is stepping down in 2021 after serving as CEO since 2005, is leaving his mark by going all-in on direct-to-consumer services.

This will involve substantial cost for investing in content, but with approximately one billion people around the world claiming to be fans of Disney's many franchises, the launch of Disney+ has greatly extended the company's growth runway.

The Mandalorian cost Disney about $100 million, or $15 million per episode, which is up there with HBO's Game of Thrones as one of the most expensive shows in history.

It's going to get a lot more expensive for Disney, which needs quality content on its service to add subscribers. There are reports that Disney will spend up to $25 million per episode for some original Marvel shows.

In total, the company plans to spend $1 billion on content this year. Management has guided for that budget to increase to around $2.5 billion by fiscal 2024 when Disney expects the service to generate a profit.

One reason Disney's subscriber outlook may be too conservative is that there are likely going to be more shows like The Mandalorian that create tremendous buzz with audiences.

Here's why that matters. One of the upcoming Marvel shows being released this year is The Falcon and the Winter Soldier. Just as The Mandalorian drops some interesting morsels for fans of Star Wars to dig into, The Falcon and the Winter Soldier does something similar by following the events of the box office hit, Marvel's Avengers: Endgame (2019).

Disney is producing many of these shows to tie into its movie releases. Marvel's creative director, Kevin Feige, told Bloomberg Businessweek that "events from the new shows will factor into forthcoming films such as Doctor Strange in the Multiverse of Madness," which is expected to be released in 2021.

What this means is that Marvel fans will have to subscribe to Disney+ if they want to understand everything that happens in future Marvel movies. This is a clever strategy, because there were nearly 300 million tickets sold for Marvel's Avengers: Infinity War in 2018. 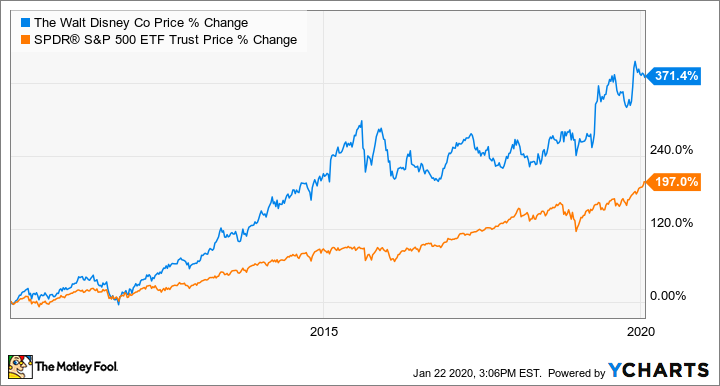 The next decade could be better than the last

The addition of Disney+ to the House of Mouse makes Disney a more compelling growth stock for investors. But let's be clear: Disney+ isn't a Netflix killer. Netflix has a lot of content, and most of it is not meant to be kid friendly. There will be plenty of people who maintain a subscription to both offerings.

However, it's possible that Disney could have roughly as many subscribers as Netflix in the long run. Analysts expect Netflix to reach 300 million subscribers in five years. It will likely take Disney longer to get there, but Disney+ should also be growing faster than Netflix through 2024 as it takes off from a smaller base.

Whether Disney sees Netflix as an enemy or not, management certainly seems to be gunning for a big subscriber base. Disney's investor day presentation last April mentioned there were 900 million people who bought tickets to see Disney movies in 2018. Management believes that's a built-in base of potential subscribers to Disney+.

The rest of Disney, including its theme parks, media networks, and merchandise, should continue to generate modest growth like it has historically. Disney stock nearly quintupled over the last 10 years based on performance from these core businesses. Now, with direct-to-consumer and streaming TV taking center stage, the next decade should be just as rewarding for Disney investors.