Please ensure Javascript is enabled for purposes of website accessibility
Log In Help Join The Motley Fool
Free Article Join Over 1 Million Premium Members And Get More In-Depth Stock Guidance and Research
By James Brumley - Jan 25, 2020 at 11:10AM

Value investors want nothing to do with it, but there's more here than a mere story.

With its shares up 120% over the course of the past 12 months, Paycom Software (PAYC 7.13%) ranks as one of the market's best performers for the timeframe. Even more remarkable, however, is how much investors are willing to pay to plug into the company's admittedly impressive growth. As of the latest look, Paycom shares are priced at more than 70 times this year's expected per-share earnings of $4.28. You do have to pay for quality, but there are logical limits.

When one takes a more thorough look at this company, its backstory, and its trajectory, though, the sustained rally actually makes a lot of sense. Investors have latched onto three particular themes.

An increasingly attractive industry to invest in

To say Paycom Software is a human resources software company understates what the company offers. It offers solutions ranging from recruitment to payroll to benefits management, and more. Not only has a persistently strong job market made finding employees tough, but employees have also raised the bar on how they expect to be treated by employers. 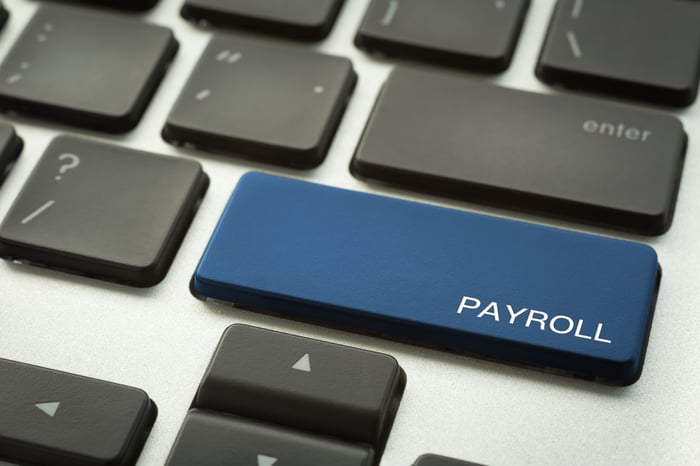 To this end, note that shares of Paycom rival Ceridian HCM Holding (CDAY 6.86%) have performed similarly despite its similarly rich valuation. Ceridian's stock has gained 89% since the latter part of last January, with investors seemingly unfazed by the fact that they're paying more than 100 times this year's estimated income to own a piece of the company.

Investors may be just as interested in exposure to the industry as they are in Paycom.

The purpose of any company is to turn revenue into a profit, and, ideally, grow both. As such, the fact that Paycom is profitable and growing the bottom line isn't remarkable in and of itself. What's so remarkable to investors here and now is the pace at which Paycom is doing so. Fiscal 2019's projected near-30% revenue growth is expected to push 2018's earnings of $2.67 per share to $3.42 -- a 28% improvement. Revenue comps will become a little tougher in 2020, but analysts are estimating earnings of $4.28 per share for the year now underway. That's 25% better than 2019's likely bottom line. 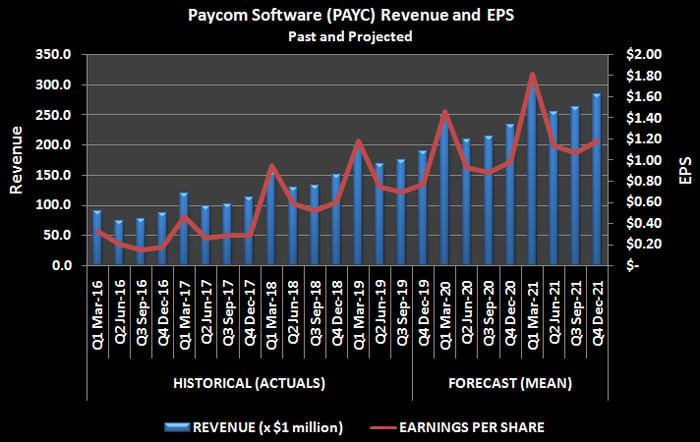 Notice analysts aren't expecting the trajectory to taper off anytime soon, either.

It's a recurring revenue name

Finally, it's not often brought up by fans and followers of the stock, but Paycom Software's business is the quintessential recurring revenue model. That is to say, rather than one-time purchases of a software package, Paycom's customers rent or lease cloud-based access to its human resources tools. Of last quarter's $175 million in revenue, $171.4 million of it was recurring revenue. This approach gives the organization and its investors a rather clear idea of what's in the revenue pipeline for several quarters into the future.

It's a model that doesn't appear to be losing its luster soon, either. Microsoft sells web-based access to its office productivity suite now, and companies, as well as consumers, love it. Cybersecurity name FireEye is another tech outfit that's seeing growth with its subscription-based products, which are constantly updated without requiring new downloads.

Software as a service is the new norm.

But is Paycom Software worth paying more than 70 times this year's expected income to own? It's a matter of perspective -- and opinion.

On the surface, the answer is "no." The cost of profits per dollar invested in Paycom isn't "worth it" given so many other, less expensive options. Warren Buffett has made a fortune by stepping into undervalued names and avoiding expensive ones.

On the other hand, it would be naive to overlook the fact that some story stocks are performing amazingly well despite sky-high valuations. Amazon.com habitually sports triple-digit P/E ratios -- and has since its 1997 IPO -- yet has logged a gain of more than 100,000% since it became a publicly traded instrument. The moral of the story is: Don't get too bogged down by what seems like a frothy price.

Still, it wouldn't hurt Paycom's shareholders to keep close tabs on its chart ... just in case.