Please ensure Javascript is enabled for purposes of website accessibility
Log In Help Join The Motley Fool
Free Article Join Over 1 Million Premium Members And Get More In-Depth Stock Guidance and Research
By Aditya Raghunath - Jan 26, 2020 at 9:15AM

Amazon and Alibaba are heavyweights in the tech space. They are also in a good position to increase shareholder wealth long-term.

Lately, it seems like there are few bargain options left out there for investors. With many stocks on the exchanges trading at or near record highs and yields for debt investments remaining low, indications are that the economy is close to its peak. That has some investors instead bracing for a slowdown.

Investing legend Warren Buffett seems to agree that the markets are overvalued. His holding company Berkshire Hathaway is sitting on cash reserves amounting to $128 billion at the end of the last reported quarter. That's a good sign his company doesn't see any big bargains to invest that cash hoard in.

But if you look hard enough, you can find a few mega-cap stocks -- those with market capitalizations over $200 billion -- that are trading at reasonable valuations while still experiencing stellar growth. Here are two tech giants, Amazon (AMZN 3.66%) and Alibaba (BABA -1.13%), that fit the criteria and are potential winners for long-term investors. 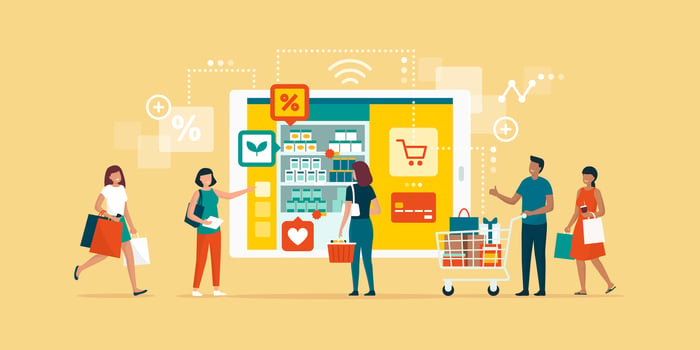 1. Amazon has a path to keep crushing market returns

Amazon stock has been on an impressive rally since the last recession. The stock has gained a monumental 4,800% since November 2008. While continuing to grow its e-commerce market at a stellar rate, Amazon also invested heavily in high-margin segments such as cloud computing and advertising.

Amazon Web Services (AWS) is the largest player in the public cloud space with a market share of 47.8%, according to Gartner. Yes, Amazon has lost market share to Microsoft, Alphabet, and Alibaba in recent quarters, in the public cloud segment. Amazon's cloud revenue is also decelerating but the company still managed to grow cloud sales by a healthy 35% in the third quarter.

AWS continues to increase its customer base. It caters to millions of customers including governments, non-profit organizations, start-ups, and large enterprises. Last month, Amazon announced that it will partner with the FINRA (Financial Industry Regulatory Authority) as the cloud provider for the latter's Consolidated Audit Trail (CAT). This will help stock exchange regulators to improve market surveillance as CAT will have the capacity to compile data from 22 stock exchanges and ingest 100 billion transactions per day.

In order to increase its customer base, Amazon is investing heavily in machine learning technologies. It launched the SageMaker in 2017 to be used as a tool that removes complexity and guesswork from the machine learning process. Amazon has claimed that several customers are able to build machine learning models on top of AWS, using SageWork.

Amazon will benefit from an expanding addressable market

According to Gartner, the public cloud market is expected to grow by 17% in 2020 to $266.4 billion and is expected to touch $354.6 billion by 2022. Gartner states demand will be driven by "modern applications and workloads, which require infrastructure that traditional data centers cannot meet." Likewise, the infrastructure-as-a-service (IaaS) segment is expected to grow by 24% to $50 billion in 2020 and reach $74.1 billion in 2022 which means Amazon's total addressable market continues to expand.

Amazon Web Services is the company's cash cow and accounts for the majority of its earnings. In the third quarter, AWS reported an operating income of $2.26 billion, which was 71.6% of the company's total operating income. Due to strong sales growth in AWS, Amazon has managed to increase earnings at a rapid pace. In the last five years, earnings have grown at an annual rate of 100.6%.

Amazon is a growing player in digital advertising

Another high growth segment for the company advertising. The ad business fueled Amazon's "Other" business segment to growth of 44% year over year in the third quarter.

Amazon is now the third-largest digital advertising platform after Alphabet's Google and Facebook. According to e-Marketer, Amazon ad sales in the U.S. totaled $9.85 billion in 2019 and accounted for 7.6% of the total market. Amazon is now looking to leverage the audience base of 40 million FireTV users to build a sizable video-ad business.

Similar to AWS, the ad business is also a high-margin one, although the details of its margins are not made public. These two segments will help offset any margin pressure from Amazon's traditional e-commerce business.

Amazon continues to pump in money in e-commerce. In April 2019, it allocated $800 million to expand its one-day delivery program which resulted in an earnings miss for the firm in the last two quarters. This earnings miss has led to Amazon underperforming the S&P 500 in the last 12 months. AMZN stock has gained 13% in the last year, compared to the 24.7% returns of the S&P 500.

The holiday quarter of 2019 is critical for Amazon stock price. If it manages to beat Wall Street earnings estimates and provides strong guidance, investors can expect the stock to soar higher and the stock can regain the trillion-dollar valuation it briefly held in 2018.

We can see that Amazon is part of a high-growth segment. The global e-commerce sales (especially in emerging economies) will grow at a robust pace as will the public cloud and digital ad segments.

Amazon is currently valued at $925 billion in terms of market cap or 3.3 times forward sales. The stock's forward price-to-earnings multiple of 70 might be considered expensive, but the company is expected to expand earnings at a solid pace in 2020 and beyond (around 30%), according to Wall Street estimates.

Shares of China's tech giant Alibaba are trading around $217, which is about 220% higher than its IPO price of $68. The company went public in September 2014 and has managed to outperform broader markets ever since.

Like several other stocks, Alibaba lost considerable value in the second half of 2018 due to escalating U.S.-China trade war concerns and a slowing Chinese economy. The stock fell by about 20% in 2018. It then surged by 55% in 2019 on the back of its strong quarterly results, cheap valuation, and the easing of trade tensions in the fall of the year between the United States and China.

Alibaba is investing heavily in the cloud

Alibaba is China's leading online marketplace. Its core commerce segment generates the majority of revenue. The company is now starting to expand into other avenues including cloud computing and digital media and entertainment.

Alibaba continues to invest heavily in research and development and is focused on improving product offerings. Though China's economy is slowing, it still grew by at least 6% in 2019. The country has 800 million internet users and the transition to 5G technologies will result in an increased demand for e-commerce, data protection, and public cloud services.

In 2018, Gartner estimated Alibaba's cloud revenue growth at 92.6%, which was the highest among the top players. Comparatively, Amazon, Alphabet, and Microsoft grew cloud sales by 26.8%, 60.2%, and 60.9% respectively.

With a network of 18 data centers and 42 zones (networks with geographical regions), Alibaba is the largest advanced cloud network with over 1,000 content delivery network (CDN) nodes and seven deployment regions.

Mobile payments could be a significant growth driver for Alibaba

Alibaba is also banking on the mobile payments space to drive top-line growth higher. It has a 33% equity stake in Ant Financial. The latter has expanded its user base to offer a comprehensive set of financial solutions including digital payments and digital financial services.

At the end of June 2019, Alipay has an active annual user base of 1.2 billion. The company has tremendous scope for international expansion as over 900 million Alipay users are from China.

Alibaba is now focused on growing a brick-and-mortar presence with 170 Freshippo cashless grocery stores in China which are integrated with Alipay for payments. These tailwinds will drive company sales higher.

Amazon and Alibaba have both crushed market returns in the past and it looks like there is no stopping them. The demand for cloud services, and global growth in e-commerce, as well as mobile payment users, are key drivers for these mega-cap stocks. A dip in stock prices should not spook investors. Instead, it needs to be viewed as a buy-and-hold opportunity for stocks set to keep growing over the next decade.