Please ensure Javascript is enabled for purposes of website accessibility
Log In Help Join The Motley Fool
Free Article Join Over 1 Million Premium Members And Get More In-Depth Stock Guidance and Research
By David Jagielski - Jan 27, 2020 at 9:25AM

Vaping-related illnesses continue to be a big problem for the cannabis industry.

Vaping was supposed to be a segment of the cannabis industry that would generate considerable growth opportunities. Today, however, there are many questions surrounding vaping and the health risks relating to it, which is why many consumers are simply avoiding vape products altogether. And that's not good news for a cannabis industry that already faces many other challenges.

Research companies BDS Analytics and Arcview Market Research released data this month on how vape products have done in the months following the outbreak of lung injuries tied to vaping.

That's a decline of $41 million, or 26%, in just two months, according to the latest data available from BDS and Arcview, which pull in data from several states using its GreenEdge sales tracking platform. 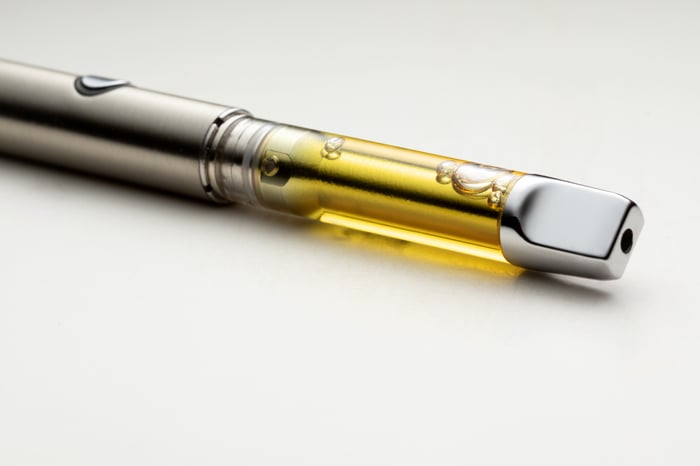 That's a significant decline, especially when earlier data showed that vape sales in 2019, prior to the health outbreak, accounted for a quarter of cannabis product sales. BDS and Arcview were expecting vape sales to reach $10.6 billion by 2024. Now, however, there are too many questions surrounding vaping to know whether that figure is still attainable.

Tom Adams, who represents both research companies, stated in a press release that "The popularity of vaping is a central pillar of our forecasts of the future growth of cannabis sales."

Without strong vape sales, the industry's whole growth projections could be in jeopardy and wreak havoc for marijuana stocks that are already struggling to turn profits and to meet revenue expectations.

Why things may only get worse

As bad as things have been, there's the potential for regulators to come down even harder. Although the Centers for Diseases Control and Prevention (CDC) believes that Vitamin E Acetate is behind the illnesses, that hasn't put the issue at rest, especially as people continue to fall ill.

The Food and Drug Administration (FDA) is taking things one step further, looking at potentially taking vaping products off store shelves completely. It is targeting the e-cigarette market, and if vape companies such as industry leader Juul can't prove that their products don't do more harm than good, the FDA may opt to pull their products entirely.

The data currently isn't there to support that e-cigarettes help people curb smoking addictions. And although the focus is on e-cigarettes, if vape products aren't available or are in limited supply, that will likely have a ripple effect on cannabis users who may find it more difficult to obtain them legally.

The danger is that if regulators pull products from stores, it could encourage users to go the black market, which would negatively affect legal sales. Data suggest that teens continue to vape more marijuana even amid these illnesses, which means the demand is still strong. And if users can't access legal vape products, that may result in the black market flourishing.

Not only will that hurt the legal market, but it could also put users at risk, as the CDC has tied just 16% of vaping-related illnesses back to purchases made at legal stores.

A decline in vape sales is bad news for Altria (MO 1.13%), which invested billions in Juul and has already written down its investment by $4.5 billion as a result of concerns in the vaping market. The company is also banking on a strong vape market for its investment in cannabis producer Cronos Group to pay off as well. Cronos, like many other marijuana stocks, has been struggling in recent months and is down by almost two-thirds over the past year, even worse than how the Horizons Marijuana Life Sciences ETF performed during that time.

There are multiple ways Altria can be hit from more of a crackdown on vaping, which could lead to another writedown in Juul or perhaps even Cronos, which would put a big dent in the company's bottom line, again. Even if that doesn't happen, the exposure that Altria has to vaping can make the stock too risky of a buy for risk-averse investors, and additional scrutiny or restrictions on vape products could send its share price down.

Vape stocks are as risky as they've ever been. Investors should avoid companies that have significant exposure to vaping, at least until there are fewer question marks surrounding the future of vape products.