Please ensure Javascript is enabled for purposes of website accessibility
Log In Help Join The Motley Fool
Free Article Join Over 1 Million Premium Members And Get More In-Depth Stock Guidance and Research
By Justin Cardwell - Jan 28, 2020 at 9:06AM

The transition from cereal to snacks and meatless products provides a compelling opportunity for Kellogg.

Shares of Kellogg (K -0.10%) fell 20% between the beginning of 2017 and the end of 2018 as consumers transitioned away from cereal products. During 2019, Kellogg's share price increased 18.8% with new CEO Steven Cahillane at the helm, driving efficiency and expanding profitable segments.

What does 2020 look like for this consumer staples product manufacturer? Three factors should renew investors' outlook on Kellogg, creating a compelling opportunity for establishing a long-term position. 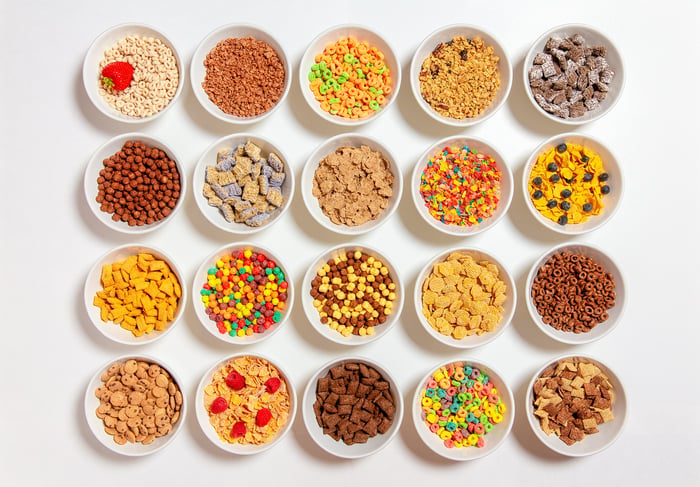 An increased focus on snack products

During the first, second, and third quarters of 2019, cereal sales in North America -- Kellogg's largest geographic segment -- decreased 4%, 3%, and 5%, respectively. The decline in cereal sales has forced Kellogg to increase its concentration around snacks, divesting underperforming brands.

Kellogg's five power brands -- Pop-Tarts, RXBAR, Pringles, Rice Krispies Treats, and Cheez-It -- account for 75% of Kellogg's snack sales, according to Cahillane. He said the Cheez-It brand is driving growth for the U.S. crackers segment with a $1 billion value. Kellogg states that the new Cheez-It Snap'd crisps are selling at peak capacity, as boxes are flying off the shelves just as fast as retailers can stock them. Mordor Intelligence expects growth in snacking products to continue globally, with a projected 5.3% compound annual growth rate (CAGR) between 2019 and 2024.

In combination with an increased focus on snacking, Kellogg's frozen foods segment is growing as the expansion of the meatless product portfolio is under way from the Morningstar Farms brand.

Kellogg's Morningstar Farms brand sells the No. 1 veggie burger in the United States. Selling meatless products such as bacon and chicken nuggets has been fueling growth for Kroger, as third-quarter earnings showed an 11% year-over-year increase.

Competing against large meatless companies such as Beyond Meat (BYND 9.40%) and Impossible Foods, Kellogg has announced plans to release a meatless burger line of products called "Incogmeato," which will be made from soy, similar to the Impossible Burger. Kellogg announced that the product line will hit refrigerated shelves in 2020.

During a Natural Products Expo in March 2019, Morningstar Farms announced a plan for the brand's entire portfolio to be 100% vegan by 2021. By making this conversion, Kellogg will expand its plant-based portfolio into nuggets, burger patties, and tenders.

Emerging markets have delivered growth for Kellogg, specifically in the Asia Pacific, Middle East, and Africa (AMEA) geographic segment, which reported sales growth of 8% during the recent third quarter on a currency-neutral basis. The AMEA segment made up $1.35 billion year-to-date organic net sales for fiscal 2019, accounting for 15% of net sales for Kellogg. Growth in emerging markets is led by noodles, snacks, and cereal products. Year-over-year currency-neutral growth for the geographic segment was 32.4%.

A joint venture in May 2015 between Kellogg and Tolaram Africa Foods to acquire Multipro, a leading distributor of a variety of food products in Nigeria and Ghana, gave Kellogg controlling ownership of 51%. Additionally, Kellogg invested $420 million in Tolaram Africa Foods in May 2018 to expand the product offerings, fueling growth in the region. This acquisition is clearly becoming a success for Kellogg, as the Multipro ownership brought in $271 million organic net sales year-to-date in fiscal 2019 to the AMEA segment.

Kellogg's earnings before interest and taxes (EBIT) margin is expected to continue to improve as long as Kellogg can meet the fiscal 2019 expectation of $1.81 billion EBIT, giving Kellogg an EBIT margin of 13.6% -- 3.4 percentage points higher than it was in fiscal 2016. The net income margin is expected to close fiscal 2019 at 8.2%, and MarketScreener estimates Kellogg at a net income margin of 10.6% in 2021 -- showing higher profitability going forward.

The forward price-to-earnings ratio of 17.8 leaves shares of Kellogg at a decent value in addition to paying a forward dividend yield of 3.2%. As Cahillane continues to pull away from underperforming brands and invest in power brands such as Cheez-It and Pringles, Kellogg has the potential for continued growth in the snack and meatless segments, in addition to an increased focus on emerging markets -- making Kellogg a buy for long-term investors.