The ORV and motorcycle specialist enjoyed broad-based growth to end 2019.

Polaris Industries (PII 4.79%) released better-than-expected fourth-quarter 2019 results on Tuesday morning. With shares of the off-road vehicle (ORV), motorcycle, and boat manufacturer up nearly 6% in response, it's apparent the market is more than pleased.

So starting with its headline numbers, let's dive right in for a better perspective on how Polaris ended its fiscal year, as well as what investors should be watching in the coming quarters.

On an adjusted (non-GAAP) basis -- which excludes one-time items related to restructuring and acquisitions -- Polaris' earnings climbed slightly on a year-over-year basis to $114.9 million, or $1.83 per share. For perspective, most analysts were modeling lower adjusted earnings of $1.79 per share on slightly higher revenue of $1.76 billion. 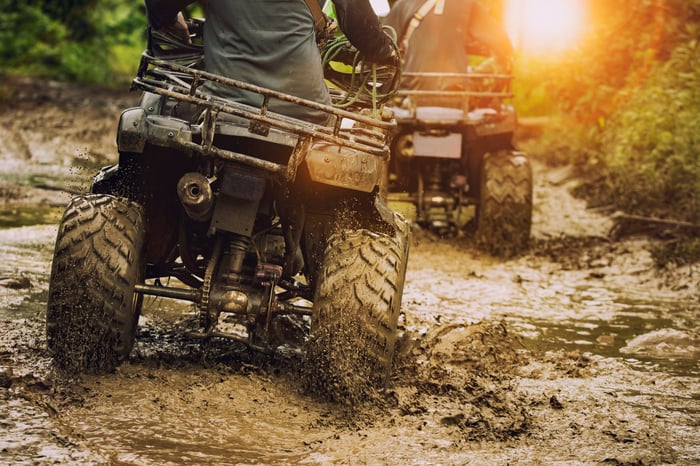 The primary driver of Polaris' top-line outperformance was its motorcycles segment, sales from which soared 37% year over year to $119.5 million as growth from Indian Motorcycles more than offset declines from the Slingshot brand. International growth was key here, as North American consumer retail sales fell in the low-single-digit percent range.

Polaris' core off-road vehicle and snowmobiles segment grew 7% year over year to $1.14 billion, driven primarily by demand for its popular side-by-side vehicles and, to a lesser extent, mid-single-digit percentage growth in ATV sales. Snowmobile wholegood sales declined 10% year over year, largely because of a tough comparison to last year's fourth quarter given the timing of pre-season SnowCheck order shipments.

Meanwhile, global adjacent market segment sales -- which includes specialized military vehicles and commercial ORVs, quadricycles, and electric vehicles -- fell 1% year over year to $120 million. And aftermarket segment revenue grew 4% to $221 million, thanks to a slight 1% increase from Transamerican Auto Parts (TAP) and an impressive 22% bump in sales of other aftermarket brands.

Polaris Chairman and CEO Scott Wine credited the outperformance to momentum in both the off-road vehicles and motorcycles segments, adding that non-TAP aftermarket sales eclipsed $1 billion in annual sales for the first time last year.

Wine elaborated on the impact of the company's recent executive shakeups:

Our recent leadership changes were made to spur both tactical and strategic growth, and the 37 percent increase in Indian Motorcycle sales in the fourth quarter, driven largely by the Indian Challenger, demonstrates what is possible as Mike Dougherty takes over that important segment. Steve Menneto is aggressively moving to accelerate retail performance in Off-Road Vehicles and Snowmobiles, building off a strong year of financial performance in our largest business. In 2019, we delivered strong operational performance across Polaris, especially productivity and delivery, and we expect further gains to create value for customers and shareholders in the year ahead. Our commitment to being a customer-centric highly profitable growth company is unwavering, and I am extremely confident in this Polaris team to deliver on that promise.

Peering down the road to the full year of 2020, Polaris provided initial guidance for revenue to increase 2% to 4% year over year, or to a range of $6.92 billion to $7.05 billion. And with the caveat that tariffs remain "a significant headwind on an annualized basis," management also said this should translate to adjusted net income per share of $6.80 to $7.05, up from $6.32 per share in 2019, and -- based on the midpoint of that range -- favorably comparing to consensus estimates for 2020 earnings of $6.84 per share.

All told, I think Polaris investors are rightly relieved that its top-line headwinds aren't coming at the expense of profitability. With shares down around 12% over the past four weeks alone, this top stock is responding in kind.