Please ensure Javascript is enabled for purposes of website accessibility
Log In Help Join The Motley Fool
Free Article Join Over 1 Million Premium Members And Get More In-Depth Stock Guidance and Research
By Dave Kovaleski - Jan 28, 2020 at 9:31AM

The oil and gas exploration company has faced strong headwinds, but seems to be headed in the right direction.

The oil and gas industry didn't have a great year in 2019, as crude oil prices dropped about 9% and natural gas prices dropped 18% amid a continued increase in supply. While that's good for consumers, it wasn't so positive for oil and gas companies and their investors. Over the past 12 months, the oil and gas production sector has declined about 6%. One of the laggards in the sector has been Cimarex Energy (XEC), which was down about 14% in 2019 and is down roughly 8% year to date.

Cimarex, based in Denver, is a shale oil and gas driller with operations in Oklahoma, Texas, and New Mexico. Most of its drilling and exploration activity is in the Permian Basin in Texas and the Anadarko Basin in western Oklahoma. Its production mix is more weighted toward gas, which saw even lower commodity prices than oil last year due to the continued boom in natural gas production in the United States. More supply means lower prices. 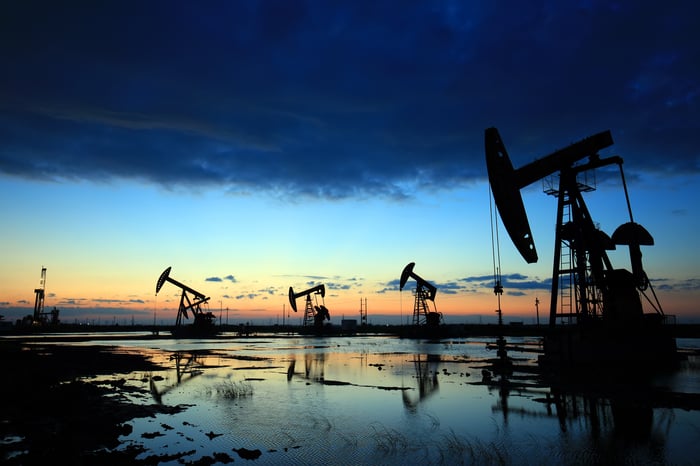 Cimarex Energy is company that drills for gas and oil in Texas and Oklahoma. Image source: Getty Images.

It's been a tough road for Cimarex, which has seen its stock plummet the past three years -- and counting. Can the company turn it around?

Direction of oil and gas prices

Exploration and production companies like Cimarex make money by drilling oil and gas wells and selling the raw materials to companies that refine them. Generally, the higher the price of the commodity, the more money the drillers make.

On the other hand, natural gas prices are expected to continue to fall in 2020, by an estimated 9%, according to EIA. In 2021, gas prices are forecast to bounce back to near 2019.  These are, of course, just predictions and these markets are fraught with uncertainty, but the signs point to little overall change. For Cimarex, which produces more gas than oil, it's even more bleak.

Though a down year for the stock price, Cimarex has managed to increase its oil and gas production by about 40% while reducing costs.

At the start of last year, CEO Thomas Jorden made a commitment to cut production costs and be cash-flow neutral without adding any debt. Through the third quarter of last year, the company had delivered on that goal, as production expenses dropped 12% year over year.

The company had a positive cash balance of $24 million at the end of the quarter.

As the stock price has declined for the past three-plus years, it's become extremely undervalued, trading at just over nine times earnings. Analysts have taken notice as many rate the stock as a solid buy.   While Cimarex seems headed in the right direction in terms of reducing expenses, investors may want to proceed with caution and watch the direction of commodity prices as the year progresses before jumping in.