Please ensure Javascript is enabled for purposes of website accessibility
Log In Help Join The Motley Fool
Free Article Join Over 1 Million Premium Members And Get More In-Depth Stock Guidance and Research
By Evan Niu, CFA - Jan 29, 2020 at 6:00AM

In celebration of Data Privacy Day yesterday, Facebook (META 7.19%) rolled out a tool that gives users even greater control over their privacy. The social networking juggernaut has long tracked user activity that happens outside of Facebook. Much of that information is shared with Facebook by third-party apps and websites, and ultimately used for ad-targeting purposes. Facebook first announced its "Off-Facebook Activity" tracking tool last August, and initially rolled it out to Ireland, South Korea, and Spain.

CEO Mark Zuckerberg announced in a blog post this week that Off-Facebook Activity is now available worldwide. Will this help Facebook improve its tattered reputation? 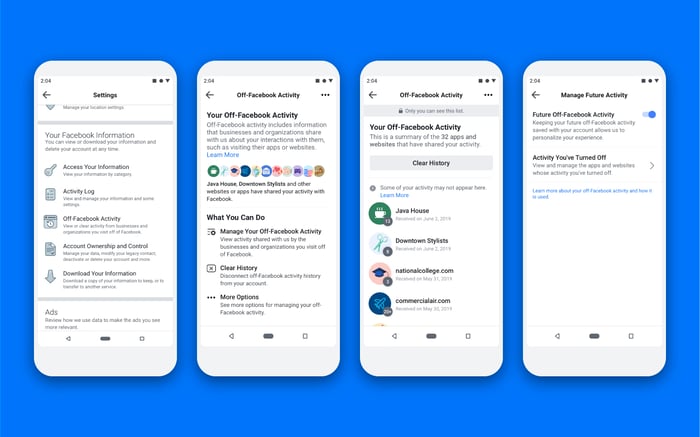 "One of our main goals for the next decade is to build much stronger privacy protections for everyone on Facebook," Zuckerberg writes in a familiar refrain. "We know we have a lot of work to do here, which is why this is such a priority for our teams and for me personally."

The platform will nudge nearly 2 billion users to review their privacy settings within the next several weeks, according to Zuck. Following years of data scandals and controversy, Facebook likes to now fancy itself a champion of privacy. At CES earlier this month, Facebook privacy exec Erin Egan even went as far as to argue that many of Facebook's privacy protections are as strong as Apple's.

Facebook's "Clear History" privacy feature, which was first announced in 2018 and subsequently delayed due to technical challenges, is part of the new tool. By clearing off-Facebook activity, users can dissociate their Facebook accounts with information that other apps and sites collect.

To be clear, Facebook still retains this data, it just removes all identifying information and anonymizes the information. That data can then no longer be used to target ads on Facebook, Instagram, or Messenger. "We expect this could have some impact on our business, but we believe giving people control over their data is more important," Egan had said last year.

Creepily tracking people around the internet to target ads is hardly a new phenomenon. Facebook merely built an advertising engine that took targeting to an unprecedented level, thanks to all of the personal information that users voluntarily shared with the platform. It's all part of what Apple CEO Tim Cook has billed a "shadow economy" that feeds into the "data-industrial complex," even as Apple indirectly contributes to that apparatus.

Being able to clear off-Facebook activity is a privacy win for the average consumer that will limit pesky ads from following them around the web -- if they're motivated enough to use it. However, Facebook's user metrics have remained remarkably resilient over the years despite never-ending controversy and heightened scrutiny -- 2.8 billion people use one of its core services every month. That suggests that many regular people still aren't all that concerned.

Facebook is set to report fourth-quarter earnings results after the market close.