Please ensure Javascript is enabled for purposes of website accessibility
Log In Help Join The Motley Fool
Free Article Join Over 1 Million Premium Members And Get More In-Depth Stock Guidance and Research
By Greg Jones - Jan 29, 2020 at 8:31AM

IBM released earnings that were better than expected. Although the results were mixed, investors should be taking a closer look at the stock.

Earnings season has generally not been kind to IBM's (IBM -0.81%) stock. In the last two years, IBM's share price has fallen more than it's risen following its earnings report. The most recent quarterly report has been an exception, with the stock rising over 3% during the trading day following the report.

Is this an aberration or could it be the start of a trend?

IBM's earnings surprised on the upside....

On the surface, IBM's fourth-quarter results provided cause for optimism. Both revenue and earnings outperformed expectations, with revenue growing 0.1% -- breaking a streak of five quarters where revenue declined year over year. Cloud revenue, a strategic focus for the tech company, rose 21% helping drive a 190-basis point improvement in gross profit margins. Nor was the outperformance limited to the current quarter -- the company raised its adjusted earnings per share estimates for 2020 from $12.80 to $13.35.

To cap it off, IBM's CEO commented that the company was positioned for "sustained revenue growth in 2020." It's not a surprise, then, that the stock reacted the way it did. 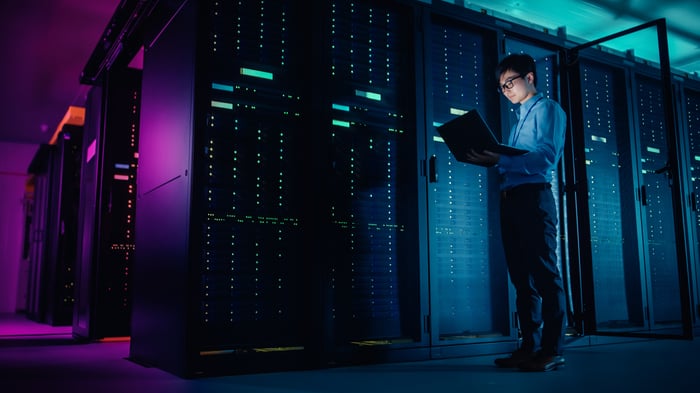 To determine whether such outperformance is sustainable requires a more detailed look at the performance of IBM's various segments, specifically the distinction between its legacy businesses and its so-called strategic imperatives -- initiatives aimed at emerging technologies such as the cloud, cyber-security, and artificial intelligence. The bull case for IBM's shares is premised on growth in the latter more than offsetting a decline in the former.

...But a detailed look provides a more nuanced picture

An exception to this trend was IBM's legacy Systems business which saw a 16% increase in revenue, driven by the launch of a new mainframe cycle. This will likely continue to support earnings over the near-term. However, mainframe cycles tend to last for only about five quarters or so, and thus the impact may be a fleeting one. Excluding this, overall revenue would have declined year over year.

Moreover, IBM's other legacy businesses are likely to see further headwinds, if a recent survey of corporate chief investment officers (CIO's) by Morgan Stanley is any indication. The survey suggested that CIOs planned to spend less on IBM's software and IT services, which prompted a recent downgrade by a Morgan Stanley analyst. With IBM's legacy and new businesses pulling in opposite directions, any further softness in the former will likely take a toll on overall revenue growth.

The case for investing in IBM, however, is a long-term one -- where success should be measured in terms of years rather than quarters. Its acquisition of Red Hat was designed to jump-start IBM's efforts to capitalize on the $1.2 trillion hybrid-cloud market, and synergies are already starting to materialize. For example, the number of new service engagements leveraging Red Hat nearly doubled across GBS and GTS versus the previous quarter. These synergies will continue to grow in the years ahead.

Meanwhile, IBM remains one of the highest yielding dividend stocks within the technology sector, with a 4.7% yield. With dividends accounting for less than 50% of the company's free cash flow, there is plenty of room to extend its dividend growth streak of 24 years. And, at a price-to-forward adjusted earnings ratio of a little more than 10, the market is not giving IBM the benefit of the doubt -- which could set the stage for a sustained rally in the event that it surprises on the upside.