Intuitive Surgical (ISRG 2.53%) is the company behind the da Vinci surgical system, one of the leading robotic-assisted surgery devices on the market. The da Vinci system was first approved by the U.S. Food and Drug Administration (FDA) back in 2000, and the innovative piece of tech has helped Intuitive Surgical perform incredibly well over the years.

The company's shares are up by 236.4% over the past five years alone, whereas the S&P 500 is up by only 61.4% over the same period. Despite being about two decades old, though, Intuitive Surgical's signature da Vinci system continues to make headway, and the company's impressive run on the market is likely not over, at least if its latest earnings report is any indication. 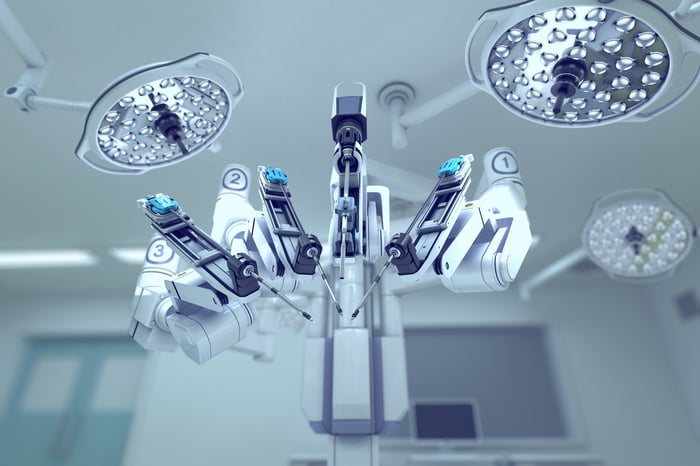 Furthermore, the number of procedures performed with da Vinci systems increased by 19% year over year, while Intuitive Surgical's revenue of $1.28 billion and its net income under generally accepted accounting principles (GAAP) of $358 million both grew by about 22%. Digging a little deeper, it is worth noting that the company's top line now relies primarily on its recurring revenue.

Once a healthcare provider installs one of its da Vinci systems, Intuitive Surgical provides various services -- including maintenance and repair services -- to that provider. The company also generates revenue from leasing its da Vinci system. These pricey devices cost anywhere between $500,000 and $2.5 million depending on several factors (the model, configuration, etc.), a sum that is beyond the means of some healthcare providers.

Intuitive Surgical is currently trading at 49.37 times past and 37 times future earnings. Also, the company's price-to-earnings growth (PEG) ratio is 3.89. These valuation metrics aren't particularly attractive, but if there's any company that is worth the premium, Intuitive Surgical most definitely is.

The company is the leader in robotic-assisted surgery devices, and despite some 20 years of growth under its belt, Intuitive Surgical continues to make headway. What's more, the company's top line is relying more and more on recurring revenue, and as the number of procedures performed with its da Vinci system continues to rise, so will that recurring revenue.

Of course, there are no certainties in life, but given the strength of its model, Intuitive Surgical looks like a screaming buy. Investors looking for top growth stocks need not look any further.