Researchers at the Massachusetts Institute of Technology (MIT) have succeeded in developing a bionic heart that fuses both organic muscle alongside artificial, biorobotic tissues. This new hybrid heart isn't meant for patients, but rather, will be used by medical engineers to test out new cardiac devices, such as prosthetic valve implants.

The device first began with a real human heart which was wrapped in a set of artificial robotic muscles that simulate a human heart's contractions. While it's an impressive technical achievement to produce a heart which so accurately mimics the human heart, this device is expected to be very useful for medical device makers, that can better test new cardiac devices for potential complications without using live patients. 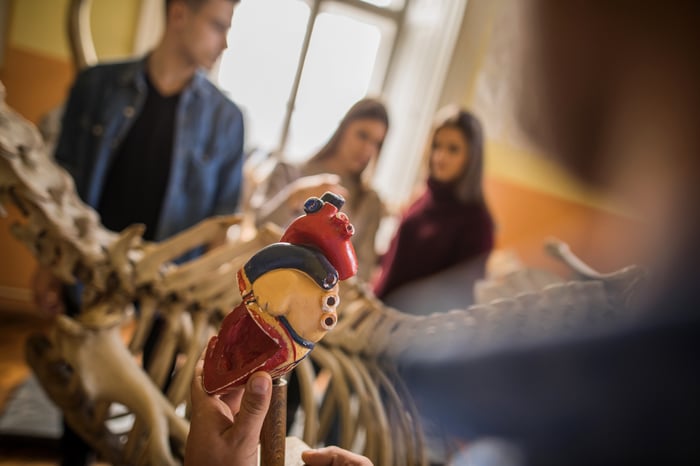 Ellen Roche, an MIT assistant professor of mechanical engineering, said "regulatory testing of cardiac devices requires many fatigue tests and animal tests." She added that the device "could realistically represent what happens in a real heart, to reduce the amount of animal testing or iterate the design more quickly."

The global market for cardiovascular devices is growing at a steady rate, with some estimates putting the global cardiac device market at $59.1 billion by 2022. While still at an experimental stage, this device could be useful for major medical device manufacturers, such as Abbott Laboratories (ABT -0.46%) and Medtronic (MDT -0.51%), in helping test the next generation of cardiac devices. Shares of Abbott recently jumped to an all-time high following strong quarterly sales estimates driven primarily from the sale of its heart and diabetes devices.