Please ensure Javascript is enabled for purposes of website accessibility
Log In Help Join The Motley Fool
Free Article Join Over 1 Million Premium Members And Get More In-Depth Stock Guidance and Research
By Lee Samaha - Jan 29, 2020 at 9:30AM

In this eclectic group of companies, all the stocks look like good values, but for widely different reasons.

The six stocks discussed all have market caps less than $10 billion and all look like good values -- but that's about all they have in common. Let's take a closer look at what makes these stocks attractive to investors.

They range from those with relatively safe end-markets like infrastructure maintenance machinery company Alamo Group (ALG 3.26%) to those with highly cyclical end-markets like axle, gear, and brake manufacturer Meritor (MTOR -0.19%) and automation and power transmission company Altra Industrial (AIMC 9.27%).

Industrial software company PTC (PTC 3.62%) looks like it has a favorable secular tailwind from spending on smart factories, while aviation services company AAR (AIR 3.66%) looks relatively undervalued in its sector. Finally, marine engine and boat manufacturer Brunswick (BC 2.23%) offers investors a way to play the theme of an aging U.S. demographic that is spending more money on leisure. 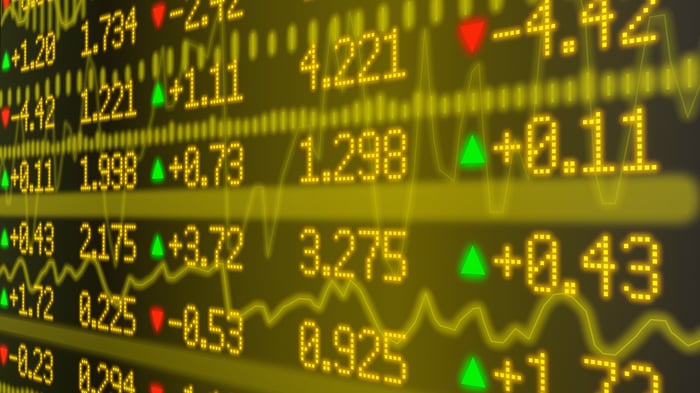 Let's start by considering their valuations in terms of enterprise value (calculated as market cap plus net debt) divided by earnings before interest, taxation, depreciation, and amortization. To put these figures into context, the current EV/EBITDA ratio on the S&P 500 is slightly above 14. As a rough rule of thumb for investing, I would argue that any company with an EV/EBITDA below 11 is a good value. 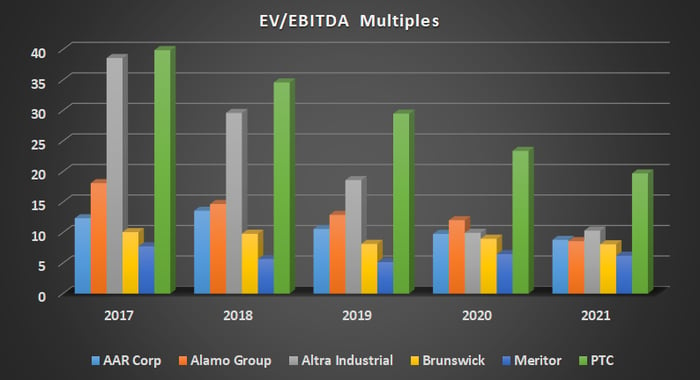 Data source: Marketscreener.com and Yahoo finance. EV values are based on current valuation. Figures after 2018 are generated using analyst estimates

Industrial software company is an obvious outlier on this list based on our chosen valuation metric -- but it probably isn't best measured that way, because it's transitioning away from a perpetual-license model and toward a subscription-based revenue model. That means it's foregoing upfront revenue in favor of long term revenue/earnings from subscriptions. A better way to judge PTC is on its average recurring revenue growth (up 11% year over year in its most recent quarter) and its free cash flow (FCF).

PTC's growth is driven by its customers' willingness to use web-enabled devices to connect their physical assets to the web in order to manage them better -- in other words, to climb on board the Internet of Things trend.Given the substantive productivity benefits generated by such moves, the company has a long runway for growth. Indeed, analysts foresee it generating $500 million in FCF in 2022, while PTC's management predicts a figure in the $700 million to $900 million range in 2024. The analyst consensus for 2022 puts PTC on a price-to-FCF multiple of 19 -- that's too cheap for a company growing FCF at such a rapid clip.

Alamo's collection of infrastructure maintenance and agricultural equipment (think street sweepers, mowers, snow-removal equipment) has relatively stable end-markets and there's a clear need for the U.S to invest in infrastructure. Moreover, Alamo has a good track record of acquiring companies and niche markets, then expanding its profit margins. As the chart below shows, the company's doubling of revenue over the last decade has led to a near tripling in its EBITDA. If Alamo can continue along this course, its stock will look like a strong value in a couple of years. 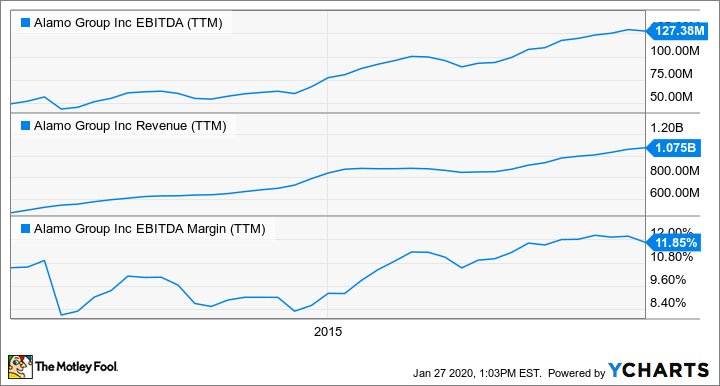 Before buying either of these stocks, investors should weigh the warnings. Meritor's exposure to heavy trucks -- a market set to decline significantly in 2020 -- and Altra's exposure to heavy industries (including trucks) means that each is at a high risk of delivering near-term disappointments to shareholders. The management of truck manufacturer Navistar recently lowered its expectations for industry deliveries and its own revenue in 2020 during its fourth-quarter earnings call in December.

That said, if you can tolerate the likelihood of a stream of bad news in the short term, history suggests that, barring a recession, truck sales will bounce back in a year or two. In the context of that eventuality, the sector would look cheap at current values, and present a good long-term investment. 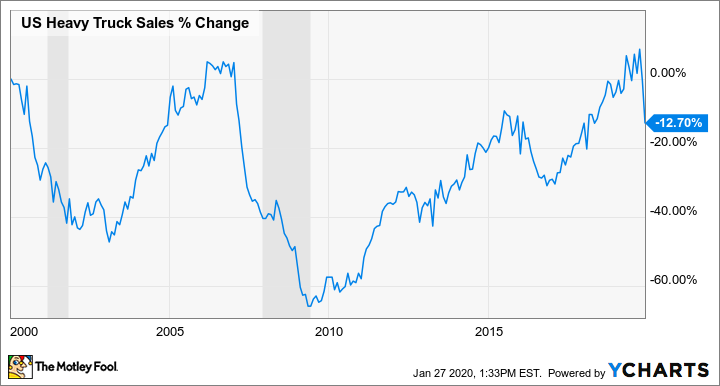 Commercial air passenger growth is undoubtedly slowing from the high-single-digit percentage rates of the last few years, and headed toward something closer to 4% in 2020 and 2021, so there's potential for some disappointment in the industry in 2020.

That said, it's still a mid-single-digit growth outlook, which implies ongoing demand for AAR's commercial aviation supply, and maintenance repair and operations. Moreover, the stock's absolute valuation (see chart above) and relative valuation (see chart below) make it a rare value in a rich sector. 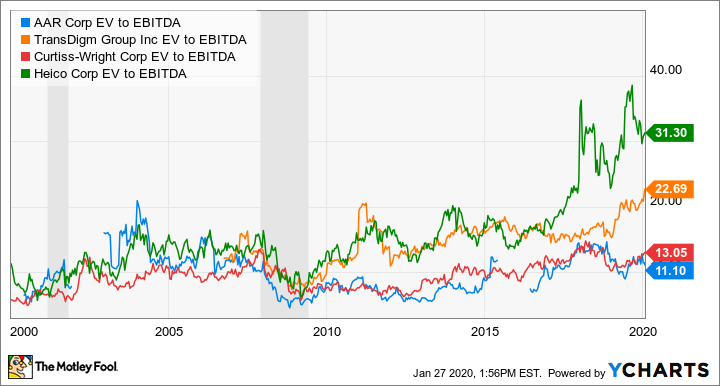 Now that it has sold off its Life Fitness exercise equipment division, Brunswick is fully focused on recreational boats, marine engines, and parts and accessories. The valuation numbers above look good -- the question is whether Brunswick can hit analysts' estimates. A lot will depend on the strength of the ongoing recovery in the recreational boat market, and specifically, the outboard boat market that Brunswick has been positioning itself in. 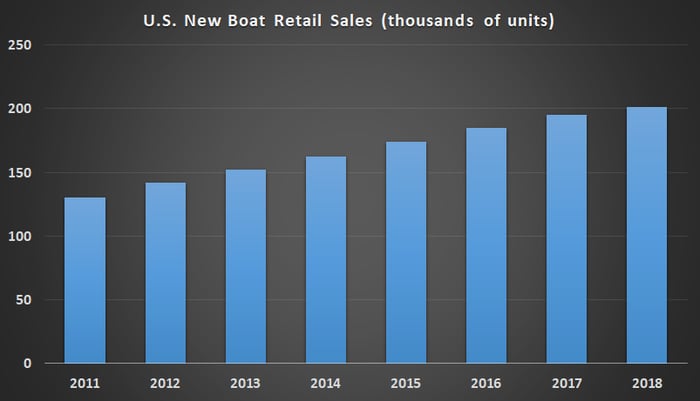 Ultimately, demand will depend on a combination of the state of the economy, the housing market, and consumer preferences. According to the National Marine Manufacturers Association President Frank Hugelmeyer, new powerboat sales in 2019 were close to 2018 figures, but "with the economy on solid footing and key economic indicators like consumer spending remaining strong, we expect another healthy year for new boat sales, which could be up as much as 2%." That would be good news for Brunswick. All told, on a risk/reward basis, this stock looks like a good value.