Bright and early Wednesday morning, at 9:07 a.m. EST to be precise, SpaceX issued its one-word tweet:

And with that tweet, away went SpaceX's fourth "Starlink" mission to put 60 more satellites in orbit -- and advance the day when SpaceX will be able to offer broadband internet service from space, to internet users all around the world.

Three minutes later, SpaceX announced main engine cutoff (MECO), and released its Falcon 9 first stage to return to land on the "Of Course I Still Love You" droneship (which it did so successfully at 9:16, less than 10 minutes after the mission began). The remainder of the package, including Falcon's second stage and its payload of 60 Starlink internet broadband satellites, then proceeded toward orbit, successfully deploying at 10:11 a.m., barely an hour after the whole process began. 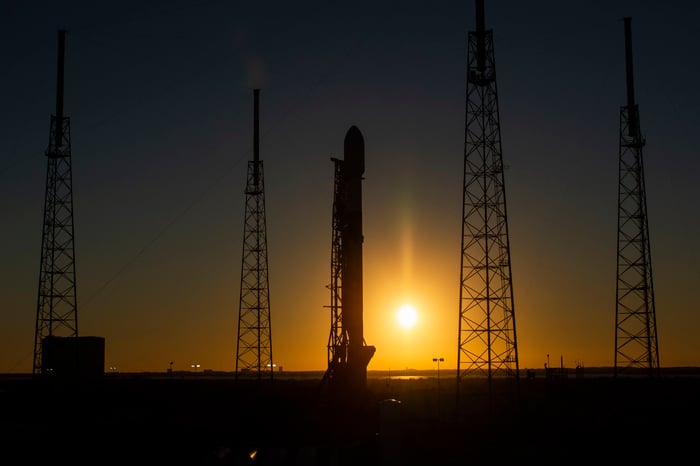 Each successful SpaceX Starlink launch adds 60 new Starlink satellites to the company's growing constellation of broadband internet satellites in orbit. Times four successful missions, this means there are now roughly 240 Starlinks in orbit (actually, a few less than that as not all of the first batch were intended to be used operationally, and some may have already been retired).

SpaceX says it will need to get about 800 satellites in orbit in order to be able to provide "moderate" internet coverage to the globe. So even using an ultraconservative estimate of, say, 200 Starlink satellites now operational, SpaceX is at least 25% of the way toward reaching its goal. Ten more missions -- about five months' worth of launches at the current rate of two per month -- should suffice to enable moderate internet coverage. And as SpaceX continues to grow its satellite fleet toward an ultimate goal of 12,000, or even 42,000 satellites, coverage should get better and better, faster and faster, and more and more profitable for SpaceX.

Sidenote: When all else was said and done, SpaceX announced its "Ms. Tree" net-equipped recovery ship had successfully caught one of two fairing halves containing the satellite payload as it fell back to Earth, the third such successful fairing recovery ever by SpaceX.