MPLX (MPLX 3.15%) has been a bit of an enigma over the past year. Units of the master limited partnership (MLP) have tumbled nearly 30% during the last 12 months even though it has produced solid financial results, which was evident during the fourth quarter. While the company's acquisition of affiliated MLP Andeavor Logistics had some impact, it ended the year on a solid financial footing.

As this table shows, the acquisition of Andeavor had a notable impact on MPLX's fourth-quarter results. The merger helped boost the company's overall earnings by nearly 45%, though it also produced solid 6% organic growth. Furthermore, while the deal increased the number of units outstanding, weighing on its per-unit results, MLPX still comfortably covered its high-yielding payout, which it boosted by another 6.2% last year.

Fueling the company's organic growth was a solid showing by both of its business units: Logistics and storage earnings rose 5% year over year. The main growth driver was increased throughput at its terminals, which rose 4% versus 2018's fourth quarter. That helped offset flat pipeline volumes, mainly due to some project work at Marathon Petroleum's Garyville refinery.

Gathering and processing earnings, meanwhile, increased 7% compared with 2018's level, fueled by higher volumes. The biggest driver was fractionated volumes, which rose 11% as the company separated more natural gas liquids (NGLs) into the various pure streams (i.e., ethane, propane, and butant) thanks to expansions at its facilities. The company's processing business also benefited from the completion of several natural gas processing plants last year, which helped boost its volumes by 7% during the quarter and 14% for the full year. 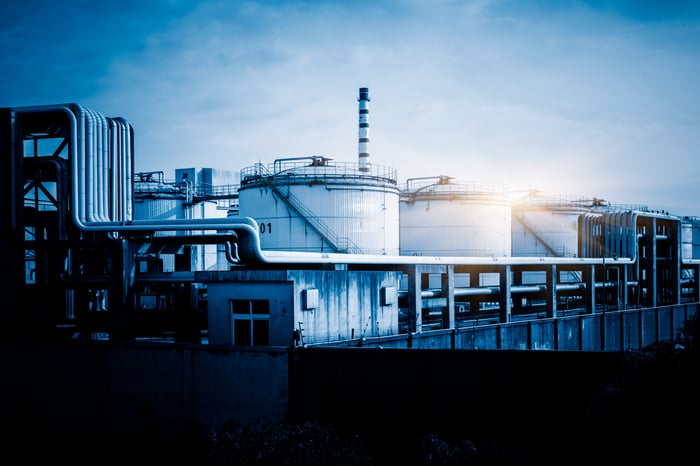 MPLX plans to reduce its capital spending to around $1.5 billion this year. That's the company's second budget adjustment; it initially expected to invest $2.6 billion this year, but then cut that down to $2 billion when it reported its third-quarter results.

That lower budget level will still give the company the funds it needs to continue work on several major expansions, including building out an integrated crude oil and natural gas logistics system from the Permian Basin to the U.S. Gulf Coast. Projects include participating in the construction of the Wink to Webster oil pipeline, the Whistler pipeline that will transport gas, and the proposed BANGL system that would move NGLs. The company will also invest in a project to reverse the flow of oil on the Capline pipeline and complete three more natural gas processing plants.

Those projects will help grow MPLX's cash flow as they come on line over the next year. In the company's view, it will produce enough cash in 2021 to support its current payout and all its additional growth-focused spending that year with room to spare. That would give it the excess funds to pay down debt or start repurchasing its dirt-cheap units.

MPLX continues to produce solid results since it's generating more than enough cash flow to comfortably cover its high-yielding payout. Meanwhile, its financial profile is on track to improve further over the next year as the company completes its current slate of expansions. Because of that, it's big-time payout appears to be sustainable, which makes this dividend stock one that investors won't want to overlook.