Please ensure Javascript is enabled for purposes of website accessibility
Log In Help Join The Motley Fool
Free Article Join Over 1 Million Premium Members And Get More In-Depth Stock Guidance and Research
By Timothy Green - Jan 29, 2020 at 6:52AM

The appliance maker is having no trouble growing profits, even with sales under pressure.

Appliance manufacturer Whirlpool (WHR -2.04%) reported its fourth-quarter results after the market closed on Monday. It was a mixed report relative to analyst expectations, but investors found enough good news to send the stock sharply higher on Tuesday. Here's what you need to know.

1. Revenue was down, but it's complicated

Whirlpool produced total revenue of $5.4 billion in the fourth quarter, down 4.9% year over year and missing analyst estimates by $140 million. However, the details are important.

In North America, Whirlpool recorded a sales decline of just 0.3% to $3.1 billion. The situation was helped by improved pricing and product mix. Other geographies didn't perform as well. Sales were down 5.5% in Europe, Middle East, and Africa, down 21% in Latin America, and down 4.3% in Asia.

Currency and the divestiture of Embraco contributed significantly to the revenue declines. On an organic basis, which excludes both factors, total net sales rose 1.2%. In Latin America, organic net sales rose 16.7%. 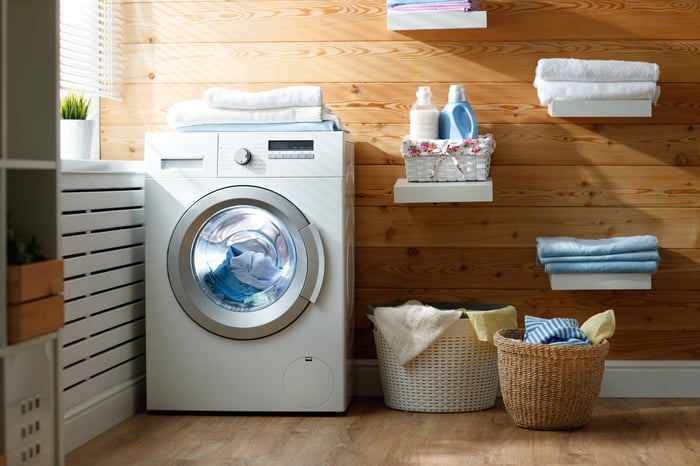 2. The bottom line was up

Despite the revenue decline, Whirlpool managed to produce higher earnings in the fourth quarter than it did in the same period last year.

Non-GAAP (adjusted) earnings per share came in at $4.91, up from $4.75 in the prior-year period and a whopping $0.64 higher than analysts were expecting. Pricing, product mix, and cost discipline contributed to the bottom-line beat.

Globally, adjusted operating margin was 7.2%, up a full percentage point year over year. Pricing, product mix, and cost inflation from raw materials, tariffs, and other sources were all positive factors compared to the prior-year period, while marketing and technology investments and currency had a negative impact.

3. Sales and earnings growth expected in 2020

Whirlpool expects to grow organic net sales by roughly 3% in 2020, in line with its long-term goals. On a reported basis, revenue is expected to be approximately flat.

The company sees its adjusted operating margin rising further in 2020 to 7.5%. That's well below its long-term goal of 10%, but an improvement over 2019.

Adjusted earnings per share is expected in the range of $16.00 to $17.00, driven higher by margin expansion, the impact of share repurchases, and lower interest and other expenses. A higher expected tax rate will work in the opposite direction.

Whirlpool expects to generate free cash flow between $800 million and $900 million this year, down from $912 million in 2019. Restructuring costs and other one-time items will be responsible for the decline.

Whirlpool's practice of including unit sales figures in its quarterly and annual filings with the SEC will come to an end in April. CFO Jim Peters explained in the earnings call that a few factors led to the decision. First, revenue from products not reported as units, such as an upcoming wireless smart thermometer, is increasing. Second, revenue from digital products and services is expected to rise.

The company concluded that unit volume is no longer a good indicator of overall sales performance, and thus will stop reporting it. Investors should always be suspicious when a company stops reporting an important metric, because sometimes, the real reason for the change is to hide deteriorating performance.

While Whirlpool's fourth-quarter results were mixed, the profit improvement despite slumping revenue provided some indication that the company has been able to pass off higher prices to consumers without hurting the bottom line.

Earnings growth in 2020 is another positive, especially with a higher tax rate expected. With the stock trading for less than 10 times the low end of the company's 2020 earnings guidance, there's still a lot of pessimism baked into the stock price. An economic downturn could certainly derail Whirlpool's long-term goals, so some of that pessimism is warranted. But for now, Whirlpool's earnings are holding up well.

Is Whirlpool an Inflation-Fighting Value Stock?