Please ensure Javascript is enabled for purposes of website accessibility
Log In Help Join The Motley Fool
Free Article Join Over 1 Million Premium Members And Get More In-Depth Stock Guidance and Research
By Anders Bylund - Jan 30, 2020 at 7:11AM

It may feel strange to call a 29% sales-growth target for the next year "conservative," but there you go.

Advanced Micro Devices (AMD -3.66%) reported fourth-quarter results on Tuesday evening, and the graphics and system processor designer managed to exceed analysts' estimates across the board. The company set conservative revenue targets for the next quarter and fiscal year. Here's a closer look at AMD's results and upcoming growth prospects.

These results were roughly in line with AMD's fourth-quarter guidance, where the company aimed for revenue near $2.1 billion and adjusted gross margin of roughly 44%. Reported non-GAAP gross margin stopped at 45%, boosted by AMD's rising volume of chips produced via the more cost-effective 7-nanometer manufacturing process.

Sales rose 69% year over year in the computing and graphics division, driven in roughly equal parts by the Ryzen CPU and Radeon gaming GPU products. Average selling prices per unit increased in both of these product lines.

The enterprise, embedded, and semicustom segment posted a 7% revenue increase, boosted by double-digit percentage growth in the data center market but held back by lower sales of semicustom chips. The semicustom business is primarily driven by AMD's presence in the Microsoft Xbox and Sony PlayStation gaming consoles, and both of these console families will launch brand-new models for the 2020 holiday season. As such, fading sales of the current console generation are dragging AMD's semicustom revenue down. The company will power the PlayStation 5 and Xbox Series X machines as well. 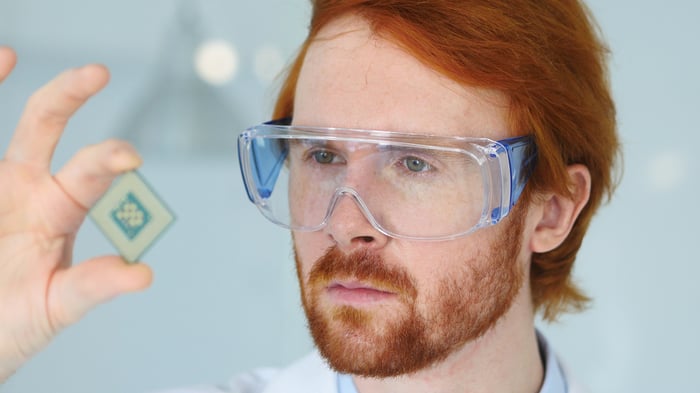 What's next for AMD?

Looking ahead, AMD set its first-quarter revenue guidance at roughly $1.8 billion, 42% above the year-ago period's result and just below the analyst consensus at $1.86 billion. Full-year sales should increase by approximately 29% to roughly $8.7 billion, just a hair above the average Street view at $8.6 billion.

Semicustom revenue will ramp up ahead of the new console launches in Q4, starting in the second quarter but heavily weighted toward the end of the year. Other operations should follow AMD's normal seasonality, apart from potentially stealing market share from larger rival Intel in the data center space as the year moves along.

"In terms of rate and pace of server share gain, it is primarily for cloud customers," said CEO Lisa Su on the earnings call. "I'm quite encouraged actually by the strength of the pipeline that we see, the number of customers that are engaged, and then just, you know, how they're deploying. So, I think we're going at a good pace, and we'll continue to accelerate that as we go through 2020."

AMD's shares fell more than 6% on this report, but the stock has still gained 150% over the last 52 weeks. Call it profit-taking, call it a lack of razzle-dazzle surprises, but there was nothing fundamentally wrong with AMD's performance in the fourth quarter. For high-octane growth stocks like AMD, a small earnings surprise isn't always good enough to sustain a skyrocketing share price.

I'm still impressed by Su's turnaround efforts, transforming AMD from a perennial also-ran to a legitimate Intel alternative in five short years. Over that period, AMD's shares have returned a market-crushing 1,630%.