Please ensure Javascript is enabled for purposes of website accessibility
Log In Help Join The Motley Fool
Free Article Join Over 1 Million Premium Members And Get More In-Depth Stock Guidance and Research
By Timothy Green - Oct 30, 2019 at 11:45AM

Advanced Micro Devices' (AMD 2.45%) third-quarter report was far from a home run. The chip company missed analyst estimates for revenue, it matched expectations for the bottom line, and its fourth-quarter guidance was mostly below what analysts were expecting.

But the story hasn't changed. Strong sales of Ryzen PC processors, EPYC server processors, and Radeon graphics cards drove revenue growth in the quarter, even as revenue derived from the aging game consoles plummeted. Gross margin continued to expand, pushed higher by an increasing focus on higher-end products. AMD's latest batch of products, manufactured on a 7nm process, is clearly winning over customers.

AMD's revenue growth was driven entirely by the computing and graphics segment, which includes Ryzen CPUs and Radeon GPUs. The company launched its third-gen Ryzen chips in July, right alongside two new graphics cards based on its Navi architecture.

Revenue from computing and graphics was $1.28 billion, up 36% year over year. The company enjoyed higher average selling prices for CPUs compared to the prior-year period, as well as higher ASPs and improved channel sales for GPUs. An increase in mobile GPU sales led GPU ASPs to decline from the second quarter.

Profitability in this core segment also improved, with segment operating income of $179 million up 79% year over year. On an adjusted basis, the companywide gross margin was 43%, up from 40% in the prior-year period. 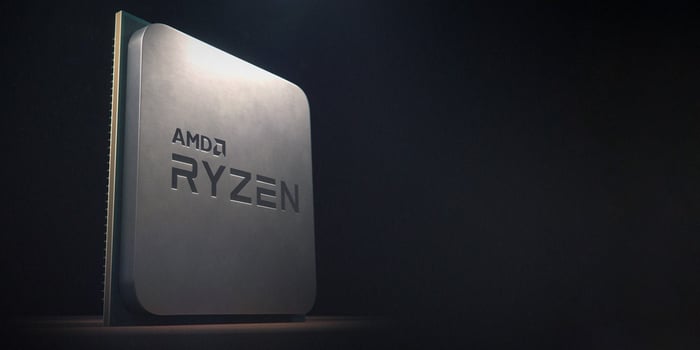 AMD's enterprise, embedded, and semicustom segment, which includes semicustom chips that power the major game consoles, server CPUs, and embedded products, suffered a steep revenue decline. Revenue of $525 million was down 27% year over year due to tumbling sales of semicustom products.

Both Sony and Microsoft have announced that their next-gen game consoles will launch ahead of the holiday season in 2020. Understandably, demand for the current-gen PlayStation 4 and Xbox One consoles has weakened in the lead-up to those launches. AMD chips will power both new consoles next year, so a boost in semicustom revenue is right around the corner.

Operating income for the semicustom segment was $61 million, down 29% year over year. Partly offsetting the weakness in semicustom chips were strong sales of AMD's EPYC server CPUs, although the company didn't disclose numbers for EPYC.

A strong fourth quarter is coming

For the fourth quarter, AMD expects to produce revenue of $2.1 billion, plus or minus $50 million. That compares to an average analyst estimate of $2.15 billion, and it represents year-over-year growth of 48%.

If AMD hits the midpoint of its revenue guidance, full-year revenue will reach $6.7 billion, up just 3.5% from 2018. The company had originally expected to produce high-single-digit growth this year, but it cut its outlook to mid-single-digit growth back in July. Extreme weakness in the graphics business during the first half of 2019 made it difficult to produce anything but anemic growth for the full year.

While AMD's third-quarter results and fourth-quarter guidance didn't blow anyone away, the company continues to execute well. Rival Intel isn't sitting on its hands -- the chip giant slashed prices for its upcoming high-end processors to better compete with AMD's offerings. The market will only get more competitive as Intel looks to protect its market share, potentially crimping AMD's growth in 2020 and beyond.