Advanced Micro Devices (NASDAQ:AMD) saw its revenue slump in the second quarter thanks to weak graphics card sales and lower semi-custom sales. This decline was expected -- excess inventory from the cryptocurrency bubble has hurt graphics card sales this year, and the major AMD-powered game consoles are nearing the end of their life cycles.

What wasn't expected was a guidance cut. AMD now expects to grow revenue by a mid-single-digit percentage this year, down from earlier guidance calling for a high-single-digit percentage increase. The company launched new Ryzen PC CPUs and Radeon graphics cards in early July, and its second-generation EPYC server chips are due this year. These products will drive growth in the second half, just not enough for AMD to hit its original outlook.

The computing and graphics segment, which contains PC CPUs, PC GPUS, and professional GPUs, generated revenue of $940 million, down 13.4% year over year. Segment operating income plunged to $22 million, down from $117 million in the prior-year period.

The enterprise, embedded, and semi-custom segment, which includes server CPUs and semi-custom products like the chips that power the major game consoles, generated revenue of $591 million. That's down 11.8% year over year, although profitability improved. Segment operating income was $89 million, up from $69 million in the prior-year period.

Growing sales of AMD's EPYC server processors may be behind the profit growth, although it wasn't enough to drive revenue growth with semi-custom sales in decline. AMD's chips will power next-generation game consoles from Sony and Microsoft, so this segment will get a boost when AMD starts shipping those new semi-custom chips. 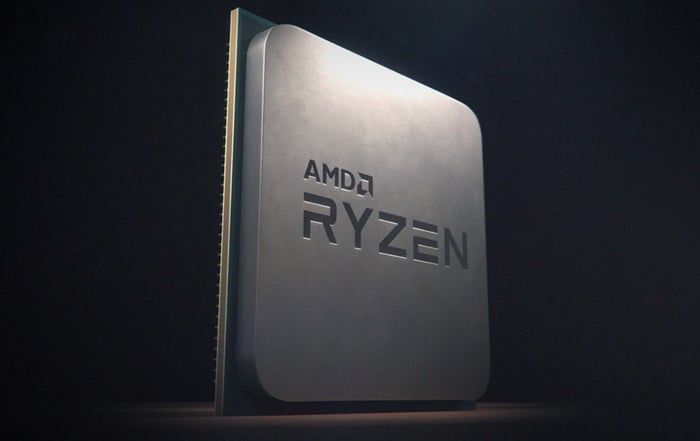 AMD now expects to produce mid-single-digit revenue growth this year, down from the high single-digit growth it was calling for as recently as its first-quarter report. Sales growth from Ryzen, EPYC, and Radeon graphics cards will be partially offset by lower-than-expected semi-custom revenue. Excluding semi-custom, revenue is expected to grow by about 20% year over year.

For the third quarter, AMD expects revenue of $1.8 billion, plus or minus $50 million. That represents year-over-year growth of 9%, although it's well below the consensus analyst estimate of $1.94 billion. The company also expects its non-GAAP gross margin to be around 43%.

While a guidance cut is never good news, it appears that AMD's lowered outlook is largely due to a weak semi-custom business. The new Ryzen and Radeon products launched in July have received good reviews, and they should be successful products for the company. In addition, AMD's upcoming EPYC chips should allow the company to continue to win data center market share.

But with shares of AMD trading at elevated levels, any bad news could spell trouble for the stock. As of market close on Tuesday, AMD stock traded for more than 50 times the average analyst estimate for 2019 non-GAAP earnings. A lot is going right for AMD, but the stock appears to be priced for perfection. And perfection is definitely not what AMD delivered with its second-quarter report.