Please ensure Javascript is enabled for purposes of website accessibility
Log In Help Join The Motley Fool
Free Article Join Over 1 Million Premium Members And Get More In-Depth Stock Guidance and Research
By Rhian Hunt - Jan 30, 2020 at 11:32AM

Sales are booming in Europe, but profits are nil, and the company could go the way of GM.

Recently plunging Chinese sales of Ford Motor Company's (F 3.23%) vehicles have slammed the brakes on the iconic carmaker's expansion into this huge overseas market. Far away in Europe, Ford's total 2019 vehicle sales rose above a million, with Germany showing particularly strong sales growth. While these two major international markets might seem to counterbalance each other, a closer look shows all is not quite as it seems in Europe, either.

With 1.27 million Ford cars and trucks sold in China in 2016, rapid double-digit declines in purchases more recently sends up a signal of potential trouble to those investing in car stocks. The slide began fairly modestly in 2017. However, in 2018 and 2019, Ford's sales in the eastern country turned into something resembling a half-million-car pileup, with 37% and 26% nose-dives respectively. Just 567,854 Fords left Chinese showrooms last year, according to Reuters.

Intertwined Chinese economic troubles and ongoing trade wrangles between the USA and China are among the major factors driving this decline. The entire Chinese car market, not just Ford, is suffering the downturn's effects. 2019 witnessed an 8.2% year-over-year fall in total auto sales from 2018.

Ford claims to be pursuing a "Ford China 2.0" scheme in response to this drastic sales crisis. This plan includes such steps as adapting vehicle production to Chinese drivers' preferences and partnering with Chinese companies to develop and manufacture autos in the region. Ford states its intention to release 30 new SUV and car models there by 2022, of which approximately a third are slated to be electric vehicles. 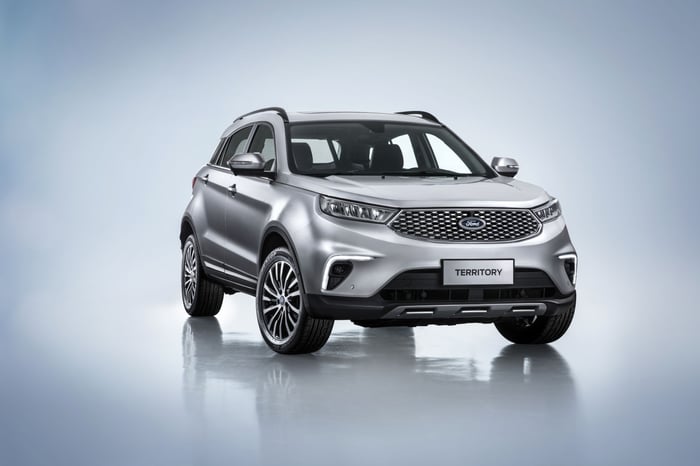 While Ford is talking big, this blueprint for a complete Chinese makeover clearly hasn't reversed the avalanche-like collapse of sales since its launch early in 2019. Ford claimed in a December report that losses in China were approximately 50% lower in 2019 than in 2018, though the actual figures won't be available until their release of detailed Q4 2019 results on Feb. 4, 2020. The statement also predicted a further 50% reduction in China losses in 2020, though Ford stressed the latter figure did not represent any kind of formal guidance.

At this point, however, it's arguable whether the slowing of sales losses from 37% a year to "only" 26% in a year is actually due to Ford's new program. Ford sales are so gutted in China, dropping from 1.3 million to half a million annually, that purchases may simply be reaching a demand floor below which they won't drop significantly as long as any kind of economy at all continues to exist in China.

Superficially, in another major international market elsewhere on the planet, Europe, Ford enjoyed a positive 2019. In the "Euro 20" countries, a Ford Q3 sales report claims total vehicle sales grew 3.1% in 2019's third-quarter year over year. While commercial vehicle sales are weakening, passenger vehicle sales grew. In Germany, sales rose 21.1%, outpacing any other country's demand. Overall, Ford reported 1,020,700 vehicles sold in Europe during the first nine months of 2019. With a quarter still to go when the figures were released, total sales likely reached 1.2 to 1.3 million for 2019, equaling Ford's sales in China during the peak year of 2016.

However, under this rosy exterior, all is not well in the state of Denmark – or anywhere else in Europe. Despite the growing number of physical sales, Ford's Q3 2019 Earnings Review shows Ford Europe continuing to bleed money, as it has done in most quarters for several years now. Revenue fell in every one of the past four quarters, starting with an 8% decline in Q4 2018 and now showing a 14% decline in Q3 2019. Earnings before interest and taxes (EBIT) has been negative for four of the past six quarters, and even in the two positive quarters, only amounted to around $100 million, a trivial sum by the standards of a huge enterprise like Ford.

Ford appears to be suffering a somewhat less dramatic replay of General Motors Company's (GM 4.00%) fate in Europe. GM made a serious effort to establish itself in Europe but could not compete with existing carmakers there. Eventually, it sold off its European brands to PSA Group (PUGOY) and retreated from Europe after losing approximately $20 billion on the attempt to break into the market there. While Ford hasn't lost nearly as much, its trajectory is similar and a parallel outcome seems likely.

What the future holds for Ford

While Ford naturally issues optimistic statements about its future prospects in both China and Europe, neither market appears to hold much promise. China sales continue their downward slalom, with no end in sight. Europe's sales are decent but revenues are declining, indicating a high likelihood Ford will ultimately fail to achieve long-term success in the face of European carmakers' competition, just like GM.

While some might think Ford's low share price indicates a rebound is coming, the company has experienced a nearly 70% drop in stock value over the past two decades. Nothing happening in China or Europe is likely to trigger an upward surge anytime soon, nor will surprises emerge in the Ford Q4 2019 earnings report. The company may muddle along, or go the way of Studebaker, but a sudden revival seems improbable. I don't recommend buying Ford shares at this time.