Please ensure Javascript is enabled for purposes of website accessibility
Log In Help Join The Motley Fool
Free Article Join Over 1 Million Premium Members And Get More In-Depth Stock Guidance and Research
By Asit Sharma - Jan 30, 2020 at 10:54AM

The tech-enriched used car sales platform dazzled investors last year. What might be in store for shares in 2020?

Given a 181% share price leap in 2019, Carvana (CVNA -3.14%) investors may be experiencing a bit of misgiving as we read the tea leaves for current-year performance. With the first month of 2020 nearly in the books, the CVNA symbol has slumped by just over 12% year to date. Is this a harbinger of further declines?

Before we answer this question, it helps to understand why the platform, which provides a complete online experience for used car buyers, enjoyed such a successful 2019. Rampant revenue growth is the most visible factor: In the first nine months of 2019, sales soared 96% against the prior-year period to $2.47 billion.

Rising gross profit also fueled investors' enthusiasm. Gross profit per unit (GPU) improved by 30% year over year in the third quarter to roughly $3,000. One catalyst of gross profit growth in particular stood out as 2019 progressed: With every passing month, Carvana is sourcing more of its used vehicles from customers (versus traditional wholesale parties). Vehicles purchased from customers in the third quarter of 2019 jumped by 249% to more than 32,000 units.

This ready supply of new inventory cuts down on Carvana's acquisition costs and helps create longer-term customers who can use the company's platform to essentially swap out their vehicles every few years. The potential value of such a customer base in the used automobile business is one of the most attractive traits of an investment in Carvana's stock. 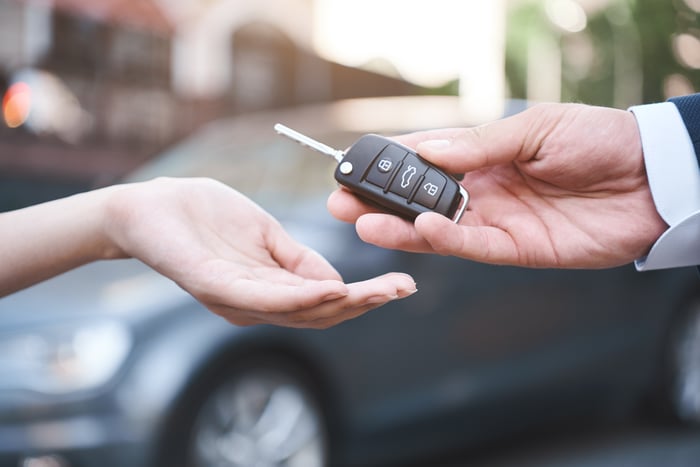 A sharpening of investor focus

Carvana plans to release its fiscal fourth-quarter 2019 earnings report on Feb. 26, and while investors will eagerly await management's growth outlook for 2020, they're also likely to focus on factors that will undergird revenue expansion over the next few reporting periods.

These include the company's addition of new geographical markets and its build-out of inspection and reconditioning centers (IRCs). Carvana's geographical reach may prove critical to stock performance this year. Previously the company updated investors each quarter on the number of new metropolitan markets it entered. But beginning with the fourth-quarter 2019 report in February, Carvana will now disclose only the percentage of the U.S. population that it reaches through established and new markets.

At the end of the third quarter, Carvana's operations reached 67% of the U.S. population, an increase of 9 percentage points from the end of 2018. Management has stated that after a brief break in the fourth quarter to focus on current sales, the company intends to resume rapid entry into new markets in 2019. Executives believe that over time, Carvana can reach 95% geographical penetration in the U.S. Note that for Carvana, "geographical penetration" means that it can physically fulfill online car sales in a given metropolitan area.

The organization's construction of IRCs will have similar prominence among performance metrics this year. Carvana currently has seven IRCs in operation, with an eighth facility under construction in North Carolina. Management has identified a pipeline of five additional sites for future construction.

Why are expansion into new markets and IRC construction so important to Carvana's stock price? Simply put, they serve as advance indicators of the company's capacity to build new sales via market entry, as well as its capacity to fulfill platform sales (which depend on inspection and preparation of used vehicles before delivery can be completed). If either of these processes begins to slow, Carvana will have difficulty sustaining the breakneck growth the stock market has come to expect each quarter.

Investors will also closely watch competitor CarMax's (KMX 2.42%) rollout of its "omnichannel" car-buying experience this year; this is its answer to Carvana's wildly successful platform. Though firmly rooted in a physical, store-based sales model, CarMax is introducing online sales, coupled with new customer service locations it calls "Customer Experience Centers" or CECs. CarMax's management estimates that omnichannel buying is now accessible to 40% of its customer base, and the used car giant plans to complete its online rollout by 2021.

An earthbound trajectory is in the cards

Carvana is currently generating net losses -- the company spilled $94 million in red ink on $2.8 billion in sales during the first three quarters of 2019. For the next few quarters, as Carvana focuses on obtaining market share, investors are likely to look past its operational losses, especially if it continues to incrementally build GPU.

More pertinently, I believe that Carvana's revenue expansion will inevitably slow this year as it works on building both market reach and car-processing capacity. While not a major threat at the moment, CarMax's entry into the online car sales business may also slightly affect Carvana's growth prospects over the next several quarters.

This isn't to imply that this growth stock will tank in 2020. The company has shown a facility for consistently exceeding investors' expectations, and it may well unveil outsize revenue growth and an ambitious outlook for the current year when it reports Q4 2019 results. But Carvana's share price drop in January signals that shareholders are ready to apply a more realistic lens to its results in the coming quarters. It's entirely possible that Carvana will outrun the market again this year. Just don't expect a repeat of 2019's stratospheric ascent.

Is Carvana Stock on the Road to Zero?

Is Carvana a Buy After Falling 93% From Its All-Time High?