And how the iPhone maker is handling the deferral accounting.

Apple (AAPL -1.07%) formally entered the streaming wars in November with Apple TV+, the company's first video-streaming service, which it has high hopes for. It's a crowded and competitive landscape, but the tech giant has the wherewithal to play the long game with Apple TV+ as part of its long-term services strategy. Apple services chief Eddy Cue has made it clear that the company is initially focusing on quality over quantity. Recognizing that the service doesn't offer much in the way of quantity, Apple is giving away a free year of Apple TV+ bundled with hardware purchases while touting the shows that receive critical acclaim.

Here's how Apple is thinking about the service. 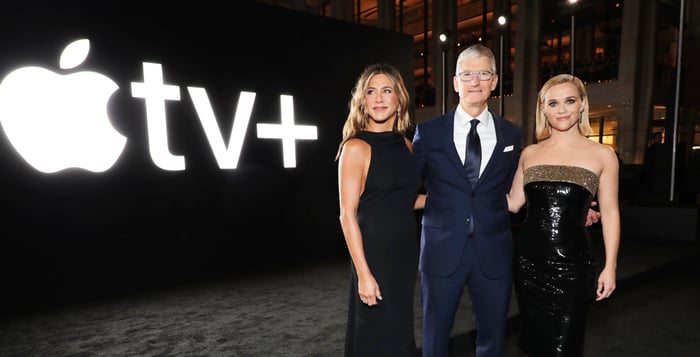 "We are primarily measuring ourselves on the number of subscribers."

One analyst on the conference call this week asked how Apple is internally gauging the success of Apple TV+. "Is it purely on critical acclaim?" D.A. Davidson Tom Forte queried. "Is it on a number of consumers that are using the service, contribution of service revenue, etc., etc.?"

CEO Tim Cook responded, "We are primarily measuring ourselves on the number of subscribers." As expected, Cook did not actually specify how many Apple TV+ subscribers there are at present, nor did the chief executive allude to or acknowledge recent third-party estimates from Ampere Analysis that peg Apple TV+ customers at 33.6 million.

"The product itself is about storytelling, and we think if we do that well, then you will find that there will be some number of those that will also be critically acclaimed, and we're seeing that with The Morning Show," Cook added. "We're seeing that with Little America and others."

Beyond how many subscribers Apple TV+ currently has, the bigger question is how many are paying for the service versus receiving the free year.

Some customers are paying

CFO Luca Maestri confirmed that there are indeed some paying customers. The promotion was widely expected to drive most of the interest in Apple TV+, considering the sheer volume of products that Apple sells over the holiday shopping season. Here's Maestri:

When you think about what goes into the Apple TV+ revenue at this point, there are two components. The paid subscribers: These are customers that pay for the service, and we recognize revenue over the subscription period. And then, we've got the, what we call, the Apple TV+ bundle subscribers: These are the customers that buy an eligible hardware device and redeem the offer for a free year of TV+ services.

Maestri also outlined how the tech giant approaches accounting for the deferrals related to the offer, which is much more nuanced than how Goldman Sachs analyst Rod Hall had speculated ahead of the service's launch. There are three inputs:

The first component is straightforward ($60), while the others require more guesswork. After looking at eligible device sales, certain reductions need to be made to accommodate things like Family Sharing, multiple device purchases, and geographic availability, according to Maestri. Overall, since the service just launched and most subscribers are likely taking advantage of the offer, the Apple TV+ revenue "that we recognized during the quarter was immaterial to our results."