Please ensure Javascript is enabled for purposes of website accessibility
Log In Help Join The Motley Fool
Free Article Join Over 1 Million Premium Members And Get More In-Depth Stock Guidance and Research
By Evan Niu, CFA - Jan 25, 2020 at 10:00AM

Giving away free subscriptions to everyone who buys an iPhone, iPad, ‌Apple TV‌, iPod touch, or Mac will boost your numbers like that.

"In the Apple (AAPL 0.71%) ecosystem, Apple Music is the number one streaming service," said services chief Eddy Cue last summer when confirming that the company's music streaming service had hit 60 million subscribers. Thanks in large part to Apple's ongoing promotional offer to give away a year of its new video streaming service free when bundled with hardware purchases, Apple TV+ has sprinted out of the gate and is quickly catching up to the music service in terms of customers.

In fact, Apple TV+ has more customers than Disney's (DIS 0.86%) competing Disney+ service, which launched at around the same time. 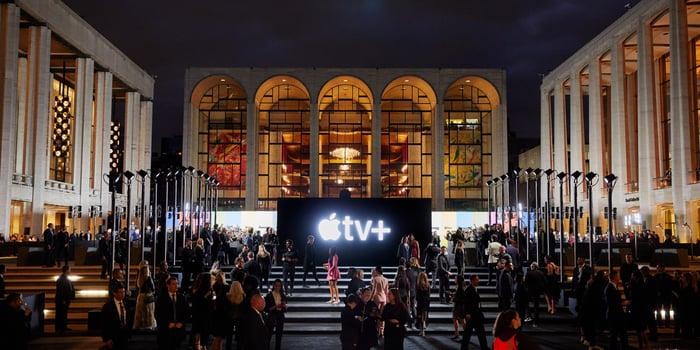 Based on these figures, the Apple TV+ customer base is already around half the size of Apple Music's, just two months after launch. But that's what happens when you sell tens of millions of devices every month and give subscriptions to your streaming service away free as a bonus with them.

CEO Tim Cook said that Apple "concluded that a great way to get more people to see the content would be to [bundle Apple TV+ for free], and it would be a good gift for our users." The Cupertino tech giant knows that its playing catch-up in terms of its catalog of original content -- which makes it harder to attract paying subscribers -- and it needs to get what it has in front of viewers if it's going to generate buzz for the premium titles that it is releasing.

Disney+ enjoyed a strong 10 million sign-ups on the first day, although that figure, too, included free trials. In addition to Hulu (which Disney controls) and ESPN+ subscribers, the House of Mouse is expected to share an official Disney+ subscriber count when it reports fiscal first-quarter earnings on Feb. 4. Disney said in November that it had 3.5 million ESPN+ subscribers and 28.5 million Hulu subscribers.

Prime Video is included in Amazon's popular Prime membership program, but not all members utilize the service. Some might just be in it for the free shipping. Amazon disclosed this week that its music streaming business now has 55 million customers worldwide, including people listening to the ad-supported tier for free.

The real test for Apple TV+ won't come until later this year when all those device buyers have to decide whether or not they're willing to pay $5 per month for the service after their free trials expire.