Please ensure Javascript is enabled for purposes of website accessibility
Log In Help Join The Motley Fool
Free Article Join Over 1 Million Premium Members And Get More In-Depth Stock Guidance and Research
By Adria Cimino - Jan 30, 2020 at 5:00AM

Aurinia’s close-to-market products make the company a good investment whether it gets a buyout offer or not.

Aurinia Pharmaceuticals (AUPH -2.24%) has a big year ahead. The Canadian biopharmaceutical company plans on submitting a New Drug Application for what could become its first marketed drug to the U.S. Food and Drug Administration, and it expects to report data on its phase 2/3 trial for what eventually may become its second product on the market. Revenue sources are on the horizon, and that is one good reason to buy the stock now. Another reason is a bet on a takeover by a larger pharmaceutical company eager to get its hands on new products. 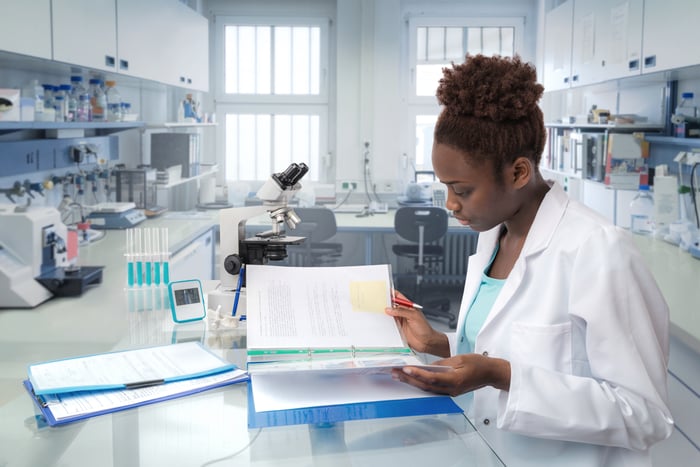 So let's talk products, and therefore revenue, first. Aurinia has developed voclosporin for the treatment of lupus nephritis. As many as 1.5 million Americans suffer from systemic lupus erythematosus, an autoimmune disease primarily affecting women that causes inflammation in connective tissues. According to the Lupus Foundation of America, up to 60% of those patients will develop lupus nephritis, or an inflammation of the kidneys that, if uncontrolled, can lead to kidney failure and even death. Aurinia's voclosporin is an immunosuppressant and therefore blocks immune system responses when, in cases like lupus, those responses are destructive. The compound was given in combination with immunosuppressant mycophenolate mofetil and low-dose corticosteroids, and trial results showed voclosporin could increase the speed of kidney response rates. Currently, the standard treatment is mycophenolate mofetil or another immunosuppressant taken alone.

In October, Aurinia announced the start of patient dosing in its phase 2/3 trial of voclosporin ophthalmic solution for dry eye syndrome. Aurinia expects to have top-line results by the second half of this year. This is a vast market with room for new treatment options. The global dry eye syndrome market is expected to reach $6.2 billion by 2024, research by Mordor Intelligence shows. Corticosteroids are most widely used to manage symptoms, but over time they may result in serious side effects such as an increase in intraocular pressure.

Last year, an analyst at Mackie Research Capital predicted that voclosporin ophthalmic solution would generate $450 million in sales. For the lupus indication, sales of voclosporin have been estimated from more than $1 billion to as high as $2.2 billion -- in either case, taking it into blockbuster territory.

So who wants to buy access to a potential blockbuster? Many pharmaceutical companies with aging drugs and patent expirations weighing on future revenue. The market has speculated on an Aurinia takeover for a while, with news articles as far back as in 2016 mentioning a possible buyout. So far, the company has gone forward with its clinical programs alone, and investors betting on a takeover have had to be very patient. The fact that takeover speculation has lingered for years doesn't mean it won't ever happen. With one product ready for FDA review and another close behind, this year might be a key moment for the company to attract a buyer. That means if you've invested in Aurinia hoping for a buyout, hang on a bit longer, and if you haven't, this is probably the best time to make that bet.

But what if Aurinia doesn't get a buyer?

The show must go on, and thanks to Aurinia's planning, it will indeed. The company said in its third-quarter financial report that it has the financial resources to fund the lupus nephritis program, conduct the dry eye clinical trial, continue a Phase 2 trial for a third voclosporin indication, and fund operations into the fourth quarter of 2020. In December, Aurinia raised $191.7 million in gross proceeds through an offering of common shares and plans to use the funds to pay for product launch activities as well as general corporate purposes. The company expects to submit the voclosporin for lupus nephritis to the FDA in the first half of this year and is planning on a commercial launch in early 2021. If investors don't get the buyout story they were hoping for, the revenue stream from a marketed drug may not be too far down the road.

Aurinia shares are trading at more than $18, surpassing even the highest analyst price target of $14, so this might not be a "buy right this second" stock. But investors might want to use any weakness in the shares as an entry point. They've fallen about 9% since the beginning of the year, so for a biotech investor interested in the long-term potential of this company -- or the buyout possibility that could happen at any moment -- a purchase around this level is reasonable.