Please ensure Javascript is enabled for purposes of website accessibility
Log In Help Join The Motley Fool
Free Article Join Over 1 Million Premium Members And Get More In-Depth Stock Guidance and Research
By Keith Noonan - Jan 30, 2020 at 11:33AM

The market is bearish on the video-focused social media company, but investors might want to go against the grain.

JOYY (YY 3.68%) is a player in the social-media space that could post big growth over the next five years, but you probably wouldn't guess it based on the stock's recent performance.

The Chinese company, which was known as YY before a name change in December, has expanded its product offerings and appears primed for expansion, but the stock has languished due to a slowdown for one of its main platforms and crackdowns on video-streaming services in China.

The recent sell-offs in the broader market stemming from concerns about the spread of the coronavirus have made JOYY stock even cheaper. Shares trade at roughly 11 times this year's expected earnings, and the company is also valued at less than 1.4 times expected sales. For investors seeking exposure to video-focused social media in emerging markets, JOYY stock is an attractive play that could deliver big returns. 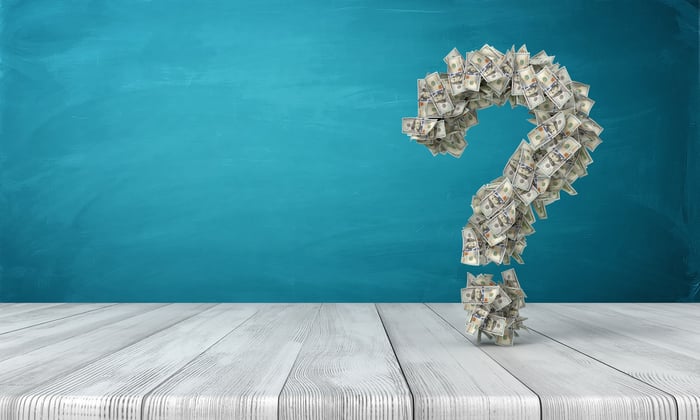 An appealing collection of social-content platforms

Part of the appeal of JOYY's business model is that the company shoulders little in the way of up-front content costs. While a platform like iQiyi (a streaming video platform often referred to as "China's Netflix") has to invest substantial resources to produce original films and television series and acquire the rights to third-party content, JOYY's model is capital-light on the content side of things because it relies on users to create the videos that attract its audience. JOYY splits revenue from donations made to broadcasters on its core live-streaming platforms, and it sponsors some original content, but costs are relatively low.

The company is already solidly profitable and still has big growth potential, but the market has been hesitant to give the business credit amid threats from competing platforms, macroeconomic threats including the U.S.-China trade war, and pressures from Chinese government regulations. Shares are down roughly 18% over the last five years despite substantial growth for the company's revenue and earnings. 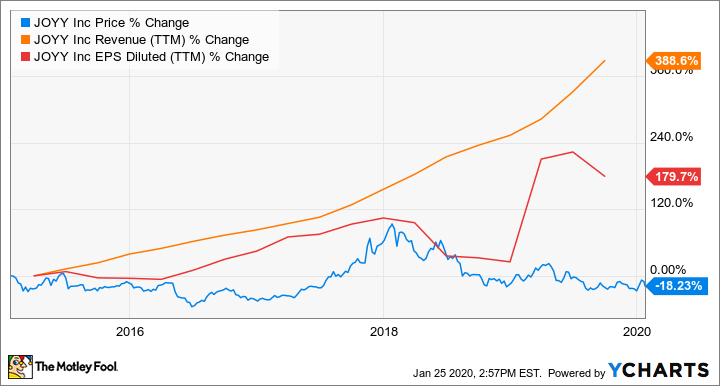 It's important to note that the company's recent sales growth has been aided by its acquisition of Bigo, a video-focused social media company based in Singapore. JOYY closed the $1.45 billion acquisition last March and has gotten a significant sales boost as a result, but Bigo is still operating at a loss and has actually been a drag on earnings.

JOYY posted substantial sales and earnings growth in the four-year period leading up to the Bigo acquisition without getting much credit from the market. While there will be some near-term profit headwinds from the new unit, the stock looks even cheaper following the integration.

JOYY has reduced its risk and increased its growth potential

The Chinese government has made a variety of moves to crack down on streaming platforms over the last few years, and it's reasonable to expect that regulators will continue pressuring companies that host user-generated material. Compared with the U.S., China has strict content standards, and videos that promote anti-government sentiment or violate decency codes attract the attention of regulators and can result in penalties for streamers and hosting platforms.

While Chinese censorship continues to present a significant threat to the company, JOYY now has a substantial user base outside of its domestic market. At the end of the company's third quarter, 77.9% of its 470.1 million average monthly active users were outside of China. Much of this geographic diversification has been achieved thanks to the company's Bigo division -- which has a large user base in Southeast Asia and recorded 212 million monthly average users for its IMO video chat and messaging platform and 21.9 million for its live-streaming platform Bigo Live last quarter.

Slowing growth for JOYY's YY Live streaming platform in its domestic market and the potential threat posed by regulatory moves from China's government prompted the company to diversify its business, and it looks stronger as a result of the move. It retains a majority stake in Huya, the fast-growing gaming video content live-streaming platform it spun off in 2018. And the Bigo acquisition gave the company valuable new reach in geographic territories and product segments.

Other territories should continue to grow their revenue contribution. Roughly 34% of JOYY's live-streaming viewers were based outside China in Q3, and the company has avenues to increase revenues from BIGO Live and better monetize other product categories.

JOYY gained a fast-growing platform in the short-form video category courtesy of the Bigo acquisition. Its Likee platform (a competitor to ByteDance's TikTok) managed to hit over 100 million monthly active users at the end of the third quarter, up 413% year over year. JOYY has yet to hit the accelerator on monetizing Likee, and it should be able to ramp up advertising and premium-service monetization on its IMO video-chat app as well.

JOYY looks like a strong buy at these prices

As the company's new growth catalysts start to kick into gear, analysts are projecting that JOYY will see significant earnings momentum. The average analyst estimate is calling for the company to post earnings of roughly $7.39 per share in 2021 based on current exchange rates, and JOYY is trading at just eight times that target.

BIGO Live and IMO are both evidencing encouraging momentum and should help JOYY expand its earnings base outside the Chinese market. Its Likee short-form video platform is growing at a rapid pace, Huya continues to expand its total viewer base and number of paying viewers, and YY Live continues to grow (albeit at a relatively slow rate compared with its other businesses).

As it stands, JOYY looks like an appealing growth stock that trades at an attractive valuation. Shares present great value at current prices, and the stock stands out as a strong buy for investors seeking exposure to video streaming platforms in China and other fast-growing markets.