Please ensure Javascript is enabled for purposes of website accessibility
Log In Help Join The Motley Fool
Free Article Join Over 1 Million Premium Members And Get More In-Depth Stock Guidance and Research
By Billy Duberstein - Jan 30, 2020 at 9:50AM

The company crushed earnings, and its lofty valuation is more than justified.

Though Microsoft has perpetually been considered somewhat expensive in recent years, that hasn't stopped the company from regularly crushing earnings estimates, with the stock following suit on the way to incredible returns. The trend continued last night when the Redmond, Washington-based tech conglomerate reported strong second-quarter fiscal earnings, with the stock surging some 4% in after-hours trading.

And yet, some might still scoff at Microsoft's rather lofty forward P/E ratio north of 30, based on analysts' estimates for the current fiscal year ending in June. This may be especially true since some of its other large-cap technology peers are growing revenue at a faster pace, yet with valuations below that of the cloud and software giant.

However, Microsoft is actually far cheaper than these metrics would suggest. Here's why. 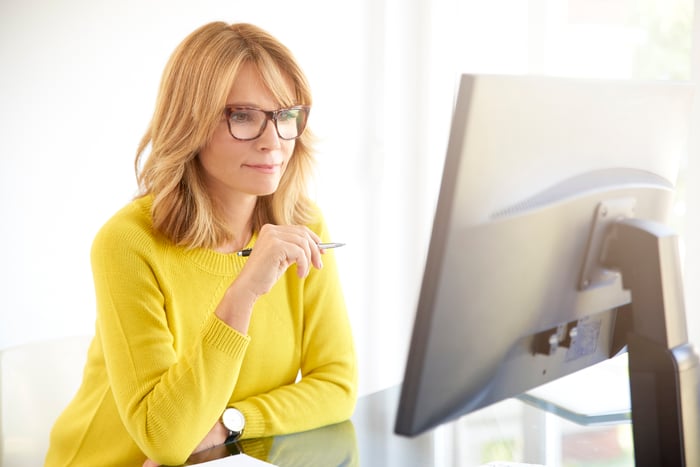 Microsoft is a more attractive value than it looks. Image source: Getty Images.

At first glance, when comparing it to large-cap peers, Microsoft may seem like it's punching above its weight:

As you can see, Microsoft is only growing revenue in the mid-teens at 13.7%, far below the growth posted by rivals Alphabet at 20%, Facebook at 24.6%, and Amazon at 23.7%. With the exception of Amazon, which has its own unique spending philosophy, Microsoft is more expensive than these other two large technology companies on a forward P/E basis, and significantly so. It's also far more expensive than Apple, though Apple doesn't have the growth profile of these other software-based internet behemoths.

However, shareholders don't get paid buybacks and dividends with revenue, but rather, from profits. On that front, Microsoft is crushing its large-cap rivals:

While much of this market is obsessed with top-line growth, Microsoft's tremendous profit growth makes it far cheaper than it otherwise looks on a revenue basis alone. In fact, it's the only stock in the group whose profit growth rate exceeds its forward P/E ratio.

How is Microsoft pulling this off?

Microsoft is obviously generating a tremendous amount of operating leverage, meaning it doesn't have to add much in the way of cost in order to bring in new revenue. In fact, Microsoft's cost of revenue actually went down in the recently reported quarter, which is somewhat miraculous.

This is in stark contrast to Alphabet, which is investing heavily to try and catch up to Microsoft and Amazon in cloud computing, not to mention spending heavily on its "moonshot" Other Bets segment, whose ultimate return is uncertain and may be far off. Facebook, coming off of the controversy surrounding its role in the 2016 U.S. presidential election, has had to invest heavily in more effective controls, not to mention high legal expenses. And Amazon has also been spending big as it invests in one-day shipping on its e-commerce platform.

Oh, by the way, all three of those companies are now the subject of federal antitrust investigations into their business practices. Even Apple has been included in these federal probes for the high fees it charges developers in its App store.

But while Microsoft has been the subject of antitrust investigations in its past, it currently appears to be in the good graces of the U.S. government, even winning the JEDI contract with the Department of Defense in the fourth quarter -- a win that is currently being challenged by Amazon. Meanwhile, it appears that Microsoft has already built out enough data centers to handle the incoming Azure cloud revenue, which clocked in at a whopping 62% last quarter, a notable acceleration over the prior quarter's mere 59% growth rate.

To be fair, memory and storage prices have crashed over the past year, perhaps contributing to the tailwind. It may also be the case that Microsoft is holding back data center investment, filling up its current footprint with new customers. And the company's margin is also benefiting from the downturn in console sales ahead of the late 2020 Xbox release, as gaming consoles are lower margin.

However, I think the margin expansion story is more real than not. Microsoft's core high-margin Office and Dynamics software platforms continue to grow at a healthy clip, as does LinkedIn. These software-as-a-service offerings are highly efficient, as Microsoft delivers the latest and greatest version over the internet, without having to invest in physical disks or installation. And Azure's margins should continue to expand as data centers get utilized at a higher rate.

In other words, Microsoft's core software businesses and Azure cloud business appear to be getting more efficient, even as they grow. That's a winning combination.

And revenue could be on the verge of accelerating

Not only is Microsoft outgrowing its cost base, but its rather pedestrian top line could very well sustain for many years or even accelerate, due to the higher-than-average growth of the intelligent cloud segment.

Whenever a company has a smaller segment growing at higher rates than a larger one, that's a recipe for potentially massive investment gains. That's because the market may only be focused on the company's overall top line, without realizing the sustainability of that growth rate, or the potential for it to even accelerate. And if that smaller segment is more profitable than the larger one, all the better.

That appears to be what's happening with Microsoft at the moment, so it's no surprise to see the stock outperforming peers this earnings season, even at its seemingly "high" relative valuation.