The stock rallied ahead of earnings, but possible short-term weakness in China looms. Buy on the likely pullbacks.

Starbucks (SBUX 0.04%) just reported blockbuster growth during its fiscal 2020 first quarter, a strong follow-up to the accelerating results during 2019. Higher numbers were supported by a growing store base and higher comparable-store sales (or comps, a combination of foot traffic and average guest ticket size) in China, as well as a big comps increase in the U.S. that bucked the negative trend in the industry during the last quarter of calendar year 2019.

In spite of the positive report card, I'm holding off on making any more purchases of Starbucks -- for now. The stock already rallied over 15% from its lows registered over the autumn months, and complications from the Wuhan coronavirus in China caused management to remove its sales guidance for the time being. Until there is some clarity, shares could get volatile, which usually means buying opportunity.

Higher sales but with an asterisk

The good news is that global comps growth, led by comps increases in the two most important markets -- the U.S. (up 5%) and China (up 3%) -- as well as positive traction in Starbucks' retail division distributed by Nestle, led to across-the-board advances.

Also adding to the strong numbers was a 16% increase in store count in China, bringing the total to 4,292 at quarter-end (or over 13% of the total 31,795 stores in operation). Some 600 more locations are in the works for the year ahead. Growth in China is great news, but the coronavirus outbreak in China has garnered a lot of headlines; and though it's highly unlikely to derail economic growth for any time period longer than the extreme short-term (thousands of reported cases at this point barely even registers on the global scale), travel bans and other government measures to limit the spread of the illness could cause some minor business hiccups.

So far, Starbucks has closed more than 2,000 locations as it works with Chinese officials to help limit the spread of coronavirus. Granted, it's normal for stores in China to close down or reduce operating hours during this time of year because of the Chinese New Year celebration. Plus, management said it is looking at how to reroute traffic to those stores left open to account for the closures. However, it remains to be seen if more locations will be shuttered due to the virus, and for how long.

Management said it was going to raise its fiscal 2020 outlook (previously for global comps growth of 3% to 4% and revenue growth of 6% to 8%); however, in light of the uncertainty surrounding coronavirus and how it will affect operations in China, any outlook on results is being removed for now. And if there's anything the stock market dislikes, it's uncertainty. In the days since the fourth-quarter report, the stock has given up about 7% of its value in spite of the exceptionally good start to 2020, and more volatility could be in the cards if the disruption in China continues. 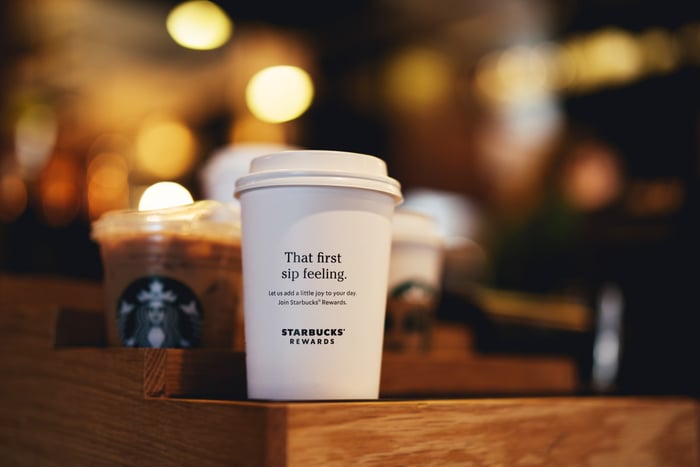 Artificially intelligent coffee to the rescue

Beyond what may (or may not) be a disruptive force for the next couple of weeks or months, there is plenty still going right for the coffee giant. Comps increases aren't just happening by accident. Starbucks is driving more traffic and higher sales at its stores via its digital strategy, specifically pertaining to its app and loyalty rewards program. In the U.S., there were 18.9 million active members at quarter's end (a 16% increase over a year ago) and 10.2 million in China (a 40% increase). Seasonal drink specials and AI-driven suggestions and notifications via the app are encouraging patrons to return more frequently.

AI is quickly becoming an even larger part of Starbucks in-store as well. The AI-enabled Mastrena 2 espresso maker made its way into 900 stores last year, and another 4,000 will be deployed in 2020. Besides churning out more coffees at more consistent quality, equipment with intelligent software built-in will help Starbucks predict what customers want and when. Early work in this regard through the app and tailoring the revolving menu and happy hour deals has been a big reason for Starbucks' resurgence in comps, and the hope is more of the same can be generated by bringing that software into the stores themselves.

Thus, there's still plenty to like about Starbucks, and it remains one of the best consumer discretionary companies around in my book. With uncertainty making the immediate future hazy, I'm holding off for the moment before scooping up any more shares. But if a pullback ensues, it will be time to buy again as the chain continues to lead the coffee and restaurant industries forward with best-in-class technology and consumer-centric strategy.